"Goodbye Africa, goodbye south Asia; goodbye glaciers and sea ice, coral reefs and rainforest; it was nice knowing you, not that we really cared. The governments which moved so swiftly to save the banks have bickered and filibustered while the biosphere burns."

Last Day: When we arrived in Copenhagen 16 days ago, we were met by Ross and Hildur Jackson, our hosts at a farm near Birkerød, just outside the city. Hildur had been organizing the Windows of Hope meeting at Christiania and Ross had been drafting white papers and talking points for the Global Ecovillage Network to share with delegates during the negotiations. Ross intends to expand his central position paper, The Breakaway Strategy, into a book soon, and the core of that document turned out to be remarkably prescient as to the outcome of COP-15.

In The Breakaway Strategy, Ross prescribed the ideal components of a fair and binding climate treaty:

The “Kyoto approach” of negotiating CO2  reduction targets, credit bargaining, technology transfer and who pays what to whom — fails all four criteria. If there was any doubt, we need only revisit these past two weeks.

Ironically — and the irony was heightened by the decision of the Danish government 4 days ago to exclude the non-governmental organizations (“NGOs”) from the Bella Center — at least three proposals had been put forward by the NGO community over the last two years that fulfill all four criteria. They are:

To Ross’s three we would add two Irish NGO proposals, Cap and Share and the Carbon Maintenance Fee, based on New Zealand’s prototype Land Use and Carbon Analysis System (LUCAS) to provide a robust and comprehensive carbon reporting and accounting system. Admittedly both of these additions involve more government involvement (and potential for corruption) than the simpler Carbon Board solution cited in The Breakaway Strategy.

The strategy has two components, a top-down political initiative, and a bottom-up civil society initiative. Recognizing that the major powers are locked into a national interest battle and unable to act in the global interest, the strategy turns to some of the smaller nations, such as Maldives and Tuvalu, that are freer and more committed to take on leadership. The Carbon Board, which allocates pollution on a per capita rationing system, is just one example of how such a partnership can function in practice. It administers a reward and punishment system for policing the atmosphere, but could as easily be applied to rationing everything humans are ruining or depleting to extinction — fisheries, food, water, or phosphorus, for instance.

The first step would be for the organizers to leave the World Trade Organization (WTO), hence the name breakaway. The WTO is a major part of the problem because it prevents individual nations from introducing environmentally friendly production methods and subsidizing industries that go green.

From the start of the COP-15 meetings it became evident that a very different agenda was being worked than the Kyoto, multilateral, inclusive, transparent, “shared but differentiated” commitment process that had evolved since the United Nations Conference on the Human Environment in Stockholm in 1972. 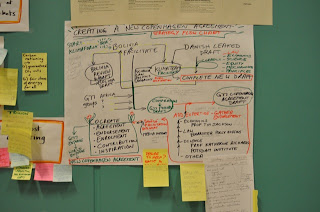 Within hours of the opening, the buzz in the halls was all about the secret text that Danish Prime Minister Lars Lokke Rasmussen had been circulating to just the G8 parties. Inexplicably, the UN had begun to function like the WTO. Some called it an “Am-Bush.” Others called it “Kyotic.”Rasmussen, as head of Venstre, the right wing party, and a coalition including the rabid anti-immigrant party in Denmark, had become the official host of the meeting. Until midway through the second week of the COP, that role had fallen on the more capable shoulders of Denmark’s former environmental minister, Connie Hedegaard. With years of experience at the UN, and in the Kyoto process particularly, Hedegaard knew the players, the positions, and was respected as fair and impartial.

Rasmussen would, in contrast, become known for high-handed demands, back-room wheeling and dealing, mass arrest and detention of protestors on suspicion of future traffic obstruction, demoting Hedegaard on the eve of the final high-level talks, and then abruptly bringing her back in to try to salvage a deal, barring the civil sector IGOs and NGOs from the meeting midway through the second week, after putting them through torturous and repeated dawn-till-dark outdoor linestandings in freezing cold and blowing snow, and then breaking with the EU and G-77 to back the USA's “coalition of the willing” approach.

Leaving the NGOs out in the cold — literally — meant that none of civil society's detailed ideas could rise to the surface when they were most needed to break out of government sector's impasse. Instead, the US came in and tried to bully China, and China, in a geopolitical-orbit-shifting rebuke, stood firm and did not blink. The US limped home with a spin-doctored document, while China was revealed as the emerging world power to be reckoned with. Some of that had to do with China’s massive investments in Africa and the two-thirds world over the past decade, which had built it a large store of political capital. Unfortunately, it spent a big hunk of that when it sold out Africa to the 5-party outcome.

Naomi Klein said, “Africa was sacrificed. The position of the G77 negotiating bloc, including African states, had been clear: a 2C increase in average global temperatures translates into a 3–3.5C increase in Africa. That means, according to the Pan African Climate Justice Alliance, ‘an additional 55 million people could be at risk from hunger,’ and ‘water stress could affect between 350 and 600 million more people.’”

Rasmussen and the G8 powers led by the Obama delegation, made their case for colonialism. What was being colonized and divided between occupying powers was not the G77, but the sky. For a mere ten billion dollars per year, G8 shareholders were sold a carbon market worth $1.2 trillion per year. Matthew Stilwell of the Institute for Governance and Sustainable Development said that rich countries were allowed to exchange “beads and blankets for Manhattan,” adding, “[They]'ve carved up the last remaining unowned resource and allocated it to the wealthy.”

With a $100 billion/year buy-out (first payment — 2020, a US election year) — or one army-year in Kabul, shared out between 193 countries, citizens from the Maldives will be offered hotel rooms in Houston the way New Orleans hurricane refugees were.

Greenpeace Executive Director Kumi Naidoo said, “In a cruel irony I have just learned that the three Greenpeace activists who, posing as world leaders, entered the Danish Palace for the State Dinner on Thursday night to unfurl a banner calling for a real climate deal are to spend the next three weeks in jail.  They will be away from their families over Christmas and the New Year. The real leaders, who attempted to get real action are now in jail, while the alleged 'leaders' got clean away, and are fleeing the Copenhagen climate crime scene in private jets and 747s.”

In the end, just five countries signed the “Copenhagen Outcome,” a mushy mishmash of voluntary pledges. They left some serious heavy lifting for November 2010, when COP-16 convenes in Mexico. There the chair will be Felipe de Jesús Calderón Hinojosa,   a man to whom Lars Lokke Rasmussen must surely have looked to as a role model to guide him on steering a fractious political process to the safe harbor of crystal chandeliers, overstuffed chairs before the fire, a snifter of Cognac, and a good cigar — perhaps Cuban.

If anyone can keep those solution-oriented NGO ideas out of the process at COP-16, it will be Felipe Calderón. 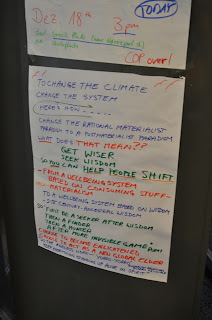 Copenhagen has failed. The UN has failed to address the most important crisis in human history. This is now the time for sanctions, boycotts and embargoes. A new alliance is needed. An alliance of hope and peace and justice must be built to oppose the axis of pollution, extinction and self destruction.

So well and nice posting , I like it.
Bathmate