Day Ten: After a day of sun came a day of very cold, but events continue here in Copenhagen, even on Sunday. Six organizations, 2 located in Copenhagen’s Free City of Christiania, 2 Agenda-21 NGOs in Copenhagen, plus LØS, the Danish Ecovillage Network and GEN, the Global Ecovillage Network, worked together to produce the Climate Bottom (as opposed to Climate Summit) event in Christiania. There have been great speakers from all over the world, with powerpoints and movies, dancing and singing. On Saturday Heikki from Finland built a sauna, which is working now. 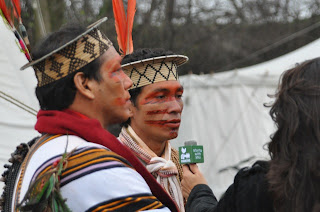 On Saturday evening we participated in a sacred ceremony of the two Ashaninca shamans from Peru, who, while out birdhunting in the jungle, had a vision that told them the world was dying. They educated themselves on climate change and decided to come to Copenhagen to see if they could help save her. The Ashaninca traditionally occupied the Sacred Urubamba Valley, in the Peruvian highlands, but when Pizarro took Ollantaytambo and the Inca fled Machu Picchu, these people resettled into the upper Amazon. There they resisted explorers and missionaries for 400 years. To say that a little bird told these men to come to Copenhagen and join with others to save the Earth would not be a metaphor.

One of the most powerful features of the Climate Bottom has been the morning ceremony, greeting each day with Medicine Story’s invocations and often highlighted with a guest from the Global Peace Initiative Of Women (GPIOW) who has brought 30-40 religious leaders from all over the world. Yesterday they had their last gathering in Christiania, and there was a large audience.

Ecovillagers from ZEGG, The Farm, Damanhur, Sieben Linden and La Kabe have come and contributed workshops.Trees-for-Life, a wonderfull treeplanting project initiated by a frenchman has the intention to plant 15 billion trees every year the next 10 years, to overcome all the losses in the rainforest regions. Already they have planted 350,000 in Senegal. On Sunday the ecovillagers from Africa gathered to meet and plan for the future. The Senegalese government wants to assist with the formation of some 12,000 ecovillages and sent a representative. After the African meeting, we had a brief GEN reunion, attended by 30 ecovillagers from all over the world.

There has been between 10-200 people coming to the Climate Bottom gatherings, talks and ceremonies, and every day it is a growing number. With Ianto Evans and Linda Smiley as the guides, on Sunday morning 250 people attended a Natural Building session, interspersed with circus performance and street dancing.

In contrast, when we traveled across town to the Klimaforum in a large hall there were also fantastic speakers — Naomi Klein, Amy Goodman, and many more — and rooms of several hundred people, but it was difficult to get close or to speak with them, to say nothing of dancing, singing and slinging cob with them, or asking probing questions about what can we do to save the planet. It was a quite a different experience.

Vandana Shiva spoke there about Soil Not Oil, and while we could agree with her enthusiastically about the central thrust of her theme, we found it dismaying that her facts on soil chemistry, especially concerning carbon farming and biochar, were severely warped and distinctly negative. As James Lovelock has said, biochar is perhaps our last best chance, and certainly our safest gambit, to save the climate from moving up 5 degrees. If 350 is the goal, biochar and carbon farming will deliver that, and quickly. When Vandana Shiva urges a standing-room-only hall at the Klimaforum to rally against biochar and carbon farming, we can only sigh and shake our heads.

We have posted a 7-minute audio clip from Vandana’s talk to our website. People can judge for themselves whether she has the science right or whether she is parroting Biofuelwatch in a version of the childrens’ game of telephone, where each transmission distorts the message a little more until at the end, it is lost completely.