Palestinian children in Gaza before: 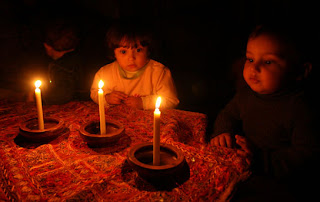 Palestinian children in Gaza after: 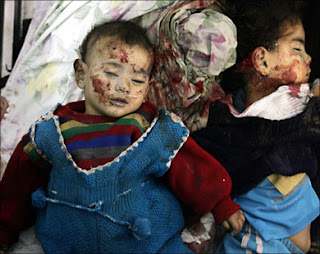 The Gaza strip is one of the most densely populated regions in the world. There are no such things as "collateral damage" or "surgical strikes" there. There is no equal guilt to go around. There are no "reprisals for rocket attacks." There is only the murder of innocents. And deafening silence from those who could prevent it.
Posted by Albert Bates at 12:32 PM 4 comments:

The Day the Earth Stood Still 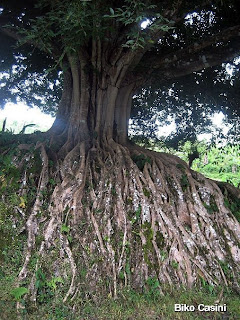 Apologies to my regular readers for the long silence, and apologies in advance because that silence is intended and still has a ways to run. I am briefly back to my home in Tennessee for the holidays, and will make a quick post, but then once more I return to travels in the far South, to a different time, in a very different part of the planet.

A friend and I went to see The Day the Earth Stood Still the first night I was back and I found it a remarkable remake of a 1951 original film that never lost its relevancy. This one, being released the week after the 14th Conference of Parties to the UN Convention on Climate Change, is as timely as The China Syndrome.

A central theme of COP-14, held in Poznan, Poland, was that humankind is bound by realities that exist independently of human wishes and beliefs. The era of faith-based science is drawing to a close. Big Science can no longer uniformly describe the many, complicated ways humanity is changing the natural world as an "unprecedented success."

I am not alone in speculating that, in the many quirky or random selections back up our DNA evolutionary chain, better brains than ours or better memes than those in vogue at present were left discarded along the way. Even the thought of giving monkeys the gift of speech, a neocortex, and opposable thumbs must be giving God acid reflux about now, as I said in my most recent c-realm interview. 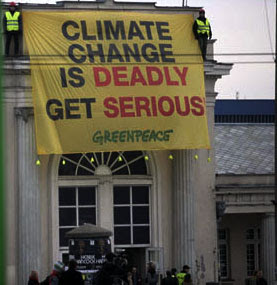 In Poznan, as in all UN conferences, progress is measured in millimeters not miles. Jeremy Leggett gave as good a summary as any of the amazing disconnect between facts and policies proposed. Greenpeace said they were disappointed with the lack of progress made and especially with the depressingly diluted EU climate package presented by Andrea Merkell. The Pew Center on Climate Change took the public stance that a “full, final, ratifiable agreement just isn’t in the cards” to succeed the Kyoto Protocol, if for no other reason than the arcane workings of the US Senate. [Note to Comedy Central: Could Al Franken’s election be the tipping point that saves the planet?] Still, there were some funds freed up by the industrial world to help the de-industrial world green-industrialize, or have a New Green Deal, whatever that means, and that gave the 9,000 delegates the opportunity to declare success and go home.

If there was a highlight, it was Al Gore endorsing resetting the compass at 350 ppmv CO2e in a rousing talk with many extended ovations. “A year ago, nobody had ever heard of 350. But it turns out it’s the most important number on the planet,” remarked Bill McKibben, self-congratulatorily. Undergirding Gore’s shift was the release of the International Energy Agency’s World Energy Outlook 2008 that warned, “Without a change in policy, the world is on a path for a rise in global temperature of up to 6°C.” Six degrees would be The Century The Earth Stood Still, although surprising few in politics or mass media seem to grasp that. Odd, because one would think a 2-meter sea level rise, desertification of one third the planet and permanent drought over much of the rest, plus the loss of all inland glaciers that provide water to a billion people would be the stuff that sells soap and raises soapboxes. If we consider that the Dust Bowl was a sustained decrease in soil moisture of about 15%, then what effect might a decline of soil moisture in the 20 to 50% range over most of the South and Southwestern US (not to mention Southern Europe, the Asian steppes, Africa and Australia) by as early as 2050 have on the news cycle?

As I came back into this civilization this week, passing through airport lounges with CNN monitors and stands of the Wall Street Journal, I could not help but notice how deceiving it all was. I mean the ongoing collapse and Christmas shoppers' denial. As Catherine Austin Fitts elegantly expressed:

It is difficult for me to express how upset I am with investors being misled by traditional portfolio strategy. Let me state for the record: there is no such thing as a diversified portfolio when most stocks and bonds represent companies or municipalities that are dependent on federal government funds. In addition, there is a difference between a traditional business cycle and a financial coup d’etat. Finally, if the rule of law is not available to ensure functioning markets, all bets are off. There are some things that even zero percent interest rates and an infinite amount of loans from the Fed and the Treasury can’t solve. 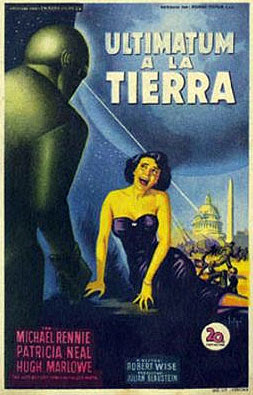 And there are some things that government cannot solve, although it can certainly exercise leadership in pointing a way to solutions. Take the existential crisis now spread before us, and advancing like replicating nanobots.

Ultimately, it comes back to learning how to live on this fragile blue island in space. Can we, as Jennifer Connelly/Patricia Neal’s character urges upon Keanu Reeves/Michael Rennie’s character, change? Do we really have that capacity? Do we understand what that might entail? We don’t have long to wait before we will find out. COP-15 in Copenhagen is now less than a year away.
Posted by Albert Bates at 11:25 AM 2 comments:

Okay, it took just enough nudges, especially from the elders, to get me to change the look of the site. I can appreciate that some eyes have a harder time with white on black than others, and I am feeling much less black now anyway, so thanks for those suggestions, and keep 'em coming.