"The scope and speed of the climate changes, our lack of information about coupled systems, and our limited ability to influence human behavior all make it probable that more large surprises lie ahead." 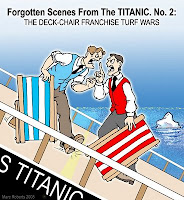 We take no relish nor revel in saying we told you so. We will be long dead before the really worst of our best predictions will unfold. Our brief remaining lifetime will be punctuated by shocking glimpses of the shadows our future throws, tinged with remorse because though we tried, we were unable to reverse or mitigate any of this.

And now we can only look into the eyes of our grandchild and inwardly weep. There is no going home for prophets.

The New York Times this morning compared Thursday’s event to canning pickles: “[I]f a person had filled a million quart jars with air, about [400] quart jars of carbon dioxide would have been mixed in.”

Back in the mid-1980s, when we were writing Climate in Crisis, we took a more circumspect outlook:


The enormity of the crisis we have so recently discovered offers no reassurances. The scope and speed of the climate changes, our lack of information about coupled systems, and our limited ability to influence human behavior all make it probable that more large surprises lie ahead.

When Venus spun away from the sun almost 5 billion years ago, it was essentially the same size and composition as Earth. Today Earth is a blue water world with an oxygen atmosphere and abundant life. Venus is a lifeless, bone-dry rock shrouded in dense clouds of sulfuric acid. The surface of Venus is hot enough to melt lead.

Without its thick clouds, Venus would be approximately the same temperature as Earth. However, because its carbon dioxide atmosphere traps infrared radiation 100 times more efficiently than our atmosphere, Venus is 750°F hotter. Could Venus have once been like Earth, a blue planet covered by oceans? Could Venus's atmosphere, eons ago, have begun a carbon dioxide exchange cycle that got away and changed that planet forever? Could a runaway greenhouse effect have consumed its oxygen, evaporated its oceans, and turned its surface into a hellish oven incapable of sustaining life in any form?

As we look around the worlds within our solar system, we see no other life-bearing planets. This is the only one. Many of the processes which brought us to our present circumstances are processes that are capable of being reversed or overcome by new processes. We are taking enormous risks by tampering with our spaceship.

And yet we neither fully understand nor appear to consider these risks serious enough to give us pause.

By and large, ignoring screaming environmentalists and only going by the paper of record, most people still do not consider the risk of a runaway climate serious enough to give them pause. After all, its only too many pickle jars.

Quoting again from the Times:


Climate-change contrarians, who have little scientific credibility but are politically influential in Washington, point out that carbon dioxide represents only a tiny fraction of the air — as of Thursday’s reading, exactly 0.04 percent. “The CO2 levels in the atmosphere are rather undramatic,” a Republican congressman from California, Dana Rohrabacher, said in a Congressional hearing several years ago.


The Times then compared our situation to having a bad day in the bar.

“If you start turning the Titanic long before you hit the iceberg, you can go clear without even spilling a drink of a passenger on deck,” said Richard B. Alley, a climate scientist at Pennsylvania State University. “If you wait until you’re really close, spilling a lot of drinks is the best you can hope for.” 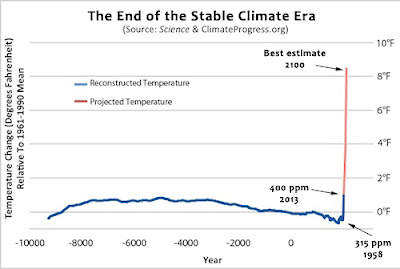 We are descendants of creatures that lived in trees, swung from branch to branch, and addressed only those decisions immediately in front of us, like securing the next branch without missing our grasp, or ingesting enough fruit to quench our appetite. We sapien animals are linear thinkers, and solve problems in sequence, based on a narrow recognition of patterns, strongly influenced by our biological history. We do not see out-of-the-frame existentential threats, usually, or take them more seriously than children’s stories. We do not, as a broad population, recognize patterns that require understanding atmospheric chemistry or advanced mathematical modeling. We are more secure in attributing our personal hardships to the machinations of demons and gods; and our successes to our physical prowess and quick thinking.

And thus we drift, as Einstein said, “towards unparalleled catastrophes.”

Posted by Albert Bates at 1:04 PM No comments: