"When it rains, it pours.  We have long been asking for solid texts that would allow for real negotiations and now we’re getting them in droves.  This momentum is critical and puts us on a path to make serious progress on the issue we’re all here to solve—dangerous climate change."

Day 8: When Kyoto was teetering on failure, the knight on the white horse was Al Gore, who shifted the US delegation’s stance, tugged at elbows, and got a deal. That Bill Clinton never submitted it for ratification (and that the Republican-controlled Senate never would have ratified) is a continuing shame, if for no other reason that as a non-signatory, the US is not a party to talks as to the future course of the Kyoto protocol after it expires in 2012.


Today, the Chair of the Ad Hoc Working Group on Further Commitments for Annex 1 Parties under the Kyoto Protocol (AWG-KP) released a new draft text outlining progress to date. This joins two other texts released today, including from the Ad Hoc Working Group on Long-Term Cooperative Action (AWG-LCA) and the Alliance of Small Island States (AOSIS). The release of all three texts today breathes new life into the second commitment period of the Kyoto Protocol.

There is also a new white knight, and she could once more be a USAnian, this one a bit more of a surprise. At the start of this week Lisa Jackson, the administrator of the US Environmental Protection Agency said that irrespective of the outcome in Copenhagen, and irrespective of what the US Senate does or does not pass, the greenhouse gas emissions of the USA will be capped and will be going down.

In May 2006, in Massachusetts v EPA, the Commonwealth argued that the Clean Air Act provides that the head of the EPA ‘shall’ regulate new vehicles ‘which in his/her judgement cause or contribute to air pollution which may be reasonably anticipated to endanger public health or welfare’. Historically the EPA had decided not to regulate greenhouse gases and the Bush Administration’s position on climate change was that there wasn't any.

Massachusetts and 11 other states fought the Bush lawyers through the courts. In 2007, in a spectacular victory, the Supreme Court ruled that greenhouse gases should be included in the Clean Air Act.

In March 2009, EPA proposed a new rule, and 400,000 public comments were received.  This week, that rule went into effect. Jackson said, “The Clean Air Act allows us to do what it does best, make reasonable cost effective regulations.” She let it be known to other Copenhagen delegates that the US would lead, not follow when it came to enforcement.

With her new tools, Lisa Jackson is now doing what others, including the chief US negotiator for Copenhagen, Todd Stern, are just pledging. She is bringing down emissions, backed by fines — and even imprisonment — of carbon polluters. 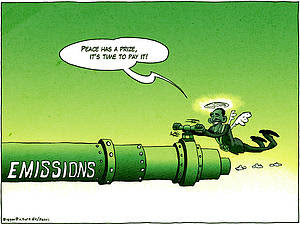 When Barack Obama said in Norway, “the world must come together to confront climate change. There is little scientific dispute that if we do nothing, we will face more drought, famine and mass displacement that will fuel more conflict for decades” he was at the same moment, through his EPA Administrator,  backing those words with action.

Completing the role reversal was the failure of the EU today to advance its pledge for an emissions cut that would keep temperature checked at 2 degrees. At the European Council meeting, held today in Brussels, the EU failed to move beyond its offer to reduce emissions by 20 per cent - even though 40 per cent by 2020 can be achieved without any greater domestic effort. The EU also failed to make any progress in tackling so-called "hot air" — the surplus emission allowances held by several Eastern EU Member States— and the accounting tricks associated with land use and forestry emissions. One NGO observer said,  “As they can set the bar as high as they want to, it could allow a handful of Member States to predict doom, only deliver disaster, and then claim credit for the difference.”

Assuming we are not arrested, tomorrow we’ll have coverage of the big demonstration here. You can follow the action live starting around noon.