"We need to get to above-the-line climate solutions with the same urgency as beach communities spying an approaching tsunami."

When we were young our parents made a bargain with us. If you will not drink or smoke until you are 21, they said, we will buy you the car of your choice on your 21st birthday. Both of them were recovering alcoholics and we could well appreciate their intentions. And so, at age 13, we took the deal. In our wild adolescence, through High School prom nights and fraternity football weekends, we were always the designated driver.

When the long-awaited birthday arrived, in 1968, our choice was a 1953 MG TD open-seated roadster. It was built on the famous Morris MG-Y green oak chassis so you could actually feel the car bend around curves or from the torque as you went quickly through the gears. It had high-ratio rack-and-pinion steering, not introduced in American cars until the 1974 Mustang. The interior furnishing and finish, the tuck and roll leather, the door panels framed in burr walnut, the instrument panel set in book-matched veneer, all amazing for a $1000 used car. 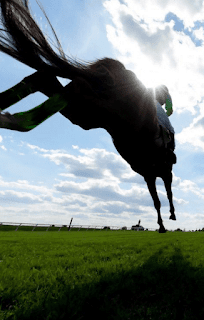 There were no fuel or oil pressure gauges, but it came with a crank starter in case the battery died. It had a top speed of 77 mph (we know because we blew a piston when we ran it up to 100 on the interstate between Albany and Syracuse) and did 0–60 in 18.2 seconds. It was not exactly a Tesla, but at that time, with the ragtop and windscreen down, goggles and silk scarf on, being pushed back into the leather seat as it accelerated was ineluctable.

It is all about acceleration. Sometimes you experience it so powerfully that you never forget.

We are preparing now for next month’s conference of the parties to the UN Framework Convention on Climate Change, COP-23 in Bonn, Germany. The Global Ecovillage Network, buoyed by a successful Indiegogo crowdfunding campaign, will be there in the Bula zone with its meticulously well-organized program. Our niche falls at the nexus between carbon drawdown and sustainable development. 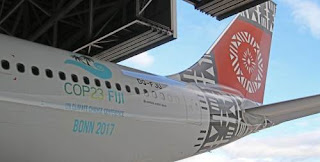 Sustainable development has become something of an oxymoron, we acknowledge. It needn’t be. It is unfortunate how the terminology gets used these days. By sustainable development, the UN implies unlimited capacity for physical growth using an extractive economy. It should instead imply directed de-growth of that economy while simultaneously developing harmonious relationships with nature and each other in a sustainable spiral of endless improvement in the quality of life. Better, not more.

These sorts of things should really not be being negotiated by government leaders because that is already limiting discussion to the viewpoints of people who are only looking to their next election cycle or succession to the throne. “Development” means to them anything that can be promised to their people — whether delivered or not — to assure they, personally, remain in power.

The sense of acceleration that excites us now is how serious the discussion is getting. No doubt getting slammed by successive category 5 storms, unprecedented flooding and mudslides, city-leveling wildfires, heat waves and droughts has something to do with focusing the attention. Mother Nature is seriously angry now.

Lately we have been attending the free webinars provided by the US National Academy of Sciences, UK’s Tyndall Centre, and others, bringing together various experts to look at our options in the climate arena, without all the b.s. or fairy dust (i.e.: clean coal, nuclear energy, BECCS, and geoengineering).

We could say there is a hierarchy of realistic survival choices now, in roughly this order:

The first three (above the line) are actual drawdown methods that would, if widely applied, pull carbon out of the atmosphere and return us to the Holocene from which we evolved and a climate suitable to sustain civilization.

The second three (below the line) are the “low-hanging fruit” that are the primary focus of international treaty negotiations and national or regional initiatives. 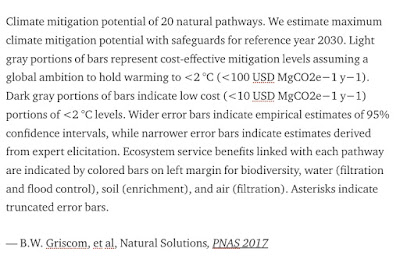 Griscom’s team, which included 32 research scholars from the USA, Scotland, Brazil, Australia, Sweden, and The Netherlands, looked at the way Earth naturally heals when its atmosphere is damaged, and asked whether that healing process could be accelerated, whether it would be enough, and what it would take in terms of land area and money. 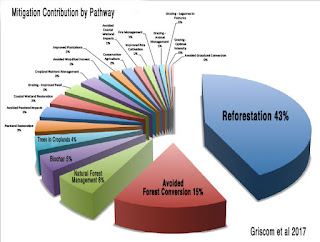 They eliminated from consideration monoculture plantations, untried “fairy dust” technologies, and anything destructive of indigenous cultures or to biodiversity. All pathways require conservation and restoration of existing agricultural fields and natural forests. Any improved land management practices must include safeguards for food, fiber, and habitat. They adopt Land Degradation Neutrality, Sustainable Development Goal 15.3.

"We allow no reduction in existing cropland area, but we assume grazing lands in forested ecoregions can be reforested, consistent with agricultural intensification and diet change scenarios. This maximum value is also constrained by excluding activities that would either negatively impact biodiversity (e.g., replacing native nonforest ecosystems with forests) or have carbon benefits that are offset by net biophysical warming (e.g., albedo effects from expansion of boreal forests). We avoid double-counting among pathways."

Books like Paul Hawken’s Drawdown or Bruce King’s The New Carbon Architecture are primarily concerned with below-the-line options. There is scant information available on what lies above.

For this reason, many people, including some climate scientists, brush off the above-the-line natural climate solutions (NCS) options, such as trees in pastures and biochar, as unproven speculation. That is a mistake. Griscom’s paper has gone a long way to correct misconceptions and mischaracterizations. 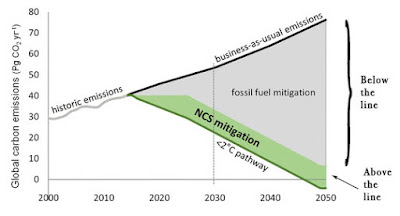