Tales We Tell Our Children

"It is difficult to imagine how anyone who encounters these stories as a youth could grow up to have anything other than profound respect for the latent power of the natural world." 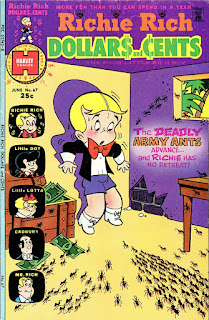 On the comments page for a popular environmental radio show a listener asked for suggestions for books or stories on nature themes to read or to give to children —  the kind that maybe influenced you when you were little.

Three titles immediately came to mind, and now seem more relevant than ever. One was set in the steaming tropics — Leiningen Versus the Ants by Carl Stephenson (in Brazil, in 1938). The other two are set in the far north — To Build A Fire by Jack London (in the Klondike, in 1910) and Master and Man by Leo Tolstoy (in northern Russia, in 1895). Why they appealed to us as a child and seem even more relevant now is because each are about battles with extreme, elemental forces of climate and about the hubris implicit in human attempts to dominate and control. In the end, each is humbling, which is a good lesson for any child.

Leiningen Versus the Ants is the story of a German colonial planter, a relative newcomer to the tropics, having only 3 years experience there, who is warned in the opening scene by a District Commissioner that the army ants are approaching and he needs to evacuate. The aristocratic planter scoffs, vows to stay and protect his work, and therein lies the tale. A Hollywood version staring Charlton Heston, The Naked Jungle, came out in 1954.

In the original, it is just the young, brash, commanding planter, whom Stephenson symbolically has given neither a first name nor an age, marshaling his troops of underpaid, overworked and easily sacrificed peons to fight the diabolical flanking and pincer movements of the besieging ants. In the end, he sacrifices himself for his tiny piece of paradise and the lives of his laborers, but defeats this elemental force by calling upon greater elemental forces.

In the Hollywood version (there was also a radio drama in 1948), it's 1901 and a 19-year-old Christopher Leiningen comes to South America to convert thousands of acres of Rio Negro terra preta to a chocolate factory. Now 34, with no knowledge of women, he recruits a mail-order bride from New Orleans. Eleanor Parker’s character is beautiful, independent, and arrives ready to be his stalwart helpmate; however, no one has told him she's a widow. He rejects her as unclean. During the next week, as she awaits the boat to take her back to the US, they are warned by a medicine man (Douglas Fowley) that legions of ants will strike in a few days' time. She joins the fight to save the plantation; their courage and his near loss of all he's worked for cements their Naked Jungle marriage.

Joanna: Do you think this moat will stop them?
Leiningen: Ants are strictly land creatures. They can't swim. Right, Incacha?
Incacha: Monkeys not swim also. They cross rivers even so.
Leiningen: The intelligence of monkeys is more than ants, less than man.
Incacha: Is so.
[laughing]
Incacha: When ants come, monkeys run.


Jack London’s tale is based on the real-life experiences of the author during the Klondike Gold Rush. A man — no need give him a name as he is the story’s only character — is braving extremely cold temperatures as he travels across the Yukon to join his companions. Instead of a medicine man to warn him of the elemental threat, he brings along a wolf-dog. This is a good thing because London’s typical characterization of indigenous peoples and their cultures was about as ignorant and incurious as most Anglo Klondikers, but his appreciation of animal intellect was much keener. 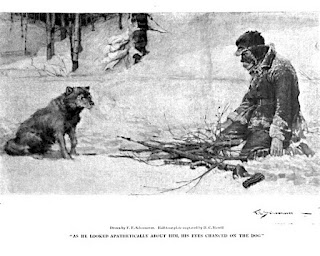 At minus 75F (−59 °C), the dog can sense that something is awfully wrong. The dog’s frightened behavior is supposed to show the man that he has underestimated his danger and get him to turn back, but no. Like Leiningen, he is stubborn, oblivious to the powers he has challenged. Likewise, the powers are entirely insensitive to him. The animal just wants badly to bug out. The man does not comprehend that because he is in the position of Leiningen to his peons — the dog is merely a slave. For the dog’s part, he feels no need to communicate, only to stick close and obtain the warmth of a fire.


One of London’s great writing talents was his ability to describe natural landscapes. In To Build A Fire his descriptive passages tell us that the seeming peace, emptiness and tranquility of the snowy landscape masks a power far greater than any mere humans. When the man abruptly falls through an ice spring and and wets his legs to his waist, the author spares 24 words to alert readers to the bigger picture: “The cold of space smote the unprotected tip of the planet, and he, being on that tip, received the full force of the blow.”


Well, here he was; he had had the accident; he was alone; and he had saved himself. Those old men were rather womanish, he thought. All a man must do was to keep his head, and he was all right. Any man who was a man could travel alone.


He does not survive.

The third title we recommended to young readers today was Master and Man and after reviewing it with the eyes of an elder now, we almost wish we could read it in the original Russian, Хозяин и работник. While translations reveal Tolstoy’s power as a storycrafter, they cannot show us his ability to apply words to paper the way an artist touches paint to canvas. 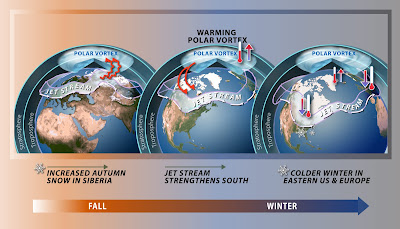 In the story, wealthy young Vasili Andreevich Brekhunov takes along one of his serfs, Nikita, for a short journey to visit the owner of a forest he is eager to purchase. He is obsessed with getting the best price, has calculated the ROI for cutting it down, would like to increase that, and is oblivious to the weather. Driving a one-horse sleigh over snowy roads, he finds himself in the middle of a blizzard, the likes of which is seldom seen.

As master and servant leave the village of Kresty ("The Crosses") Tolstoy “sets about dismantling the barrier between this world and the next:”


"As soon as they passed the last [building], they noticed at once that the wind was much stronger than they had thought. The road could hardly be seen...The fields were all in a whirl, and the limit where sky and earth met could not be seen."

Nikita would rather be close to a cozy fire somewhere but is accustomed to taking orders, despite the fact that Vasili prides himself in cheating him of his wages. The master orders they press on because, although the blizzard is blinding, they have only 4 miles to travel and competition waits for no-one. They repeatedly get lost, travel in circles, are given second and third chances to abort and take lodgings, but the master is too stubborn.

The mind of the master is preoccupied with "the sole aim, meaning, joy, and pride of his life – of how much money he had made and might still make” while the minds of the serf and the horse hear instead the “whistling of the wind, the fluttering and snapping of the kerchief in the shafts, and the lashing of the falling snow against the bast of the sleigh."

Like Leiningen, Vasili Andreevich is finally pushed by the prospect of being inevitably overpowered by General Winter to sacrifice himself for his serf, bringing home Tolstoy’s oft-repeated theme that the only true happiness in life is found by living for others. The second theme is that the elemental force of nature invariably prevails in the end and how that plays out is seldom pleasant.

We were just a child when we first read these stories and we read with the wide eyes of a child. Looking back now, it is difficult to imagine how anyone who encounters these stories at that age could grow up to have anything other than profound respect for the latent power of the natural world. Although separated by decades and distances, each of them tells the story of a strong, solitary individual who regards others, and the whole of nature, as subservient to their will, but who, after tasting reality in a most profound way, become transformed, even heroic, at last gasp.

These stories have been assigned reading for children for more than a century, in the case of the two winter tales, and more than 80 years in the case of their summery companion. They seem to have been literarily backwatered by technophilic hubris that set in around mid-20th century. But that is how each of these tales begins: technophilic hubris. And then there is a come-to-Gaia moment for each protagonist — Leiningen, The Man, Vasili Andreevich — and received wisdom. For the latter two, it comes too late. Charlton Heston, ant-bitten to the bone, got the girl. A Hollywood ending. 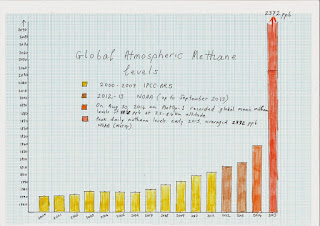