This Revolution Will Be Televised

"History tells us that at key pivot points on the civilizational timeline, humanity’s zeitgeist is highly explosive and a tiny spark can be, well, revolutionary. There was no spark here, only fire-extinguishing foam. We found ourselves watching an extension of Lost." 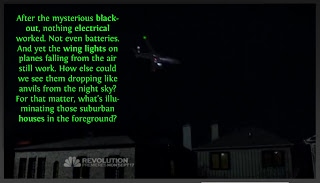 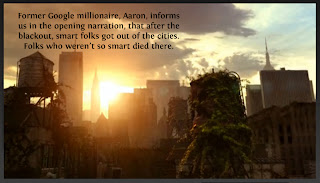 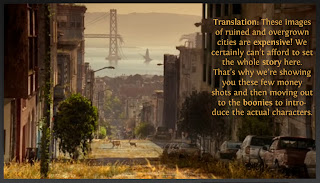 Like many, we had our attention drawn by the promotional advertising for the new NBC series, Revolution, and downloaded the online pilot. Like most (judging from the #Revolution twitterstream every Monday night) we have been disappointed. History tells us that at key pivot points on the civilizational timeline, humanity’s zeitgeist is highly explosive and a tiny spark can be, well, revolutionary.

There was no spark here, only fire-extinguishing foam. We found ourselves watching an extension of Lost, one that even featured Lost actors Elizabeth Mitchell and Mark Pellegrino. 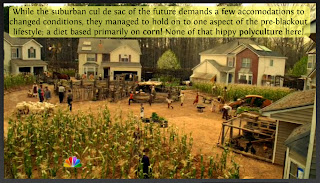 It also had Breaking Bad’s drug kingpin Giancarlo Esposito in a bad guy role far below his abilities, milking it in a desparate audition for better roles than this.

Once there was an ambitious plan to build 1000 nuclear reactors in North America. Then came Three Mile Island. But was it the TMI meltdown or China Syndrome, the Jack Lemmon - Jane Fonda Hollywood film released while “an area the size of Pennsylvania” was being evacuated that did in the nuke? Our betting is on the latter: the power of media and celebrity to redirect a dominant cultural narrative. 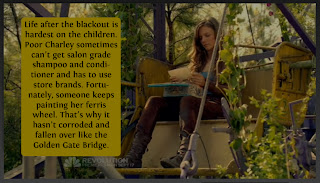 Revolution carried that potential. The brains at Bad Robot and Warner Brothers Television made sure it didn’t come anywhere near. It was filmed on location at the Hard Rock Music Park in Myrtle Beach, SC, written and produced by Eric Kripke, whose previous credits include Boogeyman 1, 2, and 3, Ghostfacers, and 152 episodes of Supernatural for the CW channel. So, instead of some healthy post-petrol collapse advice, we can expect aliens, evil spirits, or shapeshifting demons from the netherworld to appear sooner or later. Maybe Esposito’s Captain Tom Neville is really a reptile.

Folks, the aliens are not coming to save you. Only you can save you. 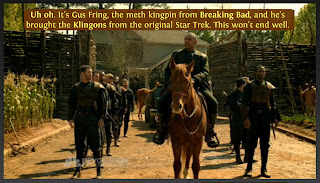 KMO: Before I go, I want to play a clip from the new NBC series, Revolution. It sounds like it might hold some appeal for those interested in Peak Oil, transition, and collapse, right? I suppose it might, if you got good and baked before watching it and just took in the expensive post-collapse images in the first few minutes. 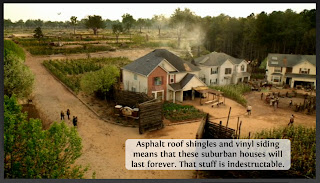 Thereafter, if you've give half an hour's thought to potential collapse modes and their implications, this show will insult your intelligence at every turn.

It premiered on September 17th, the one-year anniversary of the start of Occupy Wall Street, but that seems to be a coincidence, as the show has nothing to do with opposition to unjust political power in the present. Instead, it introduces us to a handful of characters just prior to a global blackout and picks up 15 years later in a world that bears a strong resemblance to Kevin Costner's film adaptation of the David Brin novel, The Postman. 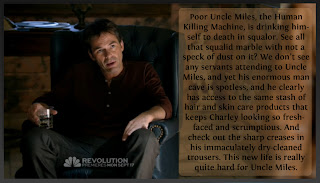 I plan to record a detailed conversation with Arik Roper in which I will detail all of the things that Revolution got wrong, but most of them come down to the fact that people on TV are very, very pretty, and their prettiness exemplifies the advantages we all enjoy due to electricity and being the master of so many mechanical servants. 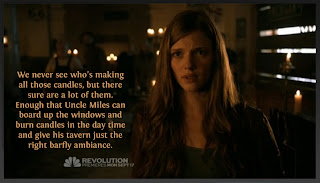 The characters in Revolution obviously all still enjoy hot showers, a full range of cosmetics and body-care products. They all seem to have someone to wash their clothes for them, clean up after them, and allow them to live a life very similiar to the life we enjoy now, just without cars and smart phones. We all live better than emperors of old because we are attended night and day by a gaggle of energy slaves. 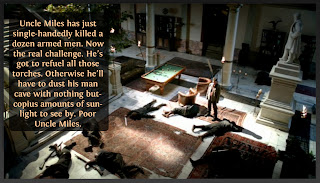 Revolution had the opportunity to depict what life would be like without those energy slaves, but instead, what we get is a depiction of a group of pampered idiots from today having a pretend adventure in a post-petroleum theme park.


The illustrations in this post were captioned by KMO for The Great Change.

Posted by Albert Bates at 12:36 PM No comments:

Bioenergy, TLUDs, and Our 2012 Stove Camp

"Both Solar Bob and Doc agree that trying to get charcoal-burning cultures like Haiti to give up making and burning charcoal is a lost cause, not worth spending much time on. We are less convinced of the hopelessness of conversion, having the card up our sleeve of eCOOLnomics still to play. Pop Culture can marry Mother Earth. We can make it cool to sequester carbon in the soil. "

Here at the Ecovillage Training Center we just completed our first, hopefully annual, Biochar Stove Camp. And a good time was had by all.

These stove camps are the brainchild of Paul “Dr. T-LUD” Anderson,