"The stark choice is between vasectomies and funerals. The sooner we get on with it, the better."

We complain about the slow progress of the climate talks, but what about the even slower progress on efforts to curb semen emissions?

Consider this: each day the population of humans on the planet expands by more than 200,000. That is one good-sized city, complete with water, food, energy, transportation, communication and sanitation infrastructure. To feed that city may require, if storage and process losses are kept to a minimum, 1 million kilocalories every day — something like a 20-acre stockyard of cattle, a Tyson’s poultry farm the size of a superdome, and a large fleet of Japanese fishing vessels seine-netting dolphins as they scour the dwindling ocean stores for tuna.

And the next day, you have to find somewhere to put another, while still feeding the first.

There are not as many people alive now as have ever lived, but it is close. That is one of the features of an exponential curve; the squares keep doubling. Earth's human population today equals the sum of every population doubling of the past 200,000 years.

Imagine UN negotiators agreeing to an excise fee on babies — or a “birth tax,” if you will. Suppose a prospective parent couple could purchase, for a small, but appreciating, price an indulgence that permitted them to have an extra child over and above the allotted number. 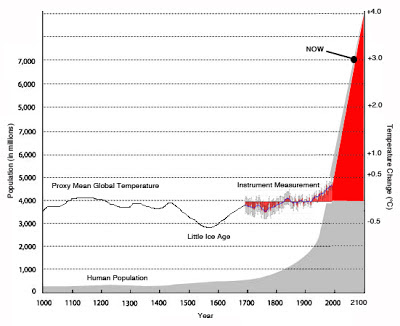 The rules of the exchange might require that privilege be gained at the expense of a fertile would-be-mother somewhere in a poorer, more desperate part of the world, who was willing to sell her quota right for the contract price, less broker fees. The transaction might be recorded on a Chicago Birth Exchange, let us say. It might be further insured, for verification purposes, by surgical removal of the donor’s remaining fertile eggs. Thus the blessed couple would gain another child by picking some “low hanging fruit;” taking some population pressure off poorer countries and shouldering it in a wealthy country, better able to provide.

If we can agree that the “terrestrial parking space” on Earth – the land available for inhabitation — has already been exceeded (a fair assumption given unsustainable depletion rates for most natural resources), we’ll need to set annual birth rations below equilibrium to force a gradual population contraction.

Lets say we want to de-grow global population by 200,000 per day. It would take 70 years just to get back to where we were mid-20th century. Gauging available resources — most importantly a decline in the availability of the high-quality energy that we apply to satisfying food and water demands — we may not have 70 years. We may need to double down and de-grow by, say, 400,000 per day.

We needn’t run all the numbers here, and it would be problematic, but we can just stipulate that a global quota could be set at “X children per fertile female-lifetime,” and that would form the basis for the daily price in contracts negotiated on the Chicago Birth Exchange.

We are a long way from that kind of treaty.

And then, just imagine how it might fare in the US Senate, to say nothing of the Indian Parliament. The alternative, of course, is simply to let nature enforce her own quota, which she usually does by withholding food. Given our other failed negotiation— the Framework Convention on Climate Change — that outcome is in the pipeline. If Peak Oil, GMOs, or the collapsing global economy don’t kill our industrial style of agriculture, killer storms and droughts will.
Working on the angle of changing agriculture from inefficient, energy-intensive, soil-destroying practices to alternative, organic and permacultural methods that use energy-saving human labor and build nutrient density in both soil and crops, we can only get so far. Studies suggest that going organic could boost global food supply a few percent, at best. Permaculturists and eco-agriculturists could redesign many large-field grain mines to rotate through food forests. They could replace concentrated cattle-feeding operations with free-range animals living sustainably within the confines of those rotations. This can support large populations, but not growing ones, and probably not 7 billion; maybe not even half that.

Sustainable agriculture will not involve genetic engineering. That way of hustling funds from governments, donors and shareholders to fund giant labs packed with biotech grad students is a blown meme – stick a fork in it. No genetically modified organism has ever demonstrated superiority to the natural organism it replaced, or solved any problem for which it was designed without creating more serious ones as a side effect. Period. It is a shuck.

So also is classical economics, that tells us demand creates supply, just wait for it. So is the claim that somehow technology can be substituted for cheap energy. Or that markets are neutral arbiters that will always separate grain from chaff. Stick a fork in all that nonsense. 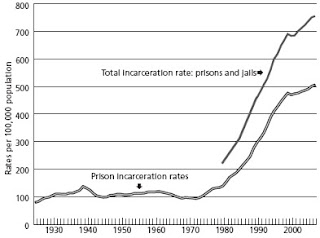 No, the stark choice is between vasectomies and funerals. The sooner we get on with it, the better.

Wouldn’t it be great if the kids taking to the street in Zuchotti Park, Plaza del Sol, or Doha all had their tubes sewn shut or eggs scraped? What if they wore that fact as a proud badge of personal freedom and planetary citizenship? What would that take? Celebrities? Suppose Chris Hedges, Julia Roberts, Julian Assange, Evo Morales, Naomi Klein, Shakira and Brad Pitt marched out of sterilization clinics sporting little blue ribbons.

Blue for that jewel of a planet that supports us, within limits.


This essay was originally published in Culture Change, December 27, 2012

Posted by Albert Bates at 6:29 PM No comments: 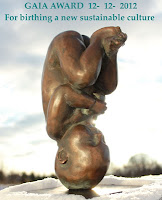