Permaculture Intervention in the Paris Equation

"A rather pale description of some lively moments in the course of these proceedings."


After listening for a week, it finally came our time to speak. Getting to speak at a UN conference is no small feat, and the Paris Climate Conference is especially difficult, because, as one might expect when near term human extinction is on the line, there are many who would like to.

Our process of applying for and eventually being awarded consultative status began 20 years ago. To the credit of the member states, the United Nations has long acknowledged the value of contributions from "civil society;" scientists, farmers, indigenous peoples, youth, labor, and experts of all kinds. In a "multistakeholder" transparent process, UN meetings are shared with "observers," who have greater or lesser degrees of interaction with national delegates depending on a variety of factors.

This year the host country, France, was determined to keep security as tight as possible, even before the recent terror attack in Paris. Credentials for observers were cut, and cut again, so that even very large organizations with many member organizations were limited to just a handful of badges to the main venue. We were fortunate to receive 2 badges per week for our group of about 2 dozen ecovillagers, permaculturists, transition towns people and members of the Sail Transport Network. We were able to have a stand in the "Green Zone" with the Climate Generations exhibits area that was open to the public but were restricted in how many of us could go into the "Blue Zone" — to just 2 per week.

The application process to provide a presentation in the central plenary venue picked up last winter, after the conclusion of COP20 in Lima. When the COP21 deadline closed, the UNFCCC selection committee had squeeze four times as many worthy applications as could be physically accommodated into what could actually be presented, so it asked applicants to partner with at least two other groups making it past the first round of selections. Our group, the Global Ecovillage Network, partnered with Green Korea and Asociacion Protoger and were awarded a slot in a room for 300 people in LeBourget. GEN had three speakers but because of the 2-badge limit, we had to bring GEN President Kosha Joubert in by Skype, and technical issues in providing that unfortunately removed our Q&A time at the end.

Here is how the UN reported our event in the conference daily newsletter: 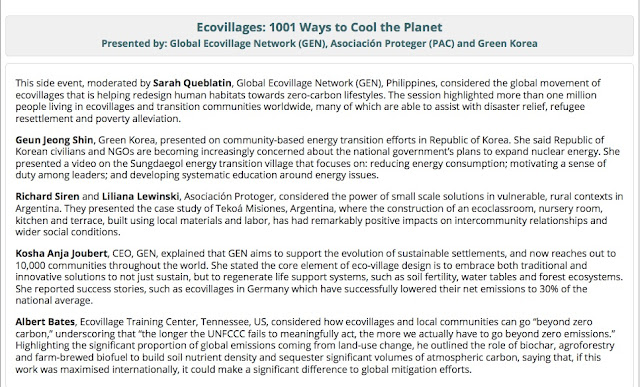 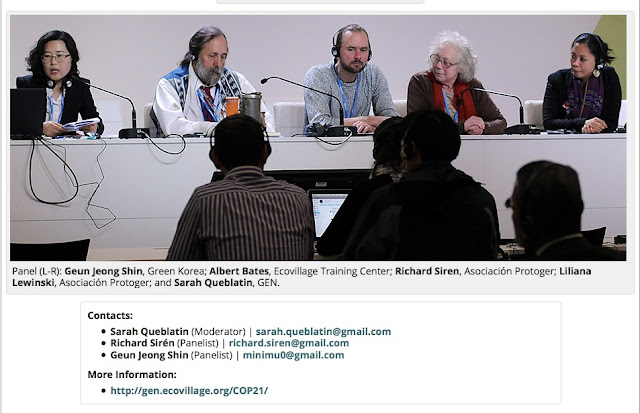 This is, in our humble opinion, a rather pale description of some lively moments in the course of these proceedings. We had come to speak truth to power, and we did. In our next installment, we'll try to recall what we actually presented, along with some of our graphics.

Refugee resettlement looks like a new major mission for eco-villages.

Thank you Albert - for your vision, efforts and presence!

It's amusing to read your work translated into Bureaucratese!