Climate conferences are always held in beautiful locations and Paris is no different. If you tire of the gourmet bistros at LeBourget, all of Paris is just a short train ride away. In the evenings, when the weather has been as mild as it has been here in early December, the Parisian street cafes bustle with night life. If there was a horrible terror attack only a week ago, Parisians seem to have already forgotten. Besides, those casualties are but a small fraction of the number of innocents killed by rogue police in the United States each year, so lets put things in perspective. 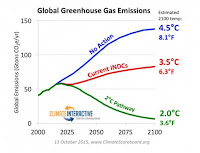 Nonetheless, if you are anywhere in Europe, the refugee crisis will frame your story these days, and the COP21 climate conference is no different. In the US, a clown version of politics seems to lead all news stories, and thus a story about the Senate passing a "binding resolution" pre-rejecting the Paris outcome by repealing the EPA's rules on power plant carbon pollution seems definitive, when in fact, even the average person on the street here will quickly tell you that the Republican bill passed with fewer votes than would be required to override Obama's veto (67) and so it really lost, not won. The EPA rules, and the forthcoming Paris deal, are alive and well. 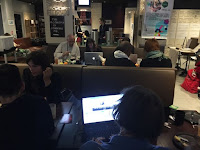 What is emerging as a larger threat to the deal here is the issue of "loss and damage," which bears directly on the refugee issue and has very little to do with politics. Rain falls on the just and unjust. When water comes through your door it doesn't care if you are Republican or Democrat.

Loss and damage refers to the idea that climate change will effect different places more or less severely in any given year and what is needed is kind of a global insurance fund that can accept premiums from the entire world to help distribute the risk. Right now India is experiencing extreme floods and could use some help. 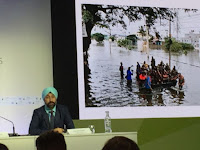 Harjeet Singh, of Action Aid says India finds itself in a difficult trichotomy that makes everything worse. It is the third largest greenhouse gas polluter. Three million people have never had access to electricity but of course would like some, soon. And lastly, it has 7500 km of coastline with massive vulnerability to sea level rise and flooding. On loss and damage, "We need progress by the end of the day today," Singh said. 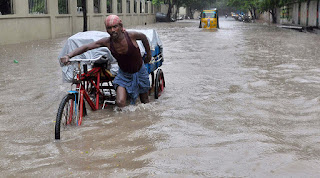 Any insurance mechanism would also need to deal with "permanent loss," not just temporary catastrophes. Most of those refugees that are invading Europe from Africa and the Middle East are not temporary dislocations but permanent ones. Some left home for safety, and hope one day to return, but many, perhaps most in the future, will be leaving because entire regions become uninhabitable. It is easy to list the kinds of permanent damage we can expect as temperatures rise and storms grow worse: loss of coastline, flooded plains, dried lakes, eroded slopes, rivers deprived of glacial meltwater, formerly fertile areas devoid of productivity.

When the US threw down the glove and openly challenged the G77 on this, President Obama pointedly said they could not accept "unlimited liability." Moreover, one should bear in mind that Obama would need to ask Congress for funds — the US Constitution is quite clear who has the power of the purse — and if the US were made to pay a higher premium than others, whether for historical reasons or otherwise, that would be a non-starter for funding insurance premiums. 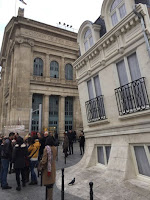 Still, after his session with India, Obama had a meeting with the Marshall Islands, representing the Alliance of Small Island States (AOSIS), 39 countries with the greatest sea level vulnerability, and smoothed the waters. "I am an Island boy," he told them. They laid out a very strong case for loss and damage and he promised them the US would be willing to listen. Negotiating detail shifts back to Secretary Kerry and team who now soldier on after Air Force One lifted off from Orly.

The drafters of the final document (in UNese, "ADP spin-off groups") are trying to find the least offensive, least contentious wording to slide over differences or defer hard choices. They are backloading ambition to 2020 and beyond. That carries a big risk because by not anchoring loss and damage in the Paris deal, it may mean the whole insurance mechanism will never be enough to cover losses, at premiums anyone can afford. 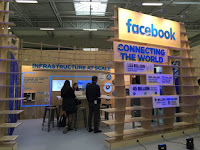 Which causes us to lean forward for a tiny moment and stare into the abyss, before recoiling back and regaining our digestion. When the "loss" we are speaking of is of considerable larger magnitude than the shift of climate from any past ice ages to the present; when the scope of biodiversity loss, marine despoilation (hot, sour and barren) and desertification are beyond any historical precedent; can we have any serious doubt that millions more will migrate?

Will it not become, as Lovelock predicted, huddled masses around the poles, hoping to survive? What insurance plan can pay for that?