The New Division of Subsistence Homesteads

Yesterday one of the talking heads on the financial crisis opined that the recession is now inevitable, and it will not be as brief as previous ones, but “could continue for a few years.” That is an understatement. If there is a silver lining to the crisis, it is that it will delay peak oil’s drop trajectory by a few years. But make no mistake; this is the start of what James Howard Kunstler has dubbed The Long Emergency.

This past Monday, Mr. Kunstler, who generates metaphors faster than a tennis practice machine pumps balls, came up with a humdinger. He said the financial crisis is hitting us the way a tsunami does. “The current disappearance of wealth in the form of debts repudiated, bets welshed on, contracts cancelled, and Lehman Brothers-style sob stories played out is like the withdrawal of the sea.” But in his rapid-fire metaphorization, there is an opportunity missed. Yes, the October Surprise financial crisis is the withdrawal of the sea, but the coming wave is not monetary inflation, as Kunstler would have it, but Peak Oil. Whether we get inflation, deflation, or both, what is coming is a tidal wave that will wash a long distance inshore, leaving nothing we would recognize as today’s city life in its wake. 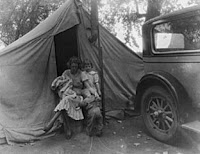 Separately and simultaneously, Richard Heinberg compares the crisis to the Great Depression, and says that the government’s response should be informed by what worked then. Heinberg proposes a “New Green Deal.” Instead of propping up failing financial institutions, the new president must inject investment into the real economy by supporting wide-ranging but tightly coordinated projects to create far more renewable energy generation capacity, build railroads and public transport facilities, insulate millions of homes while providing alternative heat sources, and re-configure the national food system to dramatically reduce and soon eliminate the need for fossil fuels.

I’ll take that a step farther and remind readers that Franklin Roosevelt was also a little slow to adjust to what was required in the way of social programs, but, led by his wife, Eleanor, eventually did the right thing. In 1943 Eleanor Roosevelt started the Victory Garden movement and, by 1945, 20 million home gardens were supplying 40 percent of the produce consumed in this country. She did it over the strenuous objections of the Department of Agriculture.

The Department of Agriculture also opposed organic gardening for decades, until the oil crises of the 1970s, when, after its own scientists showed how competitive it could be and how it could get the US off imported oil, it became an advocate, sort of. The Reagan Revolution ended that. The Republicans killed it with a total purge of the Department and buried the evidence. USDA was even forbidden to use the word “organic” and had to come up with “Sustainable Agriculture” as a euphemism. 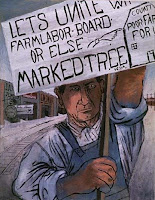 Today, in New York and Boston, there are allotment gardens for people without access to land. Those in New York City were started by Brad Will when he was working for the Sixth Street Community Center, before he went off to die in Oaxaca. As Michael Pollen observed recently, Victory Gardens offer a way to enlist Americans, in body as well as mind, in the work of feeding themselves and changing the food system — something more ennobling than merely asking people to shop green.

Another New Deal program that seems lost to history but could be revived is the Resettlement Administration, a U.S. federal agency that, between April 1935 and December 1936, relocated struggling urban and rural families to communities planned and built by the federal government.

The Resettlement Administration was originally under the United States Department of Agriculture as the Division of Subsistence Homesteads. It was folded into the Farm Security Administration from 1937 until 1942.

The Resettlement Administration worked with nearly 200 communities, each of several hundred homes, to help residents escape poverty; show that cooperative management can work, and as an experiment in cooperative ownership of the village, including the businesses, which experimented with microlending, peer management review, and other innovative practices. It was killed by the Republicans during the McCarthy witch hunt.

The intentional communities movement in the US began mostly after WWII by pacifists and war resisters who picked up where the Resettlement Administration left off. Today there are several hundred thriving intentional communities in the USA and many more in other parts of the world. From intentional communities sprang ecovillages, a movement that has more than a million residents worldwide today. These were the fruit of that brief experimental period of the 1930s, the sketchpad for the route to higher ground as the tsunami approaches.
Posted by Albert Bates at 8:25 AM