"For those who claim a deal in Copenhagen is impossible, they are simply wrong,"


Day Four. The Lord Mayor of Copenhagen warned hotels that prostitutes soliciting UN delegates would not be tolerated. In response, the Sex Workers Interest Group (SIO) announced that anyone showing a UN credential would receive free sex. The line at the Bella Center for credentials extended to two hours.

Climate joke: Man walks into a bar. “I thought I was going to cheat on my wife, but at the last moment I decided not to. I will now sell someone the opportunity to cheat on your wife. What am I bid?”

The UN Environmental Program released a report compiled by British economist Lord Nicholas Stern and the Grantham Research Institute. "For those who claim a deal in Copenhagen is impossible, they are simply wrong," said UNEP director Achim Steiner. The UNEP report tallyed recent pledges from the US, India, China and other rapidly developing countries, many of which assumed rich-country funding to help continued economic growth.

Doing the numbers, emissions today are about 47 billion tons CO2e. Going by IPCC-4, the UN target requires that to avoid unacceptable consequences (>2°C) all countries together should emit no more than 44 billion tons of carbon dioxide by 2020. Computing the high end of all commitments publicly announced so far, UNEP said pledged emissions will total some 46 billion tons annually in 2020.

"We are within a few gigatons of having a deal," Steiner said. "The gap has narrowed significantly." Speculation here is that this slimming of the odds for a favorable outcome were what prompted Obama to switch his dates here from December 8, en route to Oslo, to December 18, the final day of the conference (rather than blogging by George Monbiot and others). While Obama has not confirmed a visit, if he comes at the end, it could be very helpful. Perhaps he can even get in on the free sex deals at the hotel the Secret Service has reserved.

Today we had a lively chat on the way into town. Feargas Duff, formerly of the UNEP office in Nairobi and now of the Ireland delegation, and who is quite pragmatic, got into it with Rolf Jackson, who feels that we need a paradigm shift and its all about making spiritual choices. “You’re not admitting that this whole global economic model is not working and its all going to collapse soon anyway,” Feargas said.


“There is an important historical parallel in World War II,” Rolf said. On the 1st of January in 1942, Churchill and Roosevelt and the Canadian P.M. met on a ship in Newfoundland Bay and they signed a treaty, it was very brief.

It said, this is about the freedom of humanity. We agree to put all our economic and political resources to one aim. It is to defeat the Germans and there will be no separate peace. Nobody makes a separate peace with Hitler, this war has to be fought to the end. And I would say that was the day that the war was won. Because on that day it was not 80 million Germans against 60 million British, it was 800 million people from all over the world against the Germans. They did not have a chance from that point.

“Now it is that kind of decision on principle that we need to organize. We need world sacrifice like that. And that will only happen if it is based on fundamental principles. Nothing else can inspire the kind of sacrifice that is required.”

At the Bottoms Up meeting they are having a daily funeral. On Saturday we buried Egoism. On Sunday we buried The American Dream. Today we buried Global Free Trade. Tomorrow we bury Economic Growth.

At the Bella Center the NGOs were setting up their booths are we got to see some really first rate exhibits. There were not many meeting rooms. There were rooms set aside for Farmers, Women and Gender, YOUNGO, BINGO, ENGO, IPO, LGMA, RINGO, and TUNGO, but they were about the size of a Finnish sauna, not really meeting rooms.

What was it Lennie Bruce said? “The only justice in the Halls of Justice is in the halls.” Disenfranchised non-profits were having circles on the floors in the hallways.

We were especially impressed with the China Youth Group. They have planted one million trees. Go kids!

We went to the reception at the City Center where they were serving local appetizers and organic fruit juice — the UN has pledged to have 65% of all the food and beverages served be organic and fair trade. It was interesting to see the organic apple juice packaged in a wax paper carton with an image of a stoppered glass bottle. Where does reality leave off and image begin? 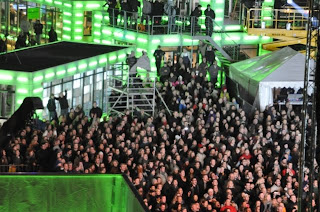 Outside the reception was a rock band playing for a virtual concert — it was being simulcast to other sites around the world, attendance at which sites were displayed like the spot on Jupiter on a giant globe, along with various provocative tweet questions, like "Will some parrot species survive Danish winters by 2050?" (No: 28%. Yes: 72%.) It was all being controlled from a small glass sound booth surrounded by flaming torches — more carbon porn. Nice to have a place where everyone could attend for free with no security badges, x-rays, and the Christmas lights of Tivoli in the background. A lovely end to a long day. 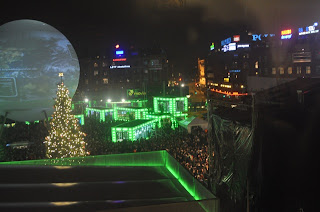 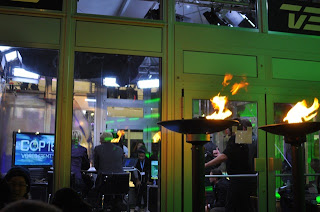 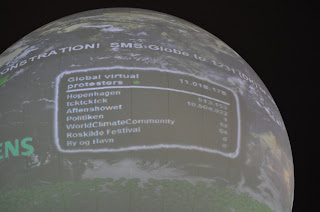 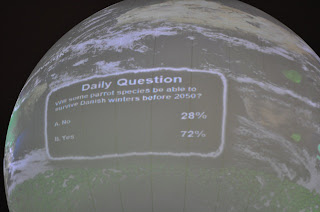 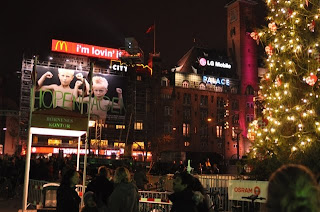