"Seawater is the circulatory system of Gaia"


“I lean and loafe at my ease observing a spear of summer grass.
My tongue, every atom of my blood, form'd from this soil, this air,
Born here of parents born here from parents the same, and their parents the same….”

Later in Leaves of Grass, he extols the miraculous process by which the Earth is cleansed as we each return to her some day. But in those opening stanzas, he omitted mention of the sea, which, before there was even land, had written the recipe for our blood.
Our blood is saline like the sea for good reason. Andrew Schafer, past president of the American Society of Hematology, explains,

Blood can also be thought of as a private ocean, a recapitulation of what life was like for all the years we spent drifting as microscopic, single-celled organisms, taking up nutrients from sea water and then eliminating waste products back into sea water. Not only is blood mostly water, but the watery portion of blood, the plasma, has a concentration of salt and other ions that is remarkably similar to sea water.

Seawater is the circulatory system of Gaia. When Earth gets a fever, her blood runs hot and she responds by perspiring (casting off more heat to space and making more rain), taking deep breaths (more trees and fiercer winds), and drinking more water (melting ice, floods, and super typhoons).

There is a certain irony in that throughout the Caribbean and in parts of Southeast Asia, beaches are being fouled by massive tides of seaweed. The irony is that until very recently a branch of the scientific community had been advocating a form of geoengineering that would have seeded the ocean with iron in order to produce large plankton blooms, thereby withdrawing significant amounts of carbon dioxide and replacing it with oxygen. Mother Nature already had that, in the form of seaweed and algae, and according to the geoengineers, all she needed was a bit more fertilizer to really scale up.

Enter Brazilian President Jair Bolsonaro and a CIA-style right-wing coup, cleverly directed by AI bots engineered by David Koch and Steve Bannon, with the naive assistance of Facebook founder Mark Zuckerberg. They dumped the deeply unpopular President Michel Temer whose job it had been to cast lefty-green President Luiz Inácio Lula da Silva into prison on fraudulent charges and squash Brazil’s labor movement. Bolsonaro is now delivering on his side of the bargain with the devilishly dystopian Cambridge Analytica and Americans for Prosperity by gifting them a tree-free Amazon Basin with the assistance of the cattle ranchers and miners that comprise the Bolsonaro popular base. And as it burns, extinguishing uncontacted native peoples and uncharted biodiversity along the way, the forest gives up its topsoil to the river, that silt nourishes the sargassum blooms at the river’s mouth, and those blooms now extend across the seas in previously unimaginable volume. It is the geoengineers’ wet dream.

Last month, one plume of that Brazillian sargassum 550 kilometers long — an island of seaweed about the size of Jamaica — began washing ashore at Tulum, in the Mayan Riviera, causing not just a stink and an eyesore that drove away tourists but damaging turtle nesting grounds, coral reefs, and marine ecosystems. Turquoise bays turned to rust. 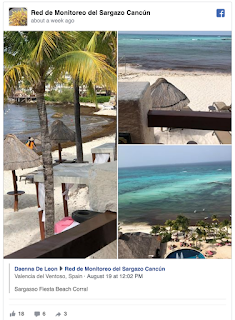 Andrés Manuel López Obrador, Mexico’s new president, called out the marines to trap it offshore or rake it from the beaches. All told, the government threw $2.7 million at that effort, with at least an equal amount contributed by hotels, and still tourism plummeted by 15%. Tourism is nearly 9 percent of the country’s GDP and half of that comes from the Mayan Riviera.

The amounts of sargassum in Puerto Morelos on the beaches grow exponentially. In September 2015, researchers from the Institute of Marine Sciences and Limnology (ICML) accounted for 2,500 cubic meters of sargassum per kilometer of beach, a figure that in 2018 increased to 275,000 cubic meters in six kilometers of beach.–Mexicanist

That 550 km plume? Just a taste of what is coming. A Dutch research vessel has been accompanying an 8000 km island that regurgitated from the mouth of the Amazon in July and could reach Tulum this winter. That plume contains 20 million metric tons of sargassum and it is still expanding in the warming waters of the Caribbean. The most sargassum removed from the Mayan Riviera in one year, 2018, was less than 1 million tons. Can the marines hope to remove 20 times that? And if they can’t, what becomes of Mexico’s $23 billion tourism industry? 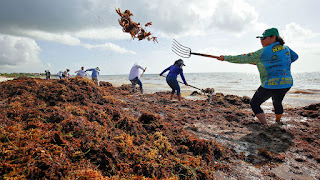 Biochar to the Rescue


Here is where questions of right and wrong start to get fuzzy. As environmental activists, we all struggle with ethical dilemmas. Is it right to solve hunger or energy challenges if, by doing so, you spur human population to new heights, with all the ecological consequences that result portends for other species and eventually our own?

Is it right to view seaweed as manna from heaven, if by pyrolyzing it at a profit we save a tourism industry that lives and breathes by cruise ships and international air travel, jetting us toward climate Armageddon?

I have come to think it is likely to do more good than harm to close the deforestation-to-seaweed cycle by reforming that decaying biomass in Mexico, the Dominican Republic, Thailand, and Seychelles that, left alone, would waft vast new quantities of methane and carbon dioxide skyward. As an Emergency Planetary Technician, I am attempting to stabilize the patient in situ. We can worry about their insurance later.

By enlisting the financial clout of the hotel owners, tour operators, and governments, reversing climate change becomes just a little more possible. If we can transform that stinking red tide into terra preta’d forests, water filters, or new coral reefs, we can store megatons of carbon for thousands of years. That would be something. Might even be as big as, say, replanting the Amazon rainforest (which is not to say we shouldn’t do that, too, and while we are at it, replace the Ohio Valley and Californian forests before we criticize Brazil). 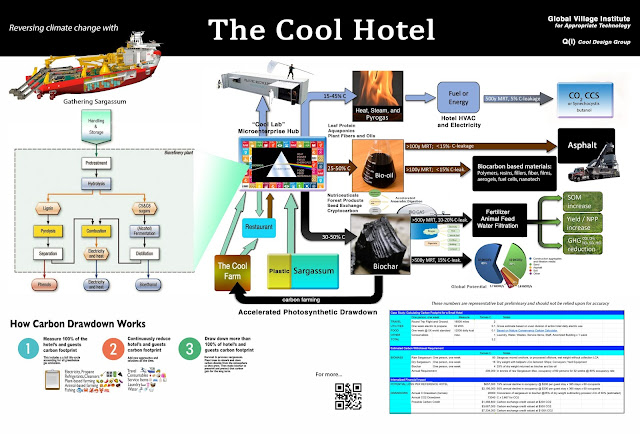 In Leaves of Grass, Whitman frets about our inventions, social rituals, fashions, compassion for others, our unjust money system. He says grass just keeps on going, unworried, while people do not have that luxury. People just have to carry on and create and work and feel productive, and do the things they are accustomed to doing, despite challenges; “…the book-keeper counts at his desk, the shoemaker waxes his thread,…” But we also need a survival plan, like Gaia and her sargassum. Maybe the sea is tossing us a lifeline. We are her blood, after all.

Such is the world we have made. If only people would listen to you, we might have a chance.