"From here this presidency sure looks like an unqualified success." 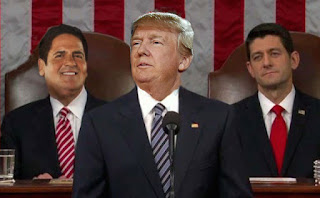 It has been more than a year now since The Donald moved into 1600 Pennsylvania Avenue and he continues to be thwarted at every turn by that do-nothing Congress and the Democrat Party.

We all had expected that by now the Asian countries that have dumped their goods here and almost bankrupted our country by causing our trade deficit would have felt the bite of tough new rules, but the Trans Pacific Partnership tied Donald's hands on that one.

Mexico still won’t keep its illegals — the source for Americans’ drugs — on their side of the border. NAFTA prevented the border closing there. It wouldn't even take those Mexican tractor-trailers off our roads, and who knows how many of them are filled with illegals being dropped off in Ohio and Pennsylvania? Still, we are pouring concrete for a bigger wall all the time, whether Mexico pays for it or not. They should because they created this problem, but so far Donald has not gotten a single peso from the ingrates.

And, of course, the Muslims have always been fighting us when they are not too busy squirmishing between themselves. The Donald's executive order closed all our borders to refugees from Syria, Libya, Egypt, and Afghanistan; countries populated by still more ingrates who are unwilling to pay for the wars that we started on their behalf. And wouldn't you know? That is now going to the Supreme Court, challenged by the Democrat Party as unconstitutional. As if the President of the United States, as Commander in Chief, doesn't have the power to keep all the riffraff out. That wishy washy Supreme Court is not conservative enough! The Donald will get his chance to change that, soon, with real right-winging, bitter-clinging, proud clingers of our guns, our God, and our religion, and our Constitution.

Solving our trade deficit wasn't as simple as ending the supply of cheap Chinese stuff. Donald got around Congress and the TPP by calling that retailer CEO summit at the White House. But it still comes in from places protected by those bad trade deals negotiated by idiot presidents who didn't know the first thing about the art of the deal. Now the Chinese stuff goes to Australia and gets rebranded before the container ships take it to WalMart. That is why the prices we pay didn't change much, so I guess we can be grateful. The Chinese and Koreans should be too, but are they? No way.

When the Donald sent the marines to grab Iraq’s oilfields last month there was a big uproar at the UN but what could they do, the toothless liberals? Donald just vetoed any Security Council resolution they passed. Now we control a significant supply of the world’s oil and can set prices where we like, and not just where the Saudis want them, in the basement. We all have to put up with higher prices at the pump now, but rising crude prices have stopped the slump in fracked gas futures and got us back on the path to the energy independence that made America strong.

If the Saudis gripe about that, Donald says he is ready to send a bunch of oil sheiks to his reopened Guantanamo just to let them know who's in charge. Sure, he hasn't gotten rid of ISIS yet, but give him time. He will get their oil too, and you can take that to the bank. The marines are just settling into Iraq now. Syria is a quick hop.

Donald's poll numbers are quite good, and it is long past the honeymoon stage. People are calling him the Second Great Communicator. Doubters have to eat crow. Our military is stronger than ever, and we are respected again, whether foreigners like it or not. 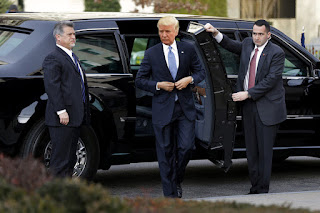 We will know soon whether that do-nothing Congress passes the President's energy plan and American builders can get started on those 100 new nuclear plants. That will be a real shot in the arm for the economy, as well as making energy cheap again. People say the President is a climate denier, but those new nukes will do more to stop climate change than anything Obama did in Paris. Put a trillion dollars into nuclear power, like we will, and your other countries can be energy independent too, you UN people.

People criticize the President for ordering the National Football League to move the Super Bowl to New Jersey, but now that more than a third of the teams have relocated to California, it seems only reasonable that the East Coast should get its share of the action. Some of the best football we've ever seen was played in snow.

When the Donald took office the economy was in shambles. Stocks were getting schlonged. Oil, coal, and car companies were talking bankruptcy and wanting bailouts. The Donald doesn't do bailouts. How about that?

The Donald met with all the banks and cut them checks. He refinanced the country. Remember: this is a guy who knows what it is to go bankrupt and still wind up with high-rise penthouses and golf courses. That's exactly what he did for America. Who cares what the dollar is now worth in Timbuktu? We will soon have legal casinos in every city and every state, and they won't be run by Indians, either.

We are still only a year into this presidency, but from here it sure looks like an unqualified success. We guess that's only to be expected when you buy the best.