" This is why I turn white with foam and why they named me 'Blanco.' "

“The main challenge to rational planning for flood risk in the country is that private property rights trump even modest limitations on floodplain development,” said Nicholas Pinter, an expert on floods, people and politics at Southern Illinois University, in an email today. “And that sentiment runs deep in Texas. The result is unchecked construction on flood-prone land, up to the present day and in some places even accelerating.”

It’s worth noting that a similar pattern, although with a different mix of drivers, can be seen far from the strip malls and condos around Austin. In some of the world’s poorest places, rapid population growth and flimsy housing in zones of profound “natural” hazard have created huge vulnerability (the latest case in point is, of course, Nepal). 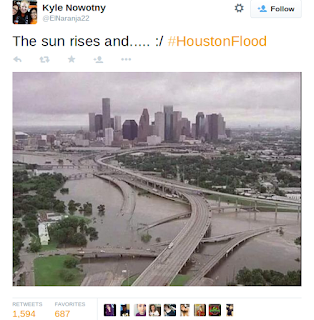 In many parts of the world, watersheds like me are underappreciated and overlooked. Not me.

Maybe it is because I am in a high, dry country, long the home to roving horse nomads and then to hardscrabble ranchers. Every cottonwood grove along my banks is sacred to those people, because they are rooted in the Earth, and when the rains come they know to be thankful, and to keep a respectful distance from my banks.

In good years, I bubble out in winter from a series of springs in northern Kendall County and flow generally eastward for 87 miles between rolling hills and canyons. My bed is quite shallow, and it briefly dips below ground in some areas of the Hill Country, like a Ninja practicing the secret of invisibility. 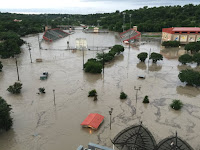 At other turns I pass through the steep cliff walls that I have carved out of hard rock over eons, to remind you of my hidden power. When my temper is aroused, I have 1000 times more strength (3000 m3/s versus 3 m3/s). This is when I turn white with foam and why they named me, those wise Tejano Texians, "Blanco."

When I stood up last week, I raised myself 30 feet in less than 3 hours, blowing away the puny depth gauges marking my passage through the Balcones Escarpment. 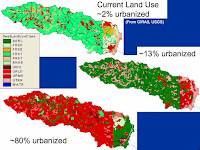 About halfway between Austin and San Antonio, near San Marcos, I take a southerly turn. About two miles west of Gonzales I join my sister Guadalupe and the two of us gather in our brother Antonio before reaching our delta and estuary at Guadalupe Bay.

If you have seen the pictures coming out of San Marcos, Austin, Houston and the other central Texas towns this past week, you might wonder why we are all this angry; why we are all Blancos.

Some think it has to do with climate change, and there is an element of truth in that, but you need to look a little more closely. Texas ranchers and those mad fools in the oil patch have wrecked the climate for a good long while, but what has got me mad now is sprawl.

In one county I run through, Hays, the population grew 61% between 2000 and 2010 and shows no signs of slowing. Those humans are doubling in numbers every couple decades. All those people assume there will be water enough for their yards and gardens even in dry years, but they are paving over the recharge zones of my springs. I know one shopping center that paved over 40 acres that once absorbed runoff for me and what did they do with that land? They parked cars on it!


So, people, if you really want to enjoy my gentle nature, and raft or kayak on me, or water your crops and herd your cattle, you had better stop what you are doing to my watershed. For heaven's sake, control yourselves. There are limits, you know.

I spent most of my youth in Fort Worth, and Revkin's piece made me laugh out loud. He is exactly right. The current species of Texan, brainwashed by 40 years of right-wing yammering, will never accept any kind of "limits" on their "freedoms". That everyone, everywhere, should be able to do whatever they want, as much as they want, is a basic assumption reflected in every oversized house and pickup truck. I escaped twenty years ago, but my parents still live there. Every time I go back it's more of the same. And it's too bad, really--just more poor people having been convinced destroying their future is wise.

There are some rivers in Texas that are just so damn beautiful that they draw people there to live and play in the cold clear water, under the shade of the old growth cypresses. It's what brought me to this country thirty years ago, so I understand the motivation.

I think we can definitely blame the loss of life from this recent flood on increased human habitation along the Blanco and its tributaries, but to blame the flood on increased impervious cover is probably an error. Impervious cover is a huge problem, but it has far more to do with the creeks and rivers drying up than it does with this kind of flood, imho. When the Blanco flooded 33 feet in 1929, there was essentially NO man-made impervious cover in the flood plain. Not sure what the experts blamed that one on, or if there were any experts.

I think the take-away here is this: With ever-widening swings in climate change induced weather events, historic concepts like "100 Year Flood Plain" are to be taken with more than a grain of salt. On my place, eighty miles to the north, on a tributary of the North San Gabriel, I wouldn't build anything new without considering the possibility of epic flooding, even though this last round of heavy rain barely got my creek out of its banks.

I feel for the folks affected by this tragedy, and I particularly mourn the loss of the hundreds, maybe thousands, of big trees that we lost. I don't think we'll be getting those back.

Eddie, consider that 1929 was a watershed year for the American economy as well as for the climate in this country. Watch the eye-opening documentary Ken Burns and his crew put together about the Dust Bowl years and the unbridled expansion of prairie plowing during the first decades of the twentieth century that brought on the disastrous droughts of the 1930s. Unbridled human overpopulation, human industry and agricultural expansion always brings on disasters, and has in fact brought on droughts like the Dust Bowl since the days of Joseph in ancient Egypt, when growing populations of people in urban areas demanded more grain production. The sustainable solution will be more food from perennial crops, less from annuals. These can include more tree nuts, like pecans, which would enjoy life along the river banks in Texas. Perennial grains, like the wheat under development in Kansas by Wes Jackson and others at the Land Institute could be another solution. Perennial pasture land covered with native grasses and legumes has always been a mainstay in Texas, or at least since the days of the Plains Indians and the bison they hunted. A sustainable climate will require a sustainable agriculture that covers and protects the permeable earth with humus, building fertile, healthy, living soil, which will in turn require a return of more people scattered across the land to tend it well.