"Excursions from the comfort of the normal to the uncertainty of the new typically happen brutally and violently."

We read recently in a Southern California newspaper that climate change may wreck the shape and direction of waves that make for some of the world's best surfing beaches. We wondered if it might have a similar effect on Kondratiev cycles.

Our species now has to focus on three overarching tasks:

Among collapsologists, the surfing analogy works at several levels. Instead of passively observing tsunami-size Kondratiev and Elliott waves pound civilization to rubble, we can get out and ride those waves. We are not destroying anything to have our fun. Its renewable energy. We are degrowing our footprint, which is growing hope in inverse proportion. Surfing hits our dopamine receptors. With newfound friends, in ecovillages and organic farming collectives, this big wave surfing can be a lot of fun.

"Surfing is a very experiential or 'now' activity," a surfer recently told the San Jose Mercury News.  "When waves die in one spot and pick up in another, you move to that spot." This is the phenomenon Kevin Kelly described as "scenius," observing that throughout history certain geographical areas attract creative human energies, often passing into and out of their heyday with unexpected suddenness. As Benoit Mandelbrot says, "Wave prediction is a very uncertain business."

Most demographic moves of populations around the planet are reactive. Typically people are fleeing political, social and environmental crises, not rushing somewhere to find a nexus of like-minded individuals. Witness the nomadic invasion of Europe. Many of these waves of refugees reflect, in the mirror, a desperate and very brutal grab of Western countries for control of dwindling oil. Tent cities of refugees extend from Jordan across to North Africa. As they seep into the old stone cities of Europe, they raise their tents under bridges or bargain with farmers to camp in exchange for work. Soon enough, climate refugees will follow. They will be looking for places to escape the heat.

Excursions from the comfort of the normal to the uncertainty of the new typically happen brutally and violently. A rare event  invasion, terror bombing, freak storm – forces a lurch for equilibrium.

In these movements there is an asymmetrical agency issue, which is the problem that those who make decisions bringing about such horrendous consequences suffer disproportionately less because they have insulated themselves from the downside. Think of how well endowed a Senator's health care plan is in comparison to the average citizen's. There is also the issue of asymmetrical informational opacity, in which not only the decisions themselves and how they are made, but the qualitative value of the information predicating them is kept secret from outside scrutiny. 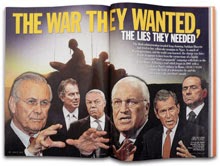 Take for example the book tour of discredited New York Times reporter Judith Miller. Miller, we may recall, was Dick Cheney's handmaiden for stovepiped and fabricated intel on Iraqi WMD,  and her planted NYT stories went on to be cited by Cheney, Rumsfeld, Rice, and Dubya as proof that the rape of Iraq was justified to prevent more 9-11s "in the shape of a mushroom cloud." Interviewers with the attention span of an Alzheimer's patient now toss softballs at Miller, letting her rewrite history to her advantage, in much the same way Cheney, Rumsfeld, Rice, and Dubya are given a pass on the Middle East and thus Jeb Bush is taken seriously as a presidential candidate for 2016. This is asymmetrical informational opacity.

For those causing the problems there are no consequences. There is only a large upside for them and the greater downside is confined to distant and powerless victims. The same can be applied to the average US citizen, who bears ultimate responsibility for silently assenting to the outrage in unleashing high-tech weaponry on pastoral societies like Vietnam, Grenada, Afghanistan or Yemen for the sake of cheap fuel for their Hummers and retirement communities with golf courses. Many USAnians, goaded by asymmetrical and captive information diets, are more than willing to wreak havoc on a third of the world, mindless of consequences.

Of course there are no consequence-free zones, ultimately. Refugees are only the first wave of consequence for Fortress America. Asymmetrical warfare, as the pentagon has so aptly called it, invariably returns from the powerless to be directed at the would-be insulated. Wield asymmetric technologies at your peril.

In the near term, when large, national or transnational companies abuse, everybody except the culprit ends up paying the cost. Between 2000 and 2010, the US stock market lost two trillion dollars for investors but made scores of new billionaires among the top fund managers. Or take nuclear energy (please!), whereby the bulk of the costs – cancers, expensive cleanups, diverted weaponry  are foisted off on future generations while the current generation of electric ratepayers enjoys all the benefits of "cheap" electricity.

But this asymmetry is a function of scale. Opacity is seldom possible at local scale, and feedback is quick. In a less isolated system, such as a city mayor's office, abuse by authority is more likely to be kept in check by the proximity of the victims and the likelihood their voices will be heard when the next election rolls around. A small retailer who sells a product that harms one of his customers is likely to destroy his business. Retribution is quick.

Degrowing industrial dependencies and shedding profligate ways in our resource-constrained new world returns the scale of practical work from global to local and cuts straight through opacity and insularity.

Surfing is not a team sport requiring large stadiums. It is performed by semi-autonomous actors observing the patterns of nature and blending with them. Done well, it accomplishes nothing, and a great deal.

Switching to "renewables" is more of the same.
All the human-made things in our world have an industrial history. Behind the computer, the T-shirt, the vacuum cleaner is an industrial infrastructure fired by energy (fossil fuels mainly). Each component of our car or refrigerator has an industrial history. Mainly unseen and out of mind, this global industrial infrastructure touches every aspect of our lives. It pervades our daily living from the articles it produces, to its effect on the economy and employment, as well as its effects on the environment.
Solar energy collecting devices also have an industrial history. It is important to understand the industrial infrastructure and the environmental results for the components of the solar energy collecting devices so we don’t designate them with false labels such as green, renewable or sustainable.
This is an essay challenging ‘business as usual’. If we teach people that these solar devices are the future of energy without teaching the whole system, we mislead, misinform and create false hopes and beliefs.
I have provided both charts and videos for the solar cells, modules, aluminum from ore, aluminum from recycling, aluminum extrusion, inverters, batteries and copper.
Please note each piece of machinery you see in each of the videos has its own
industrial interconnection and history.
http://sunweber.blogspot.com/2015/04/solar-devices-industrial-infrastructure.html

I tried. I did research that indicated renewables were extensions of the fossil fuel supply system and the global industrial infrastructure. The research was on my blog. I earn no money for my blog or my research. I am not a supporter or being paid by nuclear or any fossil fuels. I am only wanting to challenge business as usual. That you were not willing to post my comment saddens me but does not surprise. Good luck and good bye. http://sunweber.blogspot.com/2012/03/my-biography.html http://sunweber.blogspot.com/2015/04/solar-devices-industrial-infrastructure.html

The site is moderated because of spam. Moderation is not real time because we are across the digital divide, but all comments will be reviewed with 7 days, usually. If they are not spam or otherwise abusive, they will be published.

Mr Weber makes a good point,but,it doesn't mean we need to drop our drawers and get a digging stick. One of the principles I am learning in sustainability is that you use unsustainable methods to achieve sustainability. I shred my limbs and various cutting to mulch thereby saving water, improving my plants and soil and, hopefully, improving the environment I have control over. So my use of fossil fuels, as in gas, will diminish over time. And the improvement on my property and the inspiration it gives my neighbors who observe this transformation is worth the price. Going to a less/no energy intensive future will not be easy but it needs to happen.

Man, we won't be surfing much earlier than the end of the century when there is no more gasoline for the surftrips. , no more foams from petrol or fins, wetsuits, and leashes made in china. I'm a surfer and I have a conflict if I should move somewhere where I can Permaculture and surf, surf is the thing I like the most, but I'm afraid is not going to be very doable post collapse, I even learned to shape a wooden surfboard called alaia, like the native hawaians.