Master of his Trade

"Watching the young man work is better than any ballet. "
The man they call “Bananas” is about 20 years old, 5 foot four — a stocky Mayan with a distinctively Roman nose and short black hair done in a greased-up crew cut style. He wears a non-descript blue T-shirt and shorts and flip-flops. His workshop is behind a typical 10-foot by 10-foot palapa of palm poles and rusted tin roof over a dirt floor. It has no sign. People know him by reputation. His backyard is bare dirt with a few coconut trees and further back, beyond the fishing net fence, is a mangrove swamp. The yard is cluttered, as any shop would be, with a detritus of discarded parts, rusty tools, cans of used oil and gas, and an air compressor. Around the perimeter are an assortment of parts for both for bicycles and motorcycles, which he has been repairing to keep busy, although bicycles are his first love. 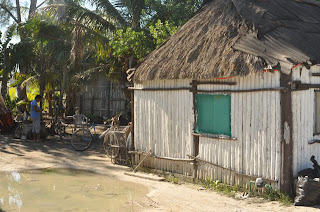 When I come around the house into the yard there already two fishermen waiting for him to work on their motorscooter and tricycle carrier cart, respectively. Both of those jobs will take more elaborate work than my bicycle, so when I come in, pointing to my deflated front tire, I am bumped immediately to the front of the line. “Aire?” says a man in a red baseball cap, hoping I need only the compressor and the mechanic can get back to his motorscooter. “No, puncta,” I say, and he concedes the inevitable pecking order, repeating, “Ah, puncta.”
Watching the young man work is better than any ballet. With a swift move, he flips the bicycle on its handlebars and seat and reaches to his table for a yellow-handled screwdriver. While continuing a steady and off-color banter with the fisherman perched on the motorscooter and not even looking down at my tire, he breaks the bead around the rim and removes the tube.
This is why I came to him. Left to my own I would have inverted the bicycle as he had done and then removed that front tire from the frame, using an adjustable wrench. I would've used a specially curved and coated bike tool to break the bead on both sides of the rim and very carefully extracted the tube. That whole process might have taken me five minutes. While not even stopping talking, he accomplished the same feat in 15 seconds, entirely by braille.

He reached for his air hose and filled the tube. He immediately spotted the leak but with the tube still bound within the front fork of the bike he brought over a bucket and ran the tube delicately through water to see if there were any more. Then he went into a shop and brought out a power drill with a grinding wheel mounted on the front. He carefully sanded the area of the leak, then he reached to his table and got a patch and faster than I could even observe planted it on the tube. He repeated the process of running the tube through the water bucket. Satisfied the patch was good, he quickly deflated and ran the tube back into the tire and, using his bare fingers, reseated the tire into the rim. Once more he used the air hose, filling the tire to a pressure designated by his fingertips. Then he screwed on the nozzle cap, squeezed the back tire, determined it needed a little air too, inflated that, and, still holding the air hose in one hand, flipped the bike back up on its two wheels.
For his five minutes of work I handed him a 50 peso note, a little over 4 dollars. He went to his cashbox and returned me 40 pesos change. The repair had cost me 83 cents. I would have insisted on giving him more pesos but in front of his friends it would have dishonored him.
In a tough economy this artisan will do well, because people will come to him even though they could do the job themselves. They will come to him not just to save themselves time and work, but to enjoy a display of acrobatic grace and poise; to witness a master at his trade.