"The hopeful transnarrative of 'la Cumbre de las Naciones Unidas sobre Cambio Climático' in Cancún is one of metamorphosis."

Last year, as faithful readers of this blog may recall, the USA, which has yet to ratify any climate treaties and should not be here in any capacity other than observer, came with a lame, lowball proposal of a strictly voluntary, symbolic pledge system, quickly derailing a meeting that was actually close to signing into international law several important agreements.

This year, many are more wary. Some say the US needs to be kept out of the tent while more serious negotiators complete their work. An important new study from the United Nations Environmental Programme, The Emissions Gap Report: Are the Copenhagen Accord pledges sufficient to limit global warming to 2°C or 1.5°C?, concludes that the US pledge system will not reverse climate change, even if it were universally adopted. UN Undersecretary-General Achim Steiner said in his introduction to the report, “If no clear rules are set in the negotiations, emissions could be around 53 Gt of CO2  equivalent in 2020 — not that different from business as usual — so the rules set in the negotiations clearly matter.  … emissions need to be around 44 Gt of CO2 equivalent by 2020 to have a likely chance of pegging temperature [increase] to 2°C or less.”

People like to be assured that someone is minding the store, even if they aren’t. So when these high-level delegations get together for the 16th time, or the 33rd time, or whatever, there is some sense of order in the world, even if it seems to keep getting hotter. On the eve of this year’s summit, stock markets surged in Asia, Europe, Latin America and the USA. The Hang Seng broke 25000, the Mexican IPC broke 35000, and even the Dow broke above its support levels. This shows a renewed confidence in the future, even if it also shows more than a small amount of ignorance of the actual situation in the world. More sober assessments came this month from a report from the University of California Santa Barbara, “Peak Energy, Climate Change, and the Collapse of Global Civilization: The Current Peak Oil Crisis” and a more enticeingly captioned study by Feasta: The Foundation for the Economics of Sustainability called Fleeing Vesuvius.


Brad Johnson, reporting for Climate Progress,  says that, psychologically, we humans like a happy ending for our stories. As the behavioral researcher Melvyn Lerner first described in 1965, people need to believe in “a just world” — i.e., “good things happen to good people.” A recent study that placed these predispositions into the climate context concluded that those who have a low belief in a just world respond well to a message of dire scientific threat. Those who have a high belief in a just world respond to a hopeless conclusion with skepticism and a hopeful conclusion with acceptance. 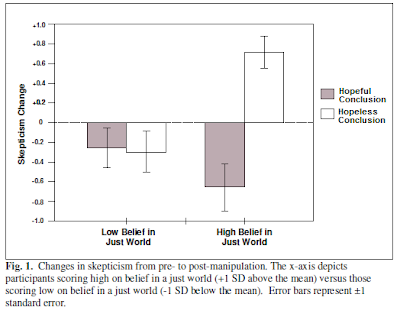 The researchers showed their subjects two public service announcements from 2007 that make a strong emotional appeal, one with a train accelerating toward a child and the other with children “ticking.”  Subjects responded differently, depending on the tag line and their personal need for justice.

Johnson concludes, “In short, the researchers found that the approach taken by leading climate messengers such as Al Gore (An Inconvenient Truth), Van Jones (The Green Collar Economy), and Bill McKibben (350.org) of combining scientific urgency with solution-oriented hopefulness should be successful.”

The hopeful transnarrative can be found in UN Peace Ambassador Wangari Maathai’s post to The Guardian on November 26.

“It is true that no delegate leaves a conference with a perfect document, but last year in Copenhagen we caught a glimpse of the potential we have if we tackle this global crisis together. For the first time, 115 countries recognized the scientific case for restricting the rise in global temperatures to 2°C. For the first time ever, all the major emitters of the world accepted their moral responsibility to reduce their emissions and committed to build trust and transparency. And for the first time ever, we set out our interconnectedness, with developed countries offering to help the poorest countries to protect their people from climate change and to find a path to low-carbon sustainable development.”

There is a distinction to be found, however, between solution-oriented hopefulness and pie-in-the-sky narratives that continue us all down a path to ruin. Regrettably, many in the South still cling to a “developed” versus “developing” dichotomy that is both out of step with new financial arrangements (wherein the BASIC group of Brazil, South Africa, China and India have supplanted the flailing empires of Europe, Japan and North America) and the notion that somehow every increasingly populous country can not only stave off starvation when fossil fuels are gone but somehow grow just as caustic to the environment as USAnians. We can sample this right here in México with a simple excursion to a Cancún shopping mall.

Another false narrative, and one that regularly makes the rounds in Washington, is that market-based solutions – the green business model — can solve the problem of climate change. Market-based mechanisms are highly unlikely to reduce emissions, especially in the emerging economies. Market incentives can stimulate rapid adoption of better practices, but they are meaningless and unworkable in the absence of a firm and enforceable emissions cap. 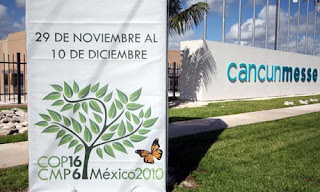 The symbol México has chosen for the conference is the Monarch butterfly (Danaus plexippus). It is an interesting choice, because the Monarch is cold-sensitive and the population west of the Rockies migrates to Southern California each winter while the population east of the Rockies migrates to Michoacán, México. It takes several generations of butterflies to complete the annual migration, following the progress of  milkweed emergence northward, and for each generation a metamorphosis is required.

The butterflies mate and lay eggs, and caterpillars emerge from and consume the egg cases, feed on milkweed, and make cardenolides, a type of cardiac glycoside that makes them too bitter for birds to want. After 2 weeks of gorging on greenery, the caterpillar spins a silk pad on a leaf and hangs from this pad by its last pair of prolegs. It hangs upside down in the shape of a 'J', and then molts, leaving itself encased in a leaf-like green exoskeleton. Hormonal changes occur that are so unusual that the caterpillar’s immune system attacks the new cells, trying to defend itself. Eventually the old form loses and is turned into an enzyme soup, leading to the development of a transparent butterfly chrysalis that, a day before emergence, darkens to a butterfly’s body with orange and black wings.

The hopeful transnarrative of “la Cumbre de las Naciones Unidas sobre Cambio Climático” in Cancún is one of metamorphosis. From a messy process of reconciling the interests of collapsing empires (struggling to exact tribute from wayward colonies by military and economic brutality) with the pre-doomed aspirations of the oppressed for consumerist empires of their own, to some rational scheme for going forward for another year, and maybe planting a few trees along the way.

Who knows? Maybe a butterfly will emerge.

From The Earth Charter

Earth, Our Home
Humanity is part of a vast evolving universe. Earth, our home, is alive with a unique community of life. The forces of nature make existence a demanding and uncertain adventure, but Earth has provided the conditions essential to life's evolution. The resilience of the community of life and the well-being of humanity depend upon preserving a healthy biosphere with all its ecological systems, a rich variety of plants and animals, fertile soils, pure waters, and clean air. The global environment with its finite resources is a common concern of all peoples. The protection of Earth's vitality, diversity, and beauty is a sacred trust.


***
The choice is ours: form a global partnership to care for Earth and one another or risk the destruction of ourselves and the diversity of life. Fundamental changes are needed in our values, institutions, and ways of living. We must realize that when basic needs have been met, human development is primarily about being more, not having more.

In order to build a sustainable global community, the nations of the world must renew their commitment to the United Nations, fulfill their obligations under existing international agreements, and support the implementation of Earth Charter principles with an international legally binding instrument on environment and development.

Let ours be a time remembered for the awakening of a new reverence for life, the firm resolve to achieve sustainability, the quickening of the struggle for justice and peace, and the joyful celebration of life.