So Much Hockey Puck

"Reality is merely an illusion, albeit a very persistent one." — Einstein

Lately we have been getting more mail from people who take issue with the whole thesis of global warming, never mind the existential crisis it poses for all living things in this corner of the Universe.

One of the arrows that I find stuck in my door is the notion that Michael Mann fudged his data to come up with the original hockey stick graph of the historic warming trend, and, ergo, since everything written after that has relied on the Mann proxy data set, the entire IPCC house of cards must tumble if Mann is discredited.

University of Virginia climatologist Michael Mann and his colleagues set about, some decades ago, to attempt to reconstruct temperature data for as far back as they could go. The concentration of CO2 and other greenhouse gases is now known quite accurately back to 650,000 years from ice core data, but ambient temperatures during those eons are another story.

In my 1990 book, Climate in Crisis, I provided graphs showing that the Vostok core data was only an approximate match to the temperature data, and that numerous anomalies could be plainly seen. Atmospheric carbon and temperature rise and fall similarly, in tandem, but not identically.

Since actual instrument temperature readings only go back 150 years and are primarily centered in Europe, Mann’s group had to look to other “proxy” data sources: tree rings, ice cores, sediment cores, corals, ocean temperature gradients, borehole temperature data, and the like.

Many studies have been done, and while they differ in details, the common picture is that temperatures were warm during medieval times (1000-1700), cooled to low values in the 17th to 19th centuries, and warmed rapidly after that. Before about 2,000 years ago, we can’t really say much with accuracy, but we can see broad trends. For most of the last 11,600 years global temperatures were cooler than at present. To find temperatures above where we are now, you have to go back 3 million years, when there was much less ice and much more ocean. Between then and now what we see are the gradual temperature changes (4–7°C) between the ice ages and the warmer interglacials, a process that typically unfolded over 5000 years in each direction. 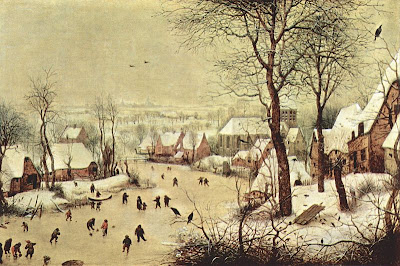 I said all this in Climate in Crisis, but one other thing we can say now is that the present rate of change is profound by any measure. If projections of a 5-degree shift in a single century are realized by our children and their children, it will be unmatched in the 50-million year proxy data record.

As regards Mann’s hockey stick, we can also say with considerable confidence that the warming observed since 1980 is unmatched in the previous 280 years, even putting greater error bands on Mann’s and others’ data. There is indeed a blade on that stick.

Now, the arrows in my door often have scrolls tied to them, directing me to the statement of Dr. David Deming, College of Earth and Energy at the University of Oklahoma. Deming testified to Congress in December of 2006 that Mann was a fraud and a charlatan and one need only look at the Medieval Warm Period during which global temperature conditions were warmer than those at present. Deming said:

“The late 20th century appears to be nothing special by comparison. It is easy to see why this graph was a problem for those pushing the global warming alarm. If the world could warm so much on such a short time scale as a result of natural causes, surely the 20th century climate change could simply be a natural effect as well. And the present climate change could hardly be considered unusually hazardous if even larger climate changes happened in the recent past, and we are simply fluctuating in the middle of what nature regularly dishes out?”

This is, of course, exactly what Republican torture-cheerleader Senator Inhofe and the other climate dunces in the thrall of Exxon/Mobil love to hear. You can be sure that if Deming had not received some fat grants for his department before that, he has all the money he can ever want now.

Of course, I am well aware that the Medieval Warm Period was not warmer than the last decade, and moreover, I am fascinated by the recent hypothesis that the cooling period which followed it, known as the Little Ice Age, may have been caused by the European contact with the Americas, the decimation of the populations there, and the reversion of their farms and cities to forest and jungle, thereby massively shifting the earth-atmosphere carbon equation. Might it not also be possible, I reasoned, that the inverse is also true: that the Medieval Warm Period came from the huge build-up of civilization in the Americas, with their plows and lime kilns, and the destruction of the natural world that accompanied all that? To be fair, one also would have to factor the city-building accomplishments of the Ming Dynasty, the destruction of the forests of Indochina, the Black Plague, and the extension of the Ottomans into Southern Europe in this period.

So imagine my surprise when some of those whose opinions I most respect counted themselves among the Deming Dunderheads. Since I respect these people, I had to actually take the time to revisit the Fourth IPCC Assessment and see if, as the critics make out, the IPCC is either duped or worse, part of the cover-up of Michael Mann’s shoddy science. I was quickly reassured. Deming’s points are now out-of-date, flat wrong, or highly misleading.

At Section 6.6 of Working Group 1’s latest published assessment, the IPCC devotes several pages to the Mann controversy, carefully weighing the claims of his critics, validating their concerns where appropriate, but then trotting out a truly impressive array of confirming research that supports the general hockey stick thesis. The most they could offer the critics was the concession that in some regions, at some times, temperatures in the Medieval Warm Period may have exceeded the current decade. They hasten to say, however, that there is a considerable difference between regional observations and global averages. Ocean heat transport down to depths as deep as 3000 meters has absorbed much of the recent anthropogenic warming, for instance. 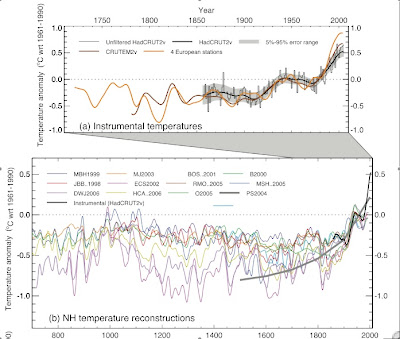 All of this reassuring from the standpoint of my previously disclosed “Houston moment” but not very hopeful from the standpoint of rescuing the human prospect. The deniers can easily whip up sentiments among people recently brought to the brink of acceptance of climate change to discount Al Gore, Jim Hansen and the other town criers, and go back to your consuming ways, it is all going to be okay. And, you know, as a species, we may actually be that dumb.
Posted by Albert Bates at 12:02 PM

Perhaps the arrows in your door are a distraction to try and waste your time with eyes in the sky when they should instead be on the soil as you mentioned earlier, what Vendana Shiva had pointed out. "Real reform will happen when discussions move from the stratosphere to the soil, and when we find new, non-industrial ways of thinking." The industrial way of thinking is the hardest thing to reform it seems. So many so-called "green solutions" seem to be based on continued industrial thinking. There seems to be no food forethought.