It has been about six or eight years since the Jitterbugs (Popillia japonica) showed up here for their usual cycle. They began on the giant pole bean bush we had next to the Eco-hostel. It ran up three stories on the side of the building, weaving through a column of hogwire and onto the fire escape.

We countered with Milky Spore (Paenibacillus popilliae) powder and beetle traps, but for several years the infestation got worse, and then last year, after the exceptionally late frost, we had a very light beetle year. This year, with a mild Spring and plenty of moisture in the ground, they failed to show up by mid-June. I had my fingers crossed that we might be done with them. But now, just before Independence Day, they are back. 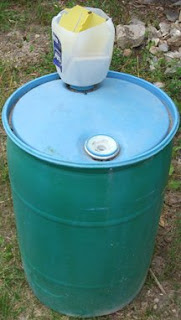 This time they are not in the yard around the Eco-hostel where they first appeared. Usually our cherries are threadbare by the end of May and they are working into the apple trees and wild plum. This year they showed up inside the garden, still relatively few, but steadily gaining numbers. I went to town yesterday and picked up some traps and fresh pheromone bait and this morning I emptied a 30-gallon water barrel from the greenhouse (where we keep it to hold heat in the winter) and set it out by the wild plum to start catching bugs.

My experience is that those plastic bags that come with the traps fill up in a couple days and have to either be emptied (ugh!) or tossed (where?), so a few years back I went to first 5-gallon buckets and then 30-gallon barrels. We’ve been known to fill two or three barrels in a season.

I have also been known to get out the Shop Vac and vacuum the beetles off the leaves of plants that are especially valued.

This year we are experimenting with full-sized chickens, which is unusual for us, because we are bantam lovers. We like the little guys because of the light touch they give to weeding the garden. Still, we have more egg-eaters on staff this year, so the big chickens — Dominics and Reds — make sense, if we can keep them from uprooting the vegetables. 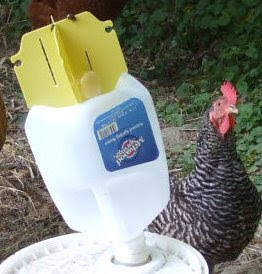 When I set out the barrel trap, I immediately attracted the attention of our sitting hen, roosting on her “secret” nest of eggs in the geodesic dome. She immediately started catching the beetles out of the air as they flew towards the trap. That told me the big chickens like sushi beetles better than our bantams did.

So I set a smaller trap, in a 5-gallon bucket, out in the fenced yard that we use to keep the flock out of the garden except under supervision. Within minutes, the bait’s scent was wafting on the wind and beetles were vectoring in through the fence from the garden. The chickens all came running and did this crazy dance, leaping and twirling in the air, catching the bugs as they circled the bucket or slowed to land on the bait. They were really quite elegant and athletic, these old hens. The rooster just stood back to coach the team.

In permaculture we say every problem is also a solution. Did we have a beetle infestation or a chicken deficiency? We seemed to have matched the predator to the prey for now, and any that the chickens don’t get will eventually make it from the drums to the compost pile. 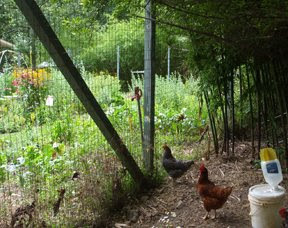 My neighbor takes it a step farther and attaches his beetle trap to a length of 4-inch pipe, which he suspends over his fish pond, leaving a space between the bottom of the pipe and the surface of the water. As the beetles swoon from the intoxication of the pheromone bait, they fall through the pipe, onto the water, and into the open mouths of perch hovering at the base of the pipe. In a further improvement, he added a string weed-eater and a 12-volt light to his dock on the pond, and powered it with a small PV panel and a car battery. He put a motion sensor on it and when he turns on the light at night, moths and bugs are drawn in, get hit by the rotating string, and fall into the pond, where the fish, who also associate the light with food, are waiting.

And, of course, the man who turned on the light can just reach down and net his dinner any time. After a few days, he doesn’t even need the bugs. The fish are trained.
Posted by Albert Bates at 7:36 PM