Thank You For Pumping

David Blume was here this past weekend as an invited speaker at our Transition Towns’ style Sonnenshein Festival in Hohenwald, our county seat. This is the third annual one of these and this year we brought in Dave and Catherine Austin Fitts to speak, first to a theater full of townspeople, then at the Ecovillage Training Center, and then at the Lewis County Chamber of Commerce. The Chamber liked it so much they want a follow-up. 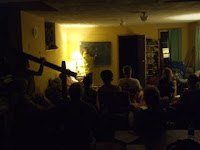 Dave made an interesting point before the various assemblies that I have heard him make before, but he has taken to making it sound like clever business by evil oil companies to help the audience digest it, and I want to strip that sugar coating off. The point is about how gasoline is made, which is not unlike how sausages are made – you don’t want to know.

When someone like Exxon-Mobile or Chevron gets a barrel of light sweet in from OPEC, that 42-gallon barrel is now costing them nearly $140 on the open market. The refinery's distillation process separates it into various raw cuts, from gaseous fuels and naphthas at the top, to jet fuel, kerosene, gasoline in the middle, and then to diesel, fuel oil and asphalt at the bottom of the barrel. All these various primary products are pumped to other specialized refineries for further processing and upgrading. The secondary refiners also make the products environmentally acceptable by removing sulfur and various trace components that would be toxic if burned. 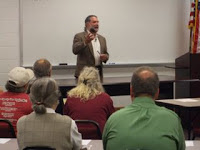 Incidentally, all these processes use tremendous amounts of energy, materials, and labor, so it is reasonable that they add value to the oil.

About 4% of every barrel goes into the light fuel gases that will be made into exotic and expensive chemicals: Nylon, Kevlar, high-tech polymers, Saran Wrap, plastic bags, and Twinkies. Currently that 4% is worth around $50 per barrel or $2 per gallon before secondary refining, but after the secondary processes, it becomes worth hundreds or even thousands of dollars per gallon. This is the part that makes the business worth being in for Exxon, Shell, Total, and all the rest.

About a quarter of the barrel goes into jet fuels, diesel, industrial lubricants, and the like. Those bring another $160 as raw products, but far more after they are refined into things like STP, pesticides, herbicides, and cleaning solvents, often through separate divisions of the same companies.

The gasoline blends are about 55% of the barrel, and since the oil companies have already made their money back on the top fractions, they don’t really need to keep going, except that they have a small problem. Refining the oil to get those nylons and polymers produced a lot of nasty long-chained byproducts that are terribly toxic. So they go ahead and continue the practice(s) begun by John D. Rockefeller and make various blends of gasoline, and they spend a small fortune on defeating climate change legislation, bidding up corn futures, and bribing politicians to ensure a profitable market awaits those products. Also, they sponsor NASCAR.

The 16% left after gasoline winds up as fuel oil or asphalt, about another $50 worth from every barrel after the primary refinery. The gasoline made from that original barrel is sold for about $170 at today’s wholesale price, but that is not its greatest value to the refineries. 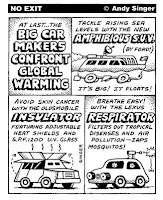 The gasoline, which has to go through numerous blending stages, is a carrier for the toxic waste that would otherwise have to be somehow disposed of, at considerable expense and under tight regulations. By blending those unusable byproducts, which vary from barrel to barrel, day to day and hour to hour, the companies get rid of their biggest headache. They sell it to you and me.

Those of us who pay at the pump are now shelling out $4 per gallon to burn and then inhale those toxic wastes, but actually that is less than half of what the oil companies are being paid for that product.

Currently the various tax incentives, depletion allowances, and other subsidies (which Congress failed again today to repeal, blocked by the oil companies allies on the Republican side and a threatened veto from the White House) are worth $5.60 per gallon. If you added in the military costs, including veterans’ benefits and later war reparations, the subsidy is at least triple that, paid by U.S. taxpayers, but from the company standpoint, the $9.60 is what they collect. When their CEOs testify before Congress that they only make a nickel a gallon, they really have to work to keep from laughing, and that ability is probably why they get paid so much.
Posted by Albert Bates at 9:11 PM