"Watt recognized, like few others in business, that carbon neutral is not good enough. We have to go beyond zero not decades hence but now. Today." Almost all ancient civilizations had a God of Beer. Recently another ascended from out of nowhere, or rather, from the world of beer, but I am canonizing him less for being a Beer Olympian than for getting into the Legion of Drawdown Superheroes.

Into our epic saga of how human life on Earth came to be rescued in its final desperate hours comes punk brewmaster James Watt. In 2007 he launched, with Marvin Dickie, a string of pubs called BrewDog, that grew to 102 bars across the globe and craft beer brands today consumed in more than 60 countries. In 2010, they claimed the world record for the strongest beer ever made with a 110-proof IPA called “The End of History,” with a nod to Francis Fukuyama.

That beer sold for 700 pound sterling per bottle, making it also the most expensive beer in history. A government panel tasked with encouraging responsible alcohol consumption criticized another, less potent (18.2%) of BrewDog’s beers named for the firebombing of Tokyo. Watt’s thumb-to-the-nose response was to create a low alcohol beer and market it as “Nanny State.” A warning on the label of BrewDog’s Tactical Nuclear Penguin (32%) states: “This is an extremely strong beer, it should be enjoyed in small servings and with an air of aristocratic nonchalance. In exactly the same manner that you would enjoy a fine whisky, a Frank Zappa album, or a visit from a friendly yet anxious ghost.”

Tactical Nuclear Penguin began life as a 10% imperial stout in June 2008. The beer was aged for eight months in an Isle of Arran whisky cask and eight months in an Islay cask making it the company’s first double cask aged beer. After an intense 16 months, the final stages saw the beer stored at -20 degrees in an ice cream factory for three weeks. As the beer got colder, BrewDog Chief Engineer Steven Sutherland decanted the beer periodically, leaving only ice in the container, creating more intensity of flavors and a stronger concentration of alcohol for the next phase of freezing. The process was repeated until it reached 32%. 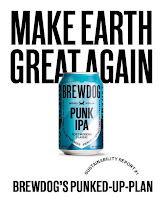 Like its beer ghosts, BrewDog’s team spirits soared, along with its stock value.

I am writing to tell you that things over the next few months are going to be very, very difficult for us.
Covid-19 has already had a colossal impact on our business and we have lost almost 70% of our revenue overnight.
The reality is our business, and the vast majority of businesses, now face a fight to be able to survive and make it through this crisis.
We have two main priorities at the moment. Number one: survive. Number two: preserve as many of the 2,000 jobs we have created at BrewDog as possible. Twenty of BrewDog’s recently opened bars closed permanently, sending their penguins off the floes. A drive-through service was offered in some locations where alcohol sales were still permitted. Part of the distillery began making a hand sanitizer, which the company gave out for free. But there was no escaping how catastrophic the pandemic was becoming for them.

Before he put on a hops apron for the first time, Watt had been a licensed sea captain with an honors degree in law and economics. He also self-styled himself a loudmouth punk, an anti-business businessman. His 2016 paperback, Business for Punks, did not excise profanities but still managed to land Penguin as a publisher and hit high up the Amazon business charts.

Business for Punks
BrewDog's co-founder James Watt offers a business bible for a new generation. It's anarchic. It's irreverent. It's…www.penguin.co.uk

One piece of his book’s advice may explain how Watt later earned my recommendation for climate solutions sainthood: “In marketing, lead with the crusade, not the product.” Before the crisis, Watt had gone to Professor Mike Berners-Lee, researcher and author of How Bad are Bananas? The Carbon Footprint of Everything, at the Institute for Social Futures of Lancaster University. Berners-Lee’s team, Small World Consulting, penned BrewDog’s Sustainability plan, titled Make Earth Great Again.

How Bad Are Bananas?
BRAND NEW EDITION OF BESTSELLING GREEN GUIDETen years on from first publication, a new edition of this invaluable and…profilebooks.com 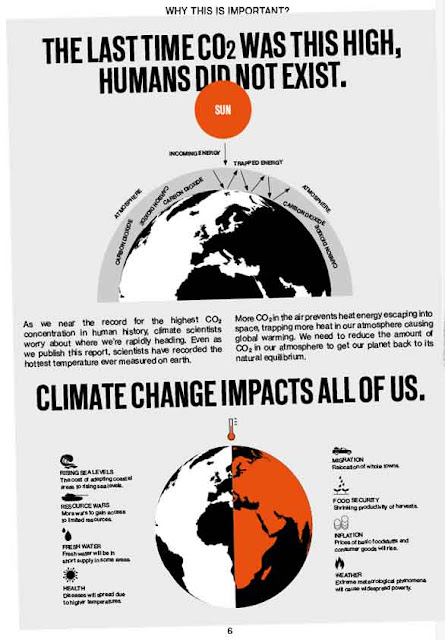 BrewDog’s breakthrough brand was Punk IPA introduced at a moment when craft beers were exploding. Recognizing before most that the key to craft was keeping it local, BrewDog kept its pubs edgy and intimate and spread them out, stocking them with limited edition local beers.

“We have been a Marmite* brand pretty much from day one,” Watt said, in a long LinkedIn post responding to critics of his perceived arrogance.

*Marmite is a distinctively UK, black, salty spread made from spent beer grains, invented by Justus von Liebig in 1902 (its called Vegemite in Australia).

“People often criticize us, sometimes for good reason too. All companies make mistakes, we have made many on our 13 year journey and we are always happy to hold our hands up when we get something wrong, and we have done so on many occasions.”

At the end of August, BrewDog announced that it had become the world’s first carbon-negative international beer brand. This time, it had got something right. Really right.

BrewDog dug itself out of the hole the pandemic had dug for it the same way it had built its brand in Northern Scotland. It went to the people with its crowdfunding initiative, Equity for Punks. It raised £73m (US$ 97.6 million) over six rounds to “scale up without selling out.” 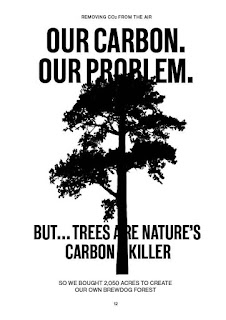 “The scientific consensus is clear: we are sleepwalking off the edge of a cliff. Unless the world confronts the urgent carbon problem, science tells us that the results will be catastrophic. There has been too much bullshit for too long. Governments have proved completely inept in the face of this crisis. The change our world and society needs has to come from progressive business and we want to play our role and nail our colors to the mast. Huge change is needed right now, and we want to be a catalyst for that change in our industry and beyond.”

Other initiatives outlined in the report include:

Watt recognized, as few others in the spirits industry, or any other business, that carbon neutral is not good enough. We have to go beyond zero not decades hence but now. Today.

BrewDog has pledged to remove twice as much carbon from the air as it emits every year. Work on the forest is expected to start early in 2021 but in the meantime the company will be working on a series of projects for offsets.

If this were mainstream media, our tale could wrap up here — a story of inspired creativity and turnaround in the face of global challenges. But I am not your usual storyteller. I am a determined sequestrator with high, nigh impossible, goals. Next week I will take this story up a notch by looking at what BrewDog might have done, and may still do, to multiply their carbon cascades. 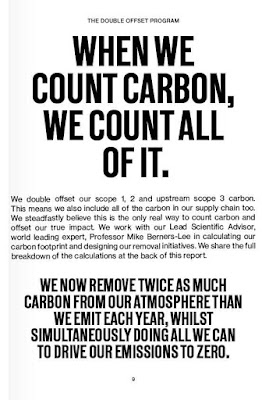 Your Patreon donations and Blogger subscriptions are needed and welcomed. You are how we make this happen. Your contributions are being made to Global Village Institute, a tax-deductible 501(c)(3) charity. PowerUp! donors on Patreon get an autographed book off each first press run. My winter book, Dark Side of the Ocean, is shipping out now. My next book, Plagued, should be out in a few months. Please help if you can.