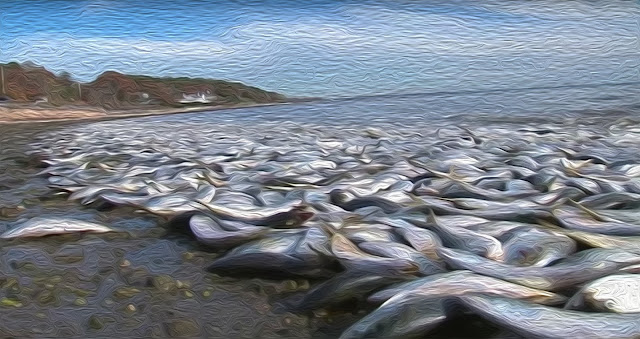 If you have ever been in a smoke-filled room and wanted nothing more than to go outside and get a breath of fresh air, you can relate to the experience of your average flounder.

Fish don't breathe air, but they still take in oxygen dissolved in the water around them, and if those oxygen levels drop too low, they can strangle.

When we try to think about the effect of the climate emergency on oceans, we tend to imagine warming seas, bleaching corals, algae blooms, super-hurricanes, and inundating coastlines. We don’t often think about oxygen. And yet, major extinction events in Earth’s history have generally been associated with oxygen-starved oceans, most often during climate change epochs.

In the process of  absorbing a majority of the excess carbon dioxide we’ve produced, the open ocean gave up an estimated 2 percent, or 77 billion metric tons, of its oxygen over the past 50 years. That is an astonishing number, but one seldom noticed unless you are a water-breather.

As a result, oxygen-minimum zones (OMZs) expanded to cover areas in aggregate about the size of the European Union (4.5 million square kilometers). Anoxic dead zones (devoid of oxygen) have more than quadrupled. For your average fish, this means trying to steer clear of OMZs and dead zones, mainly along the coasts where corals and mangroves once provided optimal conditions for life but now suffer inundations of topsoil, agricultural chemicals, plastics, radioactivity, and deadly algal blooms. Adaptive avoidance patterns make the schools easy targets for the sophisticated sonar systems and satellite services affordable to every fishing boat. Fisherman merely glide to the edges of oxygen-starved zones and wait for the catch to come to them.

Just the upper 3300 feet of ocean has lost up to 3.3% of its oxygen since 1960. If you are at sea level, the air you breathe is about 20% oxygen. Removing 3.3% would be like hiking up 5000 feet. That is still breathable—similar to the summit of Mt. Washington, New Hampshire—but consider that the recent 3.3% change was over just the past 60 years, and is accelerating. There might be an 6 or 8% difference from the 20th Century in another 30 years, which would be like climbing Pike’s Peak. We can still breathe, but for how much longer? At 10 or 12 percent deficit we would need to bring oxygen tanks to climb any higher. What is a flounder going to do?

If we are concerned, and we should be, there are things we can do right now to reverse this. The IPCC’s Special Report on Ocean and Cryosphere, released earlier this year, said:


Increased nutrient and organic matter loads in estuaries since the 1970s from intensive human development and riverine loads have exacerbated the stimulating effects of ocean warming on bacterial respiration, leading to expansion of low oxygen areas. 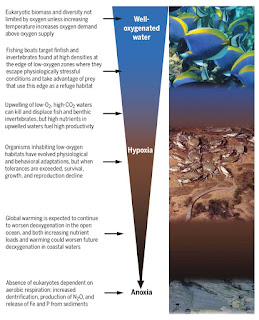 The first thing we can do, then, is arrest nutrient runoff into rivers and estuaries. A number of cities are using large biochar filters to span urban outfalls, intercepting nitrogen and the particulates that biochar is so good at capturing, adhering, and storing.

IPCC reports that serious oxygen loss at between 100 and 600-meter depths (328 to 1970 feet) is expected to cover 59–80% of the ocean area by 2031– 2050. While some of that can be attributed to algae blooms deriving from all the fertilizer washing off land (extreme rain events boost the effect), the 400 lb. gorilla in the room is climate change. If we want to slow the process, we’ll need to address that.

A review by Denise Breitburg and 21 co-authors in the January 2018 issue of Science observed that ocean warming reduces the solubility of oxygen.


Decreasing solubility is estimated to account for ~15% of current total global oxygen loss and >50% of the oxygen loss in the upper 1000 m. of the ocean. Warming also raises metabolic rates, thus accelerating the rate of oxygen consumption. Therefore, decomposition of sinking particles occurs faster, and remineralization of these particles is shifted toward shallower depths, resulting in a spatial redistribution but not necessarily a change in the magnitude of oxygen loss. Intensified stratification may account for the remaining 85% of global ocean oxygen loss by reducing ventilation—the transport of oxygen into the ocean interior.…

Breitburg and colleagues make a number of excellent recommendations:

Local, national, and global efforts are required to limit further oxygen declines, restore oxygen to previously well-oxygenated environments, and enhance the resilience of ecosystems affected by deoxygenation. At their most basic level, the actions needed to address deoxygenation — reducing nutrient loads to coastal waters and reducing greenhouse gas emissions globally — have substantial benefits to society above and beyond improving oxygen conditions. Improved sanitation can benefit human health directly while also reducing coastal nutrient loads. Eliminating excess and inefficiently applied fertilizer can reduce costs to farmers and emissions of N2O and may decrease nitrogen loads to waterways. Eliminating emissions from combustion of fossil fuels can reduce greenhouse gas production and may result in decreased atmospheric deposition of nitrogen that stimulates primary production in coastal waters. Reducing or eliminating greenhouse gas emissions can, more generally, lower the threats from global warming and ocean acidification and, simultaneously, reduce ocean deoxygenation. Improved management of fisheries and marine habitats that are sensitive to the development and effects of low oxygen helps to protect economies, livelihoods, and food security. 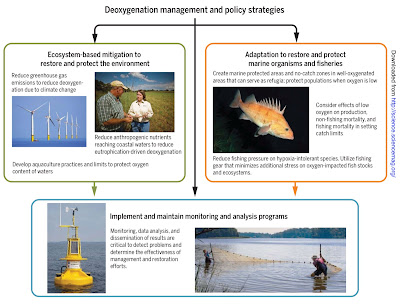 While some long-term marine ecosystem changes cannot be avoided, others are yet reversible if we act quickly. So, for instance, if we follow the recipe laid out by Kathleen Draper and I in Burn: Using Fire to Cool the Earth (Chelsea Green 2019), we could within a few decades be withdrawing 50 or more billion metric tons of carbon dioxide (50 GtCO2) from the atmosphere (and oceans) annually through a new, regenerative, revitalizing, circular carbon economy, using processes we’ve termed carbon cascades, tailored to target the Sustainable Development Goals. If at the same time nations muster the will, such as through meetings like the upcoming COP25-Madrid, to halve emissions from 39 GtCO2 to 20 GtCO2, we could be net subtracting 30 GtCO2 annually.

That might give our friends the flounders a breather.

You encourage me to do more and then tell you about it. Help me get my blog posted every week. Kathleen Draper and I will be attending the climate summit in Madrid and giving talks there. All Patreon donations and Blogger subscriptions are needed and welcomed. Those are how we make this happen. PowerUp! donors on Patreon get an autographed book off each first press run. Please help if you can.