NTHE is a Four Letter Word

"Collective neurosis can be attributed to a concatenation of causes — diet, electrosmog, epigenetic triggering by microplastics in our toothpaste — take your choice."

We are not talking about climate deniers now, who have their own brand of insanity, but we keep hearing the same mantra chanted by otherwise respectable scientists and policymakers that, “climate change may be catastrophic but it won’t be the end of us.”

We hear that so often we almost never challenge it, not wishing to divert an otherwise productive conversation into what we know to be a blind alley. Nonetheless, we think the statement is at best deluded and at worst just a milder form of denialism. It is not science. It is faith. It is also human neurophysiology.

Brain imaging research has shown that a major neural region associated with cognitive flexibility is the prefrontal cortex — specifically two areas known as the dorsolateral prefrontal cortex (dlPFC) and the ventromedial prefrontal cortex (vmPFC). Additionally, the vmPFC was of interest to the researchers because past studies have revealed its connection to fundamentalist-type beliefs. For example, one study showed individuals with vmPFC lesions rated radical political statements as more moderate than people with normal brains, while another showed a direct connection between vmPFC damage and religious fundamentalism. For these reasons, in the present study, researchers looked at patients with lesions in both the vmPFC and the dlPFC, and searched for correlations between damage in these areas and responses to religious fundamentalism questionnaires.

In the quote above, Azarian is referring to a study published a year ago in Neuropsychologia that connected cognitive flexibility with the ventromedial prefrontal cortex and proved that damage to that part of the brain hinders adaptive or flexible behavior, locking out world views that run contrary to some preconception. The study correlated brain-damaged veterans with religious fundamentalism.

The preconception most often grasped by NTHE deniers is the notion that “humans survived far worse cataclysms to arrive at their present condition” —  the Toba event 70,000 years ago, for instance, when the human population was reduced to perhaps 10,000–30,000 individuals — “and we invariably rebound.”

The example most often cited is the 2005 Rutgers mDNA study showing all pre-1492 native populations of the Americas  —  well over 1 billion by some estimates  —  having descended from 70 or fewer individuals who crossed the land bridge between Asia and North America.

This is a variant of the techno-cornucopianism of Bill Gates or Elon Musk, but in their cases — building new desert cities in Arizona or seed colonies on Mars — that being externalized, absent a cold fusion Spindletop, is biophysical economics.

We have previously reviewed the hypothesis of Danny Brower and Ajit Varki that an evolutionary leap allowed homo to access higher consciousness by hard-wiring a neural pathway for denying reality.

Arguably that same pathway induces otherwise rational-seeming people to allow for the possibility of catastrophic climate change (already well underway) while denying the possibility of it leading to near-term human extinction (NTHE).

In our view, this colors the debate over what we should be doing by reducing the urgency.

Ironically there may have been human genotypes that suppressed their denial gene better than ours does. One of the effects of genetic bottlenecks is that selected genes (such as those offering a more balanced use of denial) fail to be passed along to succeeding populations.

Our personal view is that while we think NTHE can yet be avoided, the time for action grows short and as we as we walk out onto the razon’s edge and grow more desperate we will likely make many foolish mistakes, any one of which could trigger NTHE. Appointing John Bolton the National Security Advisor, for instance. In 2016 USAnians fed up with the tweedledee-tweedledum two-party system opted to just hurl a hand grenade into the White House and stand back. If one grenade was not enough, we still have President Bannon to look forward to in 2020 or 2024 if Cambridge Analytica can keep up with the AI revolution with respect to Big Data. 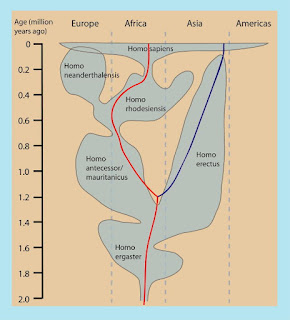 Collective neurosis can be attributed to a concatenation of causes — diet, electrosmog, epigenetic triggering by microplastics in our toothpaste — take your choice. Visionary forebears who saw these bottlenecks coming — Garrett Hardin, R. Buckminster Fuller, M. King Hubbert — all argued that the best antidote was better public education. But at least in the US, public education was hijacked in the ‘90s by the vmPFC-lesioned hoards of Zombie Fundamentalists before being handed over to Betsy DeVoss for the final coup d’gras. Whatever long wave or ergot diet issued humanity into the Dark Ages seems to be replaying now, and it could hardly arrive at a worse time from the standpoint of the organized climate solutioneering required to avert Anthropogenic NTHE.

We need to be in top form to survive this next bottleneck. We’d do better without the denial. Too bad climate scientists can’t afford to hire Cambridge Analytica themselves.

There's an interesting irony that NTHE isn't allowed in the American mental space. Given our Puritan past and the Christian Fundamentalist takeover, it seems right in line with the much-pined-for End Times. Maybe including Jesus coming back would make it more palatable.

To be serious, while I don't have much patience with the average American's mental ability, I have to be generous and note that we are all actively discouraged from building up that muscle. As you note, Fundamentalists and Powell Memo devotees used each other to put us to sleep and jam the thoughtwaves with celebrity pap and 'reality' TV. I fought hard in my teens and twenties. By the thirties, I just got tired. They have infinite resources and I'm just me.

Not much pleasure in "I told you so", but it's not impossible that could be what I end up with.

After the bottleneck die-off, humanity will either go extinct or not. My view is that we will not, but either way the course of action now for individuals should be the same, prepare for surviving the bottleneck. Even the most comprehensive preparation is no assurance of suvival, especially if there is a nuclear war, but I think it's the best one can do under these circumstances.

I'm not ready to throw in the towel. I'm not hoping for techno-fixes nor a mass event that galvanizes people, at least in America,to any meaningful action in regards to the environment. I think it has to be a snowball effect from the bottom-up. I had neighbors watching me clear the snow off the sidewalks by throwing it in my mulched front yard. Next snow, saw a neighbor down the way doing the same. Had a man going to work pass and gave me a thumbs up approving of what I was doing. I don't know if these are too small to say its catching on.I just hope for a break in the catatonic state folks are in by doing things openly.

I'm curious....has anybody checked the brains of radical fundamentalist materialists, aka the frequently humorless,uncertainty-intolerant devotees of scientism, for those brain lesions?