What good is it to escape the climate gallows if, as we walk out the jail door into the sunlight, we are greeted in the courtyard by Malthus, bearing a scythe?


On the scythe is inscribed:

If the subsistence for man that the earth affords was to be increased every twenty-five years by a quantity equal to what the whole world at present produces, this would allow the power of production in the earth to be absolutely unlimited, and its ratio of increase much greater than we can conceive that any possible exertions of mankind could make it…. yet still the power of population being a power of a superior order, the increase of the human species can only be kept commensurate to the increase of the means of subsistence by the constant operation of the strong law of necessity acting as a check upon the greater power. 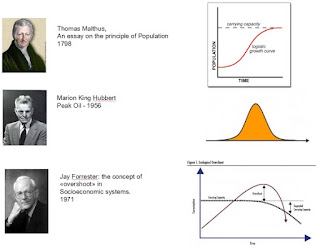 We have a friend that owns a house on a Mexican island and when, just as Ishmael’s irrepressible urge to take to the sea, we feel the need to write, we imprison our self there and look for inspiration. We become Old Testament Ishmael cast into the wilderness with his mother. We talk to the birds. God hears.

We have been doing that seasonally for more than ten years and it has produced a number of satisfying books, works of art, architectural and ecovillage designs, and even the occasional inspiration. We solved the climate crisis — discovered in a jar of dirt brought back from the Amazon. 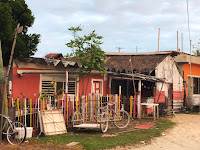 Mysteriously, the village we visited those many years ago, whose principal products were fish, leisure and hammocks, has left. In its place stands Jakarta, Mexico City, and San Juan. Blame that fellow over there in the dark shroud, Señor Malthus. He arrived a few years ago and this place has never been the same.

He was preceded by kiteboarders, birders and wild side guides leading groups of bug-eyed backpackers practicing their Spanish while snorkel-toting seniors checked off their bucket lists. There came whale shark divers whose thousand peso 3 hour boat ride was the magic wand waved over leaky fishing skiffs changing them into glistening Whalers with fiberglass sunshades above tall scout nests and 1000+ hp arrays of Yamahas bumping along at 60 knots. 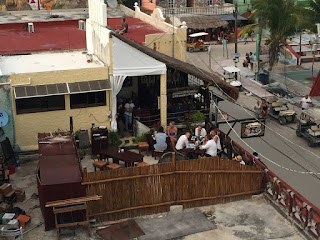 Simultaneously came splendiferous hotels and restaurants, drawing Michelin chefs from Italy, Argentina, Switzerland and France. An Expat Italian community formed, then Spanish, Brits, the Americans (North and South). Everyone had discovered paradise and were telling their friends to come and bring the dog.

Until this guy Malthus showed up.

Reckonings come like rain after the drought. The drought is what is happening now, as the weight of three-story buildings pushes into the mud foundations of this barrier island. Sidewalks trap storm surges that used to wash over and leave as quickly as they came. 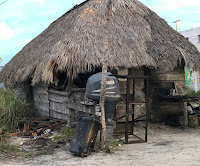 The air smells of burning plastic and rubber from the mountains of trash piling up at the dump. The sewage plant, ever-full, overflows into the lagoon when it is not backing up drains in the streets. The diesel electric plant roars so loud as to now require a great enclosing wall, and yet still can’t keep pace with the need for more light.

The water may be backing up the drains or eroding the beach, but there is never enough in the pipes from the mainland pumping stations, so it comes by barge for sale in pricey bottles, the heavy delivery trucks leaving depressions in the sand that become first puddles, then lakes, when it rains. They are deep enough to swallow the unwary.

Where once only bare feet and bicycles wandered, now rush golf cart taxis and mopeds, only to be replaced by ATVs and scooters, then again by noisy motorcycles and open Humvee-like off-road monstrosities, replete with booming PA speakers and dancing light shows. The New York minute has captured time from the hammock-weavers. 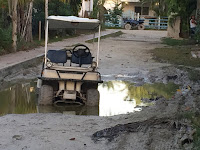 The island, a tiny part of México’s largest nature reserve and once a sacred rendezvous for sea turtles, egrets and crocodiles, is sinking under the weight of the human cargo ferried across each day from the mainland.

Mangroves, its only hurricane hedge, are felled to make room for more beach. There are each day nearly as many men raking seaweed away from high-class resorts as going out to fish, which is just as well for the fish, devoured and decimated by AI fleets of sonars, GPS and radio chatter. Chilean sea bass and Alaskan salmon fill out the menus in the sky bars. 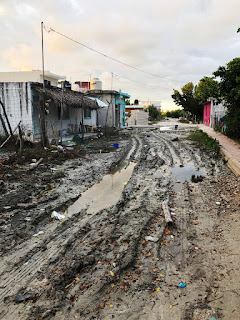 And yet, after the rain there are flowers. After the next hurricane there will be fish, and whale sharks, too. Given the ferocity of the sea, there may only be those. With no coral reef left to remake it, this speck of sand will be gone, likely within this century.

Have we no sense of limits, or are our hormones an ancient doomsday clock, tick-tock in our genetic code, programmed to end our line when we reach this moment?

We can’t say we weren’t warned by the celebrated Mr. M, but given the choice between prudence and oblivion, we chose the latter. We have free will. We will jealously take that to our graves.

Is there a way out? Sure. Birth control. Vasectomies are great sex without all the grandchildren. Will we use it? Not a chance. Apparently we’d prefer a Malthusian correction. Whether that will come in time to appease an angry climate god, well, that is the question, isn’t it?

Whether that will come in time to appease an angry climate god, well, that is the question, isn’t it?

Since it will come in the end, let us hope that it comes soon, to at least do the job of saving the climate.

“Have we no sense of limits, or are our hormones an ancient doomsday clock, tick-tock in our genetic code, programmed to end our line when we reach this moment?”

I side with those who insist that “nurture” (culture), rather than “nature” (genes, biology) which lay mainly at the causal root of the sort of madness illustrated in your post, Albert.

Both are products of a process we may rightly call “evolution”. We have a lunatic globally dominant culture because we collectively nurtured it into being by milllions, billlons ... of reckless, foolish choices. We ought to reverse that trend now — evolving a culture which reveres life.

We might begin anywhere, but I propose we begin with schools, colleges, universities.... A little truth and wisdom in education could do us some good.

The chinese officially are redirecting all national priorities to the purpose of forging an ecological civilization out of the remains of a technological one. "We are, in geological time, caught in that mere instant between knowing we are due to hit, that many will die, not knowing if we will live, and deciding what reaction we should have, and putting our foot on the brake, bracing, screaming, and … waiting …."