"Just as the cold air that precedes the arrival of Nosferatu, a deep and foreboding chill is being felt at ever lower latitudes."


North America fell into a pocket in 2017 but it was not the pocket of banksters. It fell into that in 2008.

In 2017 it found itself niftily enveloped by the ingenious pincer movements of three generals. First, the Southern attack by General Poseidon, God of the Oceans, striking at Houston before making amphibious landings on the coasts of Florida after devastating aerial attacks on Puerto Rico and the Virgin Islands. Next, the Western attack of General Hephaestus, God of Fire, reducing Santa Rosa and much of the Los Angeles foothills to ashes. Finally, the cyclone bombing invasion of the North by Moroz-Voevoda (General Winter). 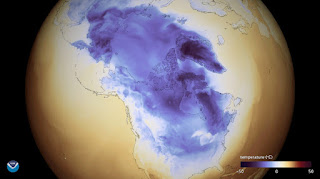 Four decades of climate data now show that the jet stream — usually referred to as the polar vortex this time of year — is weakening. Normally a freight train circling the Arctic, it has slowed to more resemble a curious python, poking its nose below the Great Lakes more frequently and for longer looks. Just as the cold air that precedes the arrival of Nosferatu, a deep and foreboding chill is being felt at ever lower latitudes.

In a bomb cyclone, the temperature difference between the two air masses leads to a steep and rapid — meteorologists often use the term “explosive” — drop in atmospheric pressure. The air starts to move and, aided by the earth’s rotation, begins to rotate. The swirling air can bring high winds and a lot of precipitation, often in the form of snow.

— Henry Fountain, Why So Cold? Climate Change May Be Part of the Answer, The New York Times (January 3, 2018)


Do we imagine that we mere mortals are any match for these titans? Did Vitalian facing Proclus at Constantinople learn nothing from Marcus Claudius Marcellus whose fleet was incinerated by the Sun at Syracuse in 212 BC? How could Hitler fail to recall the folly of Napolean’s winter attack on Moscow? 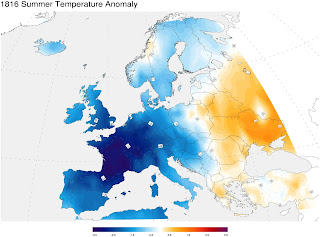 These generals we face today have been here before. They sank the Spanish Armada, gave us the 556 and 1816 years without summers, and raised the Tōhoku megatsunami to a height of 40 meters. They are secure in their invincibility.

California and Florida provide black and white contrasts in the choice of responses. California leads the nation and the world in its proactive stance to climate adaptation and mitigation. With its cap-and-trade program, launched in 2012, and its regulations targeting carbon-intensive businesses, California has become a leading example of what it looks like for governments to lean in and accept climate change. Democratic Governor Jerry Brown stole the limelight from Donald Trump’s denialist Republican emissaries to the COP-23 talks in Bonn when he pledged the state’s trillion-dollar economy would decarbonize faster than any other.

Brown also said he intends to push for even tougher greenhouse gas emission reduction goals that will be far more difficult to meet by 2030. The current goal is to reduce emissions of heat-trapping gases to 1990 levels by 2020. California’s carbon emissions law already has cost industrial polluters nearly $2.3 billion in permit fees. Starting next year, the law will include fuel distributors in the same cap-and-trade marketplace as utilities and major manufacturers.

Florida displays the opposite response. With 8,436 miles of coastline (compared to 3,427 mi for California and 3,359 mi for Texas), and 30 percent of its most popular beaches disappearing underwater by mid-century, Florida’s Republican governor Rick Scott placed a ban on uttering the words ‘climate change,’ ‘global warming’ or ‘sustainability,’ in any State publications or public remarks. According to the Miami Herald,

“The policy goes beyond semantics and has affected reports, educational efforts and public policy in a department with about 3,200 employees….”

The second-term governor has repeatedly said he is not convinced that climate change is caused by human activity, despite scientific evidence to the contrary. He has good reason to be in denial.

With just three feet of sea-level rise, more than a third of southern Florida will vanish; at six feet, more than half will be gone; if the seas rise 12 feet, South Florida will be little more than an isolated archipelago surrounded by abandoned buildings and crumbling overpasses. 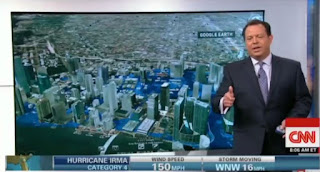 Goodell interviewed a 71-year-old climate researcher who told him, “If you live in South Florida and you’re not building a boat, you’re not facing reality.”

And yet, in 2017, the rain fell on the just and unjust alike. The fires came, the seas rose, and the ice descended.

Nature does not give a hoot for politics.