"What generally occurs when a civilization over-extends is not a complete disappearance but a rapid decline in complexity."

The collapse of the Classic Maya period, around 900 CE, is an active academic field, with many conflicting theories and a mountain of literature. While traveling in the Yucatán we are reading Arthur Demarest’s Ancient Maya: the Rise and Fall of the Rainforest Civilization (Cambridge University Press, 2004). 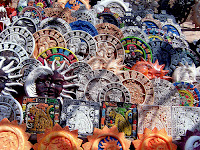 One of the terms Demarest uses to describe the period is a “theater-state.” The ruling elite, known as the K’uhul Ajaw, or Holy Lords, were relatively hands-off with respect to economics, social welfare and trade but devoted lots of resources to legitimizing their political and religious authority through monumental architecture, art, pageant, sports spectacles and warfare.

This resource misallocation — taking away from the real needs of the populace, especially in times of stress — led to swelling the elite class, enormous diversions to unproductive types of labor, depredations from unnecessary wars, resentment from disenfranchised youth who were relegated to javelin–fodder, and, of course, ecological decay — as previously elegant eco-agriculture microsystems (using 400–500 species of plants) were consolidated into monocultures and overproduced. 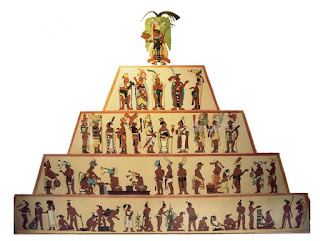 A question Demarest probes is why, in so many areas, did not Mayan leaders respond with effective corrective measures for the stresses generated by internal and external pressures they could not have failed to notice. We generally think of complex societies as problem-solving machines, in which elaborate chains of central command and control “wire” a nation to meet its goals. Yet beginning around the Eighth Century, the Holy Lords were apparently away from the control room.

Demarest thinks the problem was structural. Since the elites of the most classic Maya kingdoms did not farm or manage production of goods, the “real” economy was decentralized to community or family. The role of the Holy Lords was to manage a “false” economy that was derivative, its only marginal utility being that it gave their Kingdoms some sort of patriotic zeal or sense of exceptionalism.

When these derivatives eventually began to unravel, the Holy Lords, like mechanics with a limited set of wrenches, did what they knew best — they intensified ritual activities, built taller and more ornate temples and expensive stages, props, and costumes, and scheduled more performance rituals, wars, and feasting. Contrary to earlier results, however, these measures only prolonged or intensified the problems, led to further disenchantment, which eventually brought about whatever cataclysm dethroned them.

Successive rounds of quantitative easing had diminishing returns. The “real” economy suffered a century-long drought punctuated by severe droughts in CE 810, 860 and 910. Even the “false” economy could not help but feel reality intrude.

Today the theater state is shown in high definition and 3-D, and it resembles in its own way the grand Berlin pageants of Albert Speer as much as the scenes from Apocalypto. Mad-Men have refined the manufacture of consent, to use Chomsky’s phrase, to a fine science, and as in Classic Maya times, military recruitment is viewed as a fortunate outlet for the unemployed.
However, a “classic” period, signifying the peak of empire and also a peak in energy, productivity, and population in most cases, is never sustainable, because it is inherently unbalanced. 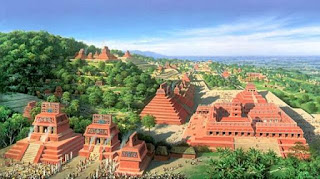 Demarest’s insight here is that we tend to characterize every civilization in terms of “preclassic, classic, and postclassic,” but we might do better to think of it as “stable and expanding,” “unstable,” and “shrinking and reconsolidating.” Preclassic Maya agriculture was exceedingly diverse, with agroforestry, household garden plots, rotational field crops, chinampas and aquaponic systems, and perhaps also novel farming techniques we have yet to learn about. So was the postclassic. We have only just recently begun to appreciate that the “slash and burn” found in many parts of the tropics was once a highly productive and ecologically sustainable biochar amendment system when practiced in the ancient ways.

The Mayan preclassic food system was only marginally regional. While trade and tribute brought in salt, chocolate, hardwoods, hard stone, luxuries, textiles, and non-perishable goods, transportation of corn or other staples was largely prohibitive from an energy efficiency standpoint. Moving corn on the back of a man 25 km requires the consumption of 16% of the caloric value of the load. Transport from 100 km would have cost a third of the load in expended caloric energy. Demarest wrote, “Such high transport costs might have been maintained by a few Mayan cities at their peak, but more generally Mayan subsistence economies and markets were probably based on an area of about 20 to 30 km — a day of travel from the major center and its periodic markets.”

Joseph Tainter’s famous 1988 analysis of civilizational collapses argues that what generally occurs when a civilization over-extends is not a complete disappearance but a rapid decline in complexity. Axiomatically, it can be said that the instability experienced at the peak of a culture is a function of over-complexity.

While this might be true of the Maya in some ways, in other respects that analysis fails to satisfy. While the theater state of the Holy Lords reached a peak complexity and then declined, a different type of state followed that increased in complexity over what had existed in the classic period. The end of the theater state led to the cessation of monumental architecture and the disappearance of high status exotic goods and ornaments, but good riddance.

At the same time, although at different times and speeds in different regions, there was a flowering and transformation to the new order. Extensive ecological, archaeological, and settlement pattern studies have found a resurgence of complex agricultural regimes that were well adapted to population levels with no indications of nutritional stress. When the curtains were drawn on the theater state, the health and welfare of the people improved. With the loss of simple monoculture and central authority and the diffusion of complex microfarming diversity and decentralized councils, the new order recaptured stability.

What followed in the postclassic period were a diffusion of distinctive new variants of the classic culture, with strange costumes, long hairstyles, experimentation with new legitimating ideologies, and unusual features in buildings, sculpture and ceramics (e.g.: ubiquitous serpents, brightly colored murals, and the psychedelic temple complex of Tulum).

The Maya that flourish in the Guatemalan highlands and Yucatán today are as populous and even more vigorous economically than during the classic theater state, but they do not generate anything like the art and architecture of their predecessors from 1000 years ago. They don’t need to.
Demarest observed,

For at least 6000 years, the hallmarks of the Western tradition have been linear concepts of time, monocultural agricultural systems, overproduction and exchange of surplus in full-market economies, technology-driven development, a long history of attempts to separate religious and political authority, and judgmental Gods concerned with individual, personal moral conduct. As we learn from the Maya, none of these traits is universal, none of them was characteristic of classic Maya civilization, and none of them is critical to the fluorescence of high civilization.

Too often scholars and the public viewed non-Western societies with an implicit, unconscious condescension. We tend to regard their political and economic systems as incomplete (“less evolved”) versions of our own. Ideology and cosmetology are viewed as detailed esoteric collections of ideas fascinating for scholarly study and public imagination. We also tend to emphasize aspects of ancient religion that attempted control of nature as “primitive science.” In so doing, we ignore the personal and philosophical challenges of experiencing another worldview — an alternative perspective on existence and death.

From an openly philosophical, subjective, and postmodern perspective of our society and its science, we are no wiser than the Maya priests and shamans in the face of these mysteries. For that reason we can study the ancient Maya, and other non-Western cultures, as sources of alternative views of reality and of contemplation of our own culturally ingrained worldviews. You can view the classic Maya as a less developed society trying to control the forces of nature and to survive economically. Or instead, they can be regarded as fellow travelers who simply chose a different path through the darkness.

The pre- and postclassic system of mimicking the diversity and dispersion of the forest allowed the Maya to maintain populations in the millions in the Yucatán for over 1500 years without destroying a rich but fragile tropical environment and biodiversity. They are still here — still engaged in that work. That offers hope for us all.

This is an update of an essay we wrote six years ago from the Fourth World Congress on Ecological Restoration in Mérida, México. It was published as part of the collection Pour Evian on Your Radishes in 2014.