"Out of the torrents emerging through the massive hashing power, the torus of a new heart grows."

Barack Obama may be remembered for many things -- becoming the first Hawaiian President of the United States, withdrawing allied forces from epic military disaster in the Muslim World, dismantling market moral hazard, and reopening Cuba to the mob -- but his most lasting legacy may be still to come.

There is a revolution quietly taking shape in Air Force joystick cubicles near Las Vegas, in the Horn of Africa, the Tribal Territories of Pakistan, the DMZ of Korea, and in secret sites in Tel Aviv and Kiev. Autonomous Robot drones are evolving capability to select and execute targets of opportunity.

The word robot comes from the Czech word robota meaning forced labor, and is generally attributed to a 1924 play by Karel Capek. The idea that men will build machines that may all too easily destroy their creators runs back through Mary Shelley’s Frankenstein and Greek mythology. We have a deeply engrained wariness of anything that might knock us out of our place as top-predator in the food chain. And yet, we ignore these death machines we are building, seeing nothing more threatening than a good movie script.

The median response from Artificial Intelligence programmers when asked when AI-droids will have better processing power than humans is 2030. Put another way, the coming generations of flying robots that kill their human prey from 10,000 feet up will be smarter than people in about 15 years, barring total collapse of petroleum civilization, or maybe even because of it.

Removing Asimov's three laws from the kernel of killer robot CPUs is a death wish. Actually, Asimov wrote four laws. The fourth or zeroth law that outranked the others:


0. A robot may not harm humanity, or, by inaction, allow humanity to come to harm.

In the midst of the 2008 financial meltdown, the open source protocol for a public asset ledger called the blockchain was put forward. The core of this invention was the idea of decentralized consensus on a large scale, an app version of Occupy, if you will.

From the blockchain emerged BitCoin. BitCoin was modeled on the gold standard for valuing transportable wealth – there was a finite supply but it could be "mined" to enlarge what was available for transactions by users. New gold went to miners who solved mathematical problems. The Cyberpunk community extolled its virtues:

"Psychopathic tendencies as the side effect of extreme individuality can be brought into balance within a new social contract, enforced by Satoshi’s perfect market with its equilibrium of supply and demand. Characteristics that are often considered negative in society such as risk taking, calculated selfish acts and profit motives can now be channeled to serve a larger shared vision of a more free society.

"Instead of arms races and financial wars, with bitcoin the competition for solving a mathematical problem helps to achieve a global level security infrastructure. This new flow of currency has the potential to end financial apartheid and begin serving the unbanked and underbanked that have been excluded from the current financial system. It can free those who are restrained by rent-seekers and subjugated to financial colonization. Out of the torrents emerging through the massive hashing power, the torus of a new heart grows and with every beat expands our collective goodwill to flow throughout the entire network."

Anytime someone comes on to us like a Snake Oil salesman, we check to make sure we still have our wallet, even if that wallet is now an app on our wristwatch. 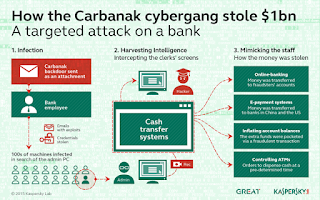 Actually, this exuberance is immediately suspect in the case of bitcoin because "free" coins will gravitate towards whomever has the most computing power, leaving a 99 percent of lesser power users to purchase from the 1 percent who get theirs for "free." This is not a paradigm shift, it merely shifts the elite class (temporarily) from banksters to any hackers with supercomputer access and an ability to pay the electric bill.


The top coin miners have a Red Queen problem. In the Queen’s race in Alice in Wonderland, everyone runs faster and faster and no-one gets ahead. In coin mining, more and more computing power is required to solve the mathematical problems. The software underpinning the network reacts to successful miners by elevating difficulty, so hackers add even more computing power, and so on. 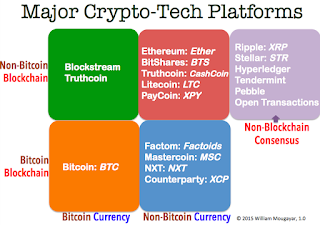 As this cycle speeds, it takes more datacenter CPU heat, and more cooling electricity, to mine a bitcoin. The computational power of the bitcoin mining network surpassed the world's top 500 supercomputers in 2013. On average, for every megawatt of electricity spent mining bitcoins, 0.65 tons (1300lbs) of CO2 are released into the atmosphere. Dave Carlson, founder of Megabigpower, a mining datacentre in Washington state, figures he spends 240 kWh and releases 312 lbs of CO2 for each coin he mines. Worldwide, bitcoin mining generates about 25 tons CO2 per hour, or 219,000 tons per year. This is not virtual CO2. This is real CO2.

Can the blockchain prevent HSBC’s illegal money laundering for Mexican drug cartels? No. It makes it easier. Nigeria is already becoming a blockchain haven for Citibank, with ambitions to colonize all of payments space. If it seems oddly ironic to speak of Nigeria as a colonial power, just remember how quick its entrepreneurs were to colonize and monetize spam.

Does Citibank have any compunction about employing the fastest available processing power to (a) game bitcoin mining; (b) replace devalued bitcoins with its own CitiCoin; and (c) unleash predatory trading algorithms from the blockchain that operate at warp speed or even employ quantum mechanics to execute trades before they are even imagined by the trading partners? 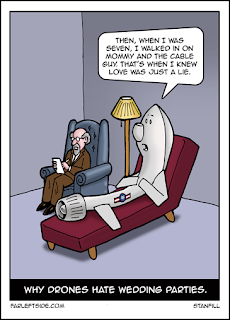 The Cyberpunk response is that blockchain transparency will flush the bandit algorithms. But one man's bandit is another's freedom fighter, layering, spoofing, and generating wash trades. The sheriff (SEC, FIRA, FBI, or a State or US Attorney) is outgunned and doesn't usually want to do anything that might jeopardize his/her pension, or the party in power.

In his White House War Room, The Commander-in-Chief is assured that if we don't do this first, our rivals will. And so we drift, towards unparalleled catastrophe.

Above, circling the heavens, are autonomous killer drones that keep getting smarter by the year. In a world where all things connected to the Internet are hackable, so too are they.

Albert, You are my favorite blogger and guiding light on a whole range of subjects. You stepped onto my former turf in talking about drones, so I thought I would point out a factual issue in this post. As far as I know, and your link reference indicates, there are no drones that currently conduct autonomous targeting, so Obama is not culpable of permitting it on his watch. The slippery slope of autonomous flight has been achieved, so targeting may not be too far in the future, leading to the out of control possibilities you describe.

Robert, I should have checked with you before I posted. Thanks for correcting me. One needs to distinguish capability from active deployment. The authorization for UAVs to pull their own triggers, that I attributed to POTUS, if it exists, would likely not be a matter of public record but let us assume the Rubicon is still uncrossed. I am forced to backtrack from condemnation of a decision to the condemnation of a preparation.

In November of 2012, Human Rights Watch released ‘Losing humanity: the case against killer robots’, describing the inherent risks associated with completely removing controllers from the kill-decision-making loop. V K Saxena's 2013 book, The Amazing Growth and Journey of UAV's and Ballastic Missile Defence, predicted that "4th Generation UAVs will come on the scene and will be more robotic than merely unmanned… taking kill decisions unilaterally."

I would argue the "kill decision" is already somewhat autonomous, with POTUS going over a target list in the White House War Room and word moving down the chain to a distant human actor who carries out the order. Once the decision has been made, whether it is implemented by man or machine is barely distinguishable. So the slope is already very slippery.

While I speculate that the allure of greater power makes fully autonomous UAVs inevitable, others say "It’s hard to imagine that we could ever be confident enough to allow technology to cross that thin red line." http://thediplomat.com/2012/10/why-killing-should-remain-a-human-enterprise/

My point about Pandora's Box is that in due course these AI platforms will fall under control of, or be launched by, Non-State Actors. Clint Arizmendi, writing for the Australian Strategic Policy Institute in 2013 said, "In the above scenario, NSAs could literally ‘launch and forget’. Finding out if they were successful in their attack would be merely a matter of monitoring social networking and media sites…"

July 27: More than 1,000 leading artificial intelligence (AI) and robotics researchers and others, including Stephen Hawking and Elon Musk, just signed and published an open letter from the Future of Life Institute (FLI) today calling for a ban on offensive autonomous weapons. FLI defines “autonomous weapons” as those that select and engage targets without human intervention. http://www.kurzweilai.net/ai-and-robotics-researchers-call-for-global-ban-on-autonomous-weapons

"If any major military power pushes ahead with AI weapon development, a global arms race is virtually inevitable," they said.

Mine effectively with your computer or smartphone.

Generate the most profit automining coins with the highest rates.