Cancunhagen 1.0: Revenge on the Danes

"If the average American used only as much energy per year as the average European, America would be exporting oil, not importing it. Only our insistence on clinging to the dysfunctional lifestyles of an age that is passing away keeps such an obviously constructive goal off the table." — John Michael Greer


So, in our last post we gave the starting point of the negotiations. It would take some masterful negotiator, a combination of Mohandas Gandhi and KKR’s Henry Kravis, to reach any meaningful denouement. Such a master appeared in the unlikely guise of the President of the host country. 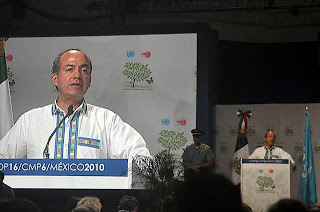 We have never been especially fond of Felipe de Jesus Calderon Hinojosa, its true. In the course of the first two weeks of December, however, our opinion reversed. Before the Cancún Summit we saw him as a Bush toadie who ascended to power over the populist candidate and rightful president, Andrés Manuel López Obrador through a Diebold-rigged election.

But, during the Summit, we watched slack-jawed as he opened the doors to civil society and welcomed all to attend the discussions. He held stakeholder sessions to listen to the views of science, development organizations working in the field, the media, indigenous rights groups, religious groups, and sub-governmental agencies. Everyone had access. Guayaberas replaced suits; “tú” replaced “usted” or “Excellency;” his casa was our casa.

In Copenhagen we had been forced to stand in blowing snow for hours to get daily passes only to find the doors to meeting rooms blocked by plainclothes security with earbuds and bulging armpits. In Cancún, if you jumped through a few months of hoops to get credentialed, you could observe almost any meeting, and in many of them you were offered the microphone and translator services, if you needed to speak. Contrary to the chants of the protestors, the UN did not silence civil society.

The effect this had was to bring in out-of-the-box thinking that was the only possible way to break through the numerous loggerheads.

Peter Wood of Australian National University told delegates in one meeting that the impasse boiled down to how nations deal with the free rider incentive. No-one wants to jeopardize their economy by being the first to act, or by acting alone. But, Wood said, “Some game theory mechanisms based on countries either matching each others’ commitments or subsidizing each others’ reductions have game theory solutions: fully cooperative outcomes.” 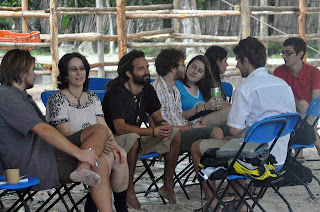 John Michael Greer has said, “If the average American used only as much energy per year as the average European, America would be exporting oil, not importing it. Only our insistence on clinging to the dysfunctional lifestyles of an age that is passing away keeps such an obviously constructive goal off the table.”

In a recent analysis published in Foreign Affairs and reviewed in Scientific American on-line, Prof. Bruce Bueno de Mesquita of NYU argues that political leaders will, by and large, act on what keeps them in power or helps them to get re-elected, not that which protects the planet. Even promising their constituents light economic pain now for understood benefits years into the future isn’t a winning formula.

“One way that it could work is to link cooperation on climate change with cooperation on other issues, such as trade,” argued Wood. “If a country introduces a carbon price, it may also want to introduce a ‘border tax adjustment’ that levies a carbon price on emissions-intensive imported goods.” That is also a strategy championed by James Hansen following a recent trip to China. According to Hansen, China may find economic advantage in going carbon-negative and could, under the rules of the WTO, impose import tariffs on countries like Australia, the US and Canada that were less environmentally responsible.

However, what game theorists failed to take into account was the latest findings in cognitive neuroscience. Not coincidentally, that is precisely the kind of knowledge that permaculturists, transition towns affiliates and the Global Ecovillage Network (GEN) brought to the discussion.

Research by behavioralists Felix Warneken and Michael Tomasello indicates that toddlers as young as 18 months instinctively behave altruistically. When we contemplate violence done to others we activate the same regions in our brains that fire up when mothers gaze at their children. Caring for strangers is in-bred. When we help others, pleasure centers in our brains light up like Christmas trees. There is no self-other. We are our brothers’ keepers.

Most game theorists begin with the assumption that humans are hardwired to be aggressive and selfish, and politicians seek only self-interest. Ecovillagers and Transition Towners know from actual experience that people not only can behave well and nobly, but can take deep pleasure in doing so, a pleasure so intense it suggests that an unspoken, unmet appetite for fulfilling work and sharing community lies just below the surface of our collective angst.

Some of us even yearn for quick collapse, to get past the inevitable and back to a recognition of communitas. Civilizational collapse is not always as bad as it is made out to be. Ask the Maya.

At the Communications Forum we learned that 64% of the delegates believed the unwillingness to risk economic or political damage at home was the greatest barrier to reaching agreement. Only 20% think it is due to skepticism of the science. Of those representing industrial countries, 69% were unwilling to jeopardize continued economic growth; 59% in developing countries. 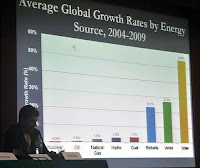 As many of the submissions from civil society made clear, however, excellent studies in various countries and regions already show profitable means to achieve 40% aggregate reductions from 1990 levels for 2020. Some groups, like Climate Action Network, Centre for Alternative Technology and European Climate Foundation, have shown how we can transition to a zero carbon economy for developed countries by 2050 or even 2030. Dubious technologies like clean coal and nuclear can be pursued by countries inviting their own financial ruin, but most will likely choose to adopt renewables targets like China’s. China’s carbon goal, without precondition of treaty or reciprocity by others, is 15% primary energy from solar/renewables by 2020 and an increase in forest cover by 150,000 square miles.

A declaration signed by 150,000 Chinese “members of the public” endorsed that national commitment, even though it recognized that cutting GHG by 40-45% of 2005 levels by 2020 would entail real changes in lifestyle options. Note however that China’s pledge is -40-45% per unit of GDP. That “per unit of GDP” rider is a significant qualifier since China’s GDP grows 8-10% annually. If the math seems a bit opaque, that is no accident. 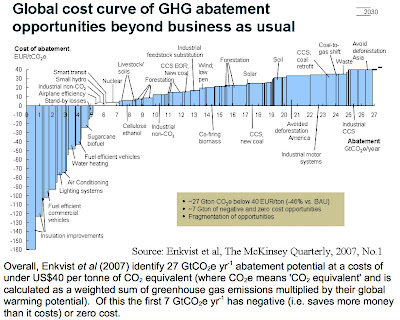 South Korea’s Green Growth Initiative is groundbreaking in several ways: it has broad bipartisan and public support, it is being implemented with detailed and forceful legislation; and despite early opposition from energy-intensive sectors such as steel and cement, it has been embraced by mainstream industry. Firms like Hyundai and Samsung have implemented their own “green growth” strategies, including entering into new business areas such as solar energy, wind power, electric vehicles, and zero-emission factories.

Most impressive about South Korea’s initiative is the “just-do-it” philosophy that drives it. The country’s leaders are frustrated by the maddeningly slow and ideological character of the climate negotiations. They are firmly — and accurately — convinced that the global economy is no longer sustainable on its current track, and that those who choose to seize the “early mover” advantage and pioneer low-carbon, green industries will strengthen their economies and create millions of jobs. This was a repeating theme hammered in events featuring “Green Tech” displays, the CEO of WalMart and L. Hunter Lovins. We attended a Worldwatch sponsored event titled “Low-Carbon Energy Roadmaps: Insights from Those Who Are Leading the Way,” which, while pretty lame in its ambitions and case studies, showed how being green is, as a practical matter, the only financially sound option for the degrowth economic milieu. 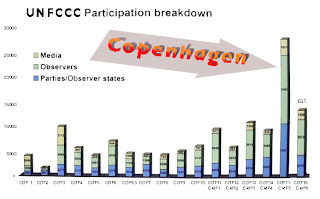 Other good ideas, like Ross Jackson’s idea for an international carbon board or the carbon maintenance fee concept developed by Richard Douthwaite at FEASTA were also prominently mentioned at the unveiling of a cross-cutting study being tasked to the World Resources Institute by UNEP. These outside works, involving financial reforms, fee-bates, incentives and tariffs, and many other ideas, will now come into greater discussion in future COPs, as they are laid side-by-side and looked at in scientific, political and economic contexts.

That is all thanks to the open and transparent negotiations process created and stewarded by President Calderon. Danish President Rassmussen, eat your heart out.