"We simply must balance our demand for energy with our rapidly shrinking resources. By acting now, we can control our future instead of letting the future control us. "

Since the early two thousand oughts we pessimistas have been trying to discern the shape of the backside of Mr. Hubbert’s curve. John Michael Greer has made a strong case for catabolic collapse, which could be described as a stair-step down from the present peak, punctuated by precipitous drops (the 147-dollar oil spike; the Lehman default; the ARMs race) and level treads (“Green Shoots,” the “Morning in America” phase we are currently re-hallucinating).

Catabolic collapse may describe the micro-view, but in coming decades the decline curve has a number, and whether that number is 2 (the grade of the uphill climb we traversed over the past 100 years) or 7 (halving every ten years) matters.

At the Local Futures conference in Michigan on November 14, Richard Douthwaite joined others, myself included, in predicting something in the 7 to 9 range, which places him in the pessimista camp, whether he likes the association or not. A splendid analysis published November 23 at the Oil Drum by Tony “ace” Erikson follows a more benign 3 degree slope (1.6 to 2.4 mbd/a), and offers a very nifty view of the next few years. I have taken the liberty of combining ace’s charts with an overlaying fabric of possible socio-political reactions.

Here is the projected decline slope, derived by subtracting new supplies now being developed from anticipated depletion of existing supply, with an overlay of expected prices: 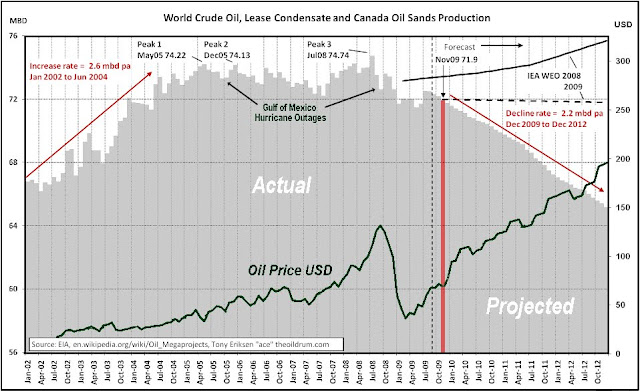 Here is the projection of just the new additions, which typically take 8 to 10 years to develop after discovery, assuming the product price justifies the expense to develop (which it does in this case), together with a possible socio-political overlay for the United States. 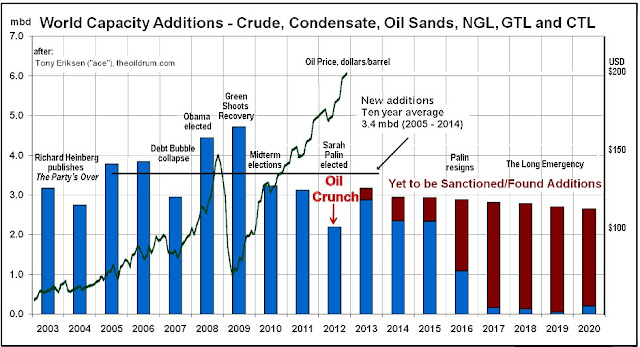 Going by these charts it is safe to say that the next few years should be very lively. Stick around.