On the passing of a friend

This morning I tried to sleep until dawn but I couldn't. I tossed and turned and finally just got up. It was still dark but the sky was starting to gather light. I took my bicycle and rode out in the chilly dawn for about ten miles, and paused at the edge of a large field to watch the sun come up. At 5:25 am local time, Thomas Berry passed from this world. He left lives behind him here, and among them there is yet hope.

John Lane, Appalachian Voices: "When you were a child growing up in North Carolina, there were less than two billion humans on the planet. And as predicted, the world’s population rose to 6.5 billion in about twenty five years. This all happening in your lifetime. The South is the fastest growing region in the country. Can the South survive? Can we, as Southerners, survive this population boom?"

Thomas Berry: "I don’t guess I think we can. It would be very difficult to survive with that much population. It goes against all odds with regard to carrying capacity. And it’s here that religion has been at fault. Especially the Catholic religion--which has failed extensively in not paying attention to the decline of the natural world, and in this way it’s losing its own foundations, because the biblical world is thoroughly cosmological. Rituals are cosmological. They presuppose the universe. I was in a monastery for ten years. I didn’t even come home to Greensboro, where my family resided, during that time--between the ages of twenty to thirty. In the monastery, we’d celebrate dawn with prayers and meditations. And we’d celebrate the mid-day, and celebrate the early evening. At vespers, we’d celebrate the early evening, and then the late evening, which was wonderful! Then I’d get up at two-o’clock in the morning and I’d have these experiences with hymns that would be sung according to the time of day and seasons of the year. The whole of that monastic literature was woven into the cosmological cycle. The scriptures, the book-of-songs was thoroughly cosmological. In the normal Catholic world, a person cannot even study theology, or philosophy, or about the universe. This is a part of the comprehensive failure. To recover, we need new laws. We need new religions. New economics and new education. All four. None of the four can do it by itself." 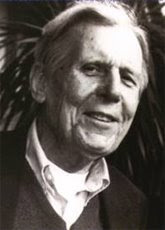 Reverend Fr. Thomas Berry C.P., cultural historian and ecotheologian (although "geologian" or “Earth scholar” were his preferred descriptors) passed today. He was 94. I met him at an early Bioregional Congress, where he came, like me, to mingle and learn.

It is told that his sense of "the natural world in its numinous presence" came to him at the age of 11 when he discovered a new meadow on the outskirts of the town to which his family had just moved. "The field was covered with white lilies rising above the thick grass," he said. "A magic moment, this experience gave to my life something that seems to explain my thinking at a more profound level than almost any other experience I can remember."

It was not only the lilies, he said. "It was the singing of the crickets and the woodlands in the distance and the clouds in the clear sky. … This early experience has remained with me ever since as the basic determinant of my sense of reality and values. Whatever fosters this meadow is good. What does harm to this meadow is not good." By extension, he said, "a good economic, or political, or educational system is one that would preserve that meadow and a good religion would reveal the deeper experience of that meadow and how it came into being."

"We have a wonderful idea of God because we have always lived on a planet that is chock-full, every nook and cranny, with marvels and mysteries, dark beauty, happy encounters and splendid landscapes. How could we picture God in our heads as an ever fresh and creative daybreak, as a compassionate father or nurturing mother, as a wonder-counselor if we had never experienced these qualities in the people, land and life around us? What kind of God would we pray to if we lived on the bleak surface of the moon? We are literally killing off our religious imagination when we destroy the natural world."

Thank you Al, I had not heard the news. I lament the passing of one who "gets it" and his comments reminded me of something I read recently by Elisabet Sahtouris;
"there is no better governmental model or educational model or
even spiritual/ethical model than the rainforest or any other mature, healthy ecosystem
in which every species is fully employed, all work cooperatively while recycling all of
their resources, and all products and services are distributed in such a way that every
species remains healthy. That is sustainability."