Our National Pastime: The Great Dick Cheney Psyche Out

"Enhanced interrogation was reverse-engineered to create a false linkage between Iraq, Al Qaeda and the events of 9/11. Just ask yourself — why would anyone want to do that?"

In a recent interview with the C-realm, petrocollapse author James Howard Kunstler said he was allergic to conspiracy theories. While we are sympathetic, we find it hard to draw a firm line between conspiracy rants, news shows, and intelligence briefings these days. Maybe it is the effect Wikipedia has had on the study of history, or perhaps it is the blurring of the line between popular culture infotainment and the more serious work of running countries, economies, and wars.

Just now the talking heads in the mediasphere are all abuzz: why hasn’t Dick Cheney clammed up and disappeared into the woodwork like Bush? He is expending great energy to psyche us all out. Why? To what end?

The popular storyline from the left (The Nation, Slate, MSNBC, Air America, Sirius-Left) is that Cheney is filling the void on the Republican right wing and vying with Limbaugh for party boss. That nearly 60% of Republicans wish he would just disappear for a couple of years makes it fun fodder for Saturday Night Live. 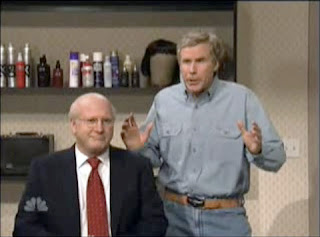 The bobblehead thread on the right, when it can be coalesced for longer than one news cycle, is that (a) Cheney is right, Obama is undermining national security, torture works, waterboarding is not torture, and extremism in defense of liberty is … whatever; or (b) Cheney is wrong, but well-reasoned, and good people can disagree, nothing amiss here, these are not the ones we are looking for, move along.

But there is a darker side here, and it traces to 9/11, the quest for control of oil, and the New American Century and Empire Strikes Back meta-goals involving dominance and hegemony.

What we know from the Congressional hearings this week and from other sources contradicts Dick’s talking points pretty definitively. To paraphrase George Washington’s blog:
Posted by Albert Bates at 7:55 PM

If you follow his reasoning, Senator Graham's logic depends on folks being guilty of witchcraft.