We read Nate Hagens recently reposted piece from 2007 on The Oil Drum re: firewood. Hagens ran some interesting calculations. What if everyone got woodstoves? How long before peak forest?

In 2002, the forested area of the United States contained 856,000,000,000 cubic feet of tree volume, of which 364,000,000,000 cf were hardwoods. (This is the forest capital). (Due to larger amounts of creosote and much lower wood fiber density in softwoods, they are not suitable for conventional firewood and I assumed are not used for heating –in a more advanced analysis this assumption could be relaxed as people could harvest softwoods and replant with hardwoods at least to some extent and/or install external wood burners).

The current annual volume growth is 10.1 billion cubic feet annually (or about 2.5%). Existing usage rate is 5.7 billion cubic feet with an annual mortality rate of 2.7 billion cubic feet. (Interestingly, the mortality rate was at a 50 year high and the USFS admit they do not know the reason for it). For ease of calculation let’s be aggressive and assume that humans can access all of the dead wood for burning. We then have 4.4 bcf of annual growth of potential firewood that is not otherwise being utilized for lumber, electricity or current home heating. At 128 cubic feet per cord, this equates to approximately 34.7 million (more) cords of wood that can be accessed sustainably, without dipping into the forest ‘capital’. If we discontinue other current market uses for the wood we would have 10.1 billion cf or 78.9 million cords of potential firewood per year.

Freshly cut wood has over 60% moisture and therefore takes much more effort to release the energy in the wood fibers. Seasoned wood approaches 20% moisture content and releases about 6,400 BTUs per pound of wood. (Pure bone-dry wood tops 8,000 BTUs per pound but is not practical for home use). Almost all wood types create the same amount of BTUs per pound (6,400), but depending on their individual densities and other properties, differ in how many pounds make up 1 cord.

This analysis assumes one cord of wood typically is about 2400 pounds. We then arrive at 2,400 X 6,400 BTUs =15,360,000 BTUs per cord. Therefore, in the 52 US states, we have 34.7 million cords of annual volume growth of wood available times 15.36 million BTUs per cord => 533 Trillion BTUs that can be presently be accessed sustainably from hardwoods. (If we eschew all other forest products, this number roughly doubles, and if we include softwoods, it roughly doubles again)

[This compares to 7000 Trillion BTUs contributed by natural gas for home heating at present. - ab] 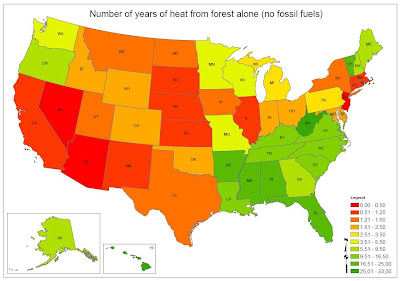 Last week we had a brief warm spell, and we were back working on the wood pile, with plenty to meditate on. Good thing we did. The fresh snow this morning makes it hard to find the chopping block (see our Facebook wall for more photos). One of the Oil Drum commenters, Don in Maine, remembered (and here we reverse his paragraph order): 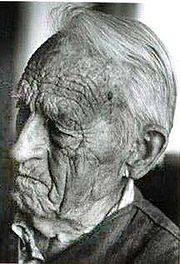 Scott Nearing, when he went to friends to have dinner always wanted a spell at the wood pile first, than some home grown food and dandelion wine, and talk of economics into the wee hours.

In a society that answers every problem with a pill, splitting wood is zen. Your anger, your frustration, your doubts are gone. The body kicks in and the mind gets the rest it needs. I never come in from the wood yard in a bad mood, I look back outside and what I see is that I have been highly productive. So many of the ills some people face actually seem much less of a problem with some fresh air and work. Depression is a big one, anxiety another, hard to be either when you made a big pile of split wood, raised a good sweat, and are tired.

Mostly you end up hungry.

We would also add that arm exercise is much more exhausting than leg exercise. More adrenalin is released, your heart beats more rapidly and beats harder. But, after that cardio-flush, you have elevated levels of the brain chemicals that lower anxiety.

Exercise sends norepinephrine to brain regions involved in the body's stress response, according to work being done at the Univ. of Georgia. Norepinephrine is particularly interesting to researchers because 50 percent of the brain's supply is produced in the locus coeruleus, a brain area that connects most of the other regions involved in emotional and stress responses. The chemical is also thought to play a major role in modulating the action of other, more prevalent, neurotransmitters. 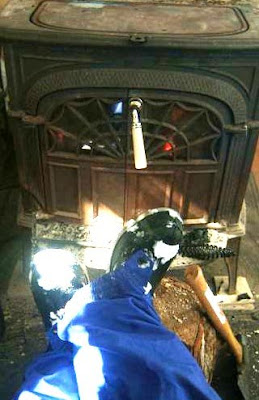 Ahh! This explains why, after a rotten day at the salt mine, the first things I reach for when I get home is my hammer and wedges. Enlightening post!

A couple of provisos here, on what is otherwise a slightly worrying article:

1) It assumes that we would need to use the same amount of heat energy to heat homes, but bear in mind that the average American home is heated *far* too much, and in far too many places. You could easily halve the amount of heat energy required simply by reducing the temperature by 5-6 degrees C (probably more, actually). We are currently at 15C.

2) It assumes the current extent of forest, but if civilization were to collapse, or at least decline terminally (the better option) then the desire to deforest in order to provide agricultural land, paper and non-essential wooden goods would also decline, creating the conditions for rapid reafforestation.

3) If, as I suspect, Industrial Civilization does collapse in major pockets - particularly inner cities - then there aren't going to be so many people around. It's not nice, but it's probably gonna happen.

It would be interesting to see that same map if everyone were using mass heaters and rocket stoves. I bet it would look a lot greener.
Keith Johnson
http://kjpermaculture.blogspot.com/
BTW, I just added links to Keith Farnish's books and webpages. Thanks, Keith

I noticed, on the map, that Montana, where I live and where extensive commerical logging is taking place, has only about 1 year of wood heat in it. It takes 60 plus years for a tree to grow to maturity in MT and then it is only about 6-8" in diameter. Also, all we have is softwoods (conifers) and that is about all that would grow in this cold, dry climate, yet Montana and Idaho have the majority of the west's forests and USFS land. A mere 30 years ago, the average diameter of MT's trees was 12" (they were 120 year old trees), now they are 6-8", so I think harvesting is at its maximum. Sustainable tree harvesting in the west means that for every 60-80 trees only one can be harvested in that year.
The trees here are dying due to a pine beetle and I believe the pine beetle is more prevalent than in the past because of unhealthy living conditions for the trees. Logging and thinning too far apart allow for evaporation of the soil. Past years of drought have also contributed to poor tree health. Also forest fires in the last 10 years have burnt hundreds of thousands of acres of trees. Some of these dead trees have been harvested, but a timber sale in a burnt area usually means that the green trees are taken out, in case another fire comes along! Most of the dead trees, plus limbs big enough to burn as fuel are burned as slash! Such waste!
I agree that wood chopping is great Zen, and great therapy. I used to do it myslef, but I'd like to see alternative forms of heat -- thickly insulated houses such as straw bale with solar heat and/or geothermal, and cutting back use. Also, more efficient wood burning could be employed by building the Russian or Finnish stove. Trees are needed as building material, also, even if using straw bale (roof and window/door frames -- bamboo doesn't grow up north)Thanks!
Karen

Hey Albert!
Great analysis. Let us hope we do not get to the place where 350,000,000 Americans need to heat with firewood. Around EntropyPawsed here in West Virginia, it seems most of us heat with firewood. Additionally, lots of hardwoods were being cut and leaving the area as the primary input in building materials. However, with the current economic recession, this has thankfully largely abated, and we are hopefully left with predominately intact forests.

Charles Little in "The Dying of the Trees (1995)" maintains that the entire Eastern forest is dying. We do not perceive it through our normal sensory apparatus probably due to the extended time frame of the death. Without trees, can humans survive?

It has been apparent to me for some time now that there are too many of us homo sapiens sapiens, by a factor of many times. Can we get to sustainable numbers in a rational and peaceful way? Or will we be subject to the ways of Nature? Stay tuned