At the last US presidential election in 2004 I researched the subject of gasoline prices and discovered that every election year a Bush was in the White House the price of gasoline peaked in early July and then declined sharply to Election Day, rebounding gradually after that. Every year a Bush was outside but wanting to get into the White House, the opposite happened. There is one exception to this, which came in 2004, when Bush-II was trying to defeat John Kerry and prices should have come down but did not.

Until now I have attributed the pattern to the relationship between the House of Bush and the House of Saud. It is a little more nuanced than that, because who really sets prices is the refineries, and although it helps to have more crude in the pipeline when you are taking prices down, that has not always been the case in election years. If you are into conspiracy theories, you might say Pappy Bush and his close advisor, James A. Baker III, strongly influence the management of the refineries and hence are in a position to set prices, regardless of supply and demand. See, for instance, the client list of Baker's Houston law firm. Of course, you would never be able to prove that.

The lone exception year that broke the pattern can be explained by peak oil. By 2004 the world was lurching into a shortfall in crude inventories, demand was soaring in China, Venezuela was rumbling, and the Saudis were miffed over the worsening Palestinian situation (similar to the position OPEC found itself in, after the US peaked and they could turn the screws on Richard Nixon in 1973 in response to the Yom Kippur/Ramadan War, precipitating a global crisis at the gas pumps, which abated only when Henry Kissinger got the Israelis to promise to give up the Golan Heights).

However, if the explanation is credible, that same exception should apply this year. One glance at refinery crude inventories (This Week In Petroleum from the EIA) — down 25.8 percent from this time last year — and you can see the tension between supply and demand has never been greater. At the peak of Hurricane Gustav preparations, shut-in Gulf of Mexico crude production totaled approximately 100 percent of the U.S. Gulf crude production (1.3 million barrels per day). Last week 14 Gulf refineries were shut down by the evacuations. As of the end of this week, shut-in Gulf of Mexico crude production still totals 1.25 million barrels per day and 13 of those 14 refineries remain closed. Hurricane Ike is a Category 4 on a westerly track into the Gulf, skirting the north coast of Cuba on this coming Monday.

Saudi production is little changed and Mexico is in steep decline (down some 30% year-over-year at their Cantarell field, as I reported here 2 weeks ago). 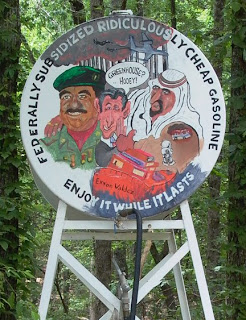 Based on all these tea leaves, back in July I went out and re-filled my 550-gallon storage tank with regular unleaded. Dumbest purchase I ever made. If I had waited just one week I would have seen the change in price direction and waited. I could just not imagine the election year pattern re-establishing. So far that lack of imagination has cost me $637.68.

So how is it that gasoline peaked in early July and is now declining sharply in the march towards Election Day, and crude on the world markets just closed the week at $104.58? The U.S. average retail price for regular gasoline fell for the eighth week in a row. The West Coast price fell for the tenth week in a row. I don't think either the Beijing Olympics or demand destruction in the US can explain that sudden, unpredicted fall.

On my transoceanic flight today they were screening Recount, the HBO movie about the 2000 election. The answer was right there in front of me: Bush Senior’s go-to-guy, Jim Baker. 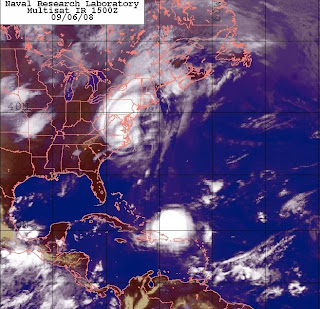 I think the only reasonable explanation is that the House of Bush decided to anoint John McCain as Bush-III and now has put the nation's wholesale gas prices on a Labor Day special, against the financial interests of refinery owners (who, after all, are making record profits and can afford to light their cigars with million-dollar bills). But see Tom Whipple's caution about refinery stocks. If you push prices down, you push demand back up in the USA. If you are teetering on your front-end inventories to begin with, what you get from that is shortages. That won't be good for McCain if it comes in the next 65 days. But perhaps the refineries have their fourth quarter calendar already scoped out, and 65 days is _exactly_ their inventory limit.

That is, unless Ike, or another major hurricane, decides to pay a call at the Gulf oil patch. Eisenhower had a staff meteorologist. Maybe John McCain should too.
Posted by Albert Bates at 1:30 PM

The McCain drilling strategy is a win for the Republicans, maybe just in time for the November elections.

More drilling will the lower the rate at which the U.S. is increasingly dependent on imported oil at some time in the distant future.

Drilling for oil in ecologically sensitive areas is a partisan political issue.

The impacts of Peak Oil, however, will soon shift the focus of debate toward how to survive high oil prices, maybe as soon as an attack on Iran.

Increasingly, average Americans will not be able to afford both fuel oil for heating and gasoline for commuting to work (starting in to be felt more in November). When unemployment increases in the ever worsening global recession, a larger and larger percentage of people will not be able to pay for fuel oil to heat their homes. These realities will shock the nation with big increases in home heating bills this winter (starting in November). Oil prices will be higher for the winter of 2009.

In such an environment, the Democrats are making a mistake with their “no drilling” position on this issue. As Peak Oil becomes more widely known as the cause of economic malaise, public attitudes will shift away from environmental concerns and toward more drilling.

This is equivalent to a 33% drop in 7 years. No one can reverse this trend, nor can we conserve our way out of this catastrophe. Because the demand for oil is so high, it will always be higher than production; thus the depletion rate will continue steadily until all recoverable oil is extracted.

Alternatives will not even begin to fill the gap. And most alternatives yield electric power, but we need liquid fuels for tractors/combines, 18 wheel trucks, trains, ships, and mining equipment.

We are facing the collapse of the highways that depend on diesel trucks for maintenance of bridges, cleaning culverts to avoid road washouts, snow plowing, roadbed and surface repair. When the highways fail, so will the power grid, as highways carry the parts, transformers, steel for pylons, and high tension cables, all from far away. With the highways out, there will be no food coming in from “outside,” and without the power grid virtually nothing works, including home heating, pumping of gasoline and diesel, airports, communications, and automated systems.

This is documented in a free 48 page report that can be downloaded, website posted, distributed, and emailed: http://www.peakoilassociates.com/POAnalysis.html