The Farm has always been known for being home to some pretty unusual characters. Stephen asked Ina May once, “Why do we have such weird friends?”

“That’s just who likes us,” she replied.

One of our weird friends of late is the Henslow's Sparrow, whose habitat has been in steady decline for most of a century now, but the pace of that destruction is picking up and without protection, could be one of the approximately 30% of all species now marked for extinction, sooner rather than later.

Tennessee is not even supposed to be an area known as Henslow’s habitat, except that here on a The Farm, and in three other locations in Tennessee, it has sought sanctuary. It shows up in March to late April and leaves in late August to September.

Henslow's Sparrows use grasslands that have well-developed litter, relatively high cover of tall, dense grasses and generally low woody stem densities. It needs a few scattered forbs for song perches, but mostly goes for tall, native grass prairie to the exclusion of pasture, hayfield or golf course roughs. Field size is an important component of Henslow's habitat and large grassy areas (>50 acres) are needed to support persistent populations, which are inclined to hold territories in the interior of fields rather than at the boundary. All of this fits to a T the large, terraced, keylined fields at the interior of the Farm which we have husbanded in native prairie grass since the mid-1980s, when they were removed from agricultural production but preserved as field.

At our Quarterly Town Meeting today, Cynthia Rohrbach showed us the census of Henslow's Sparrows observed in Tennessee, according to the Natural Heritage Database. In 1997, a single breeding pair and 2 males were observed to our east at the Arnold Engineering Center near Tullahoma. In 1998 four sightings were made near Fort Campbell, north of us on the Kentucky border. It was not until 2006 that a nesting population was confirmed, with 5 sightings in the Bark Camp Barrens Wildlife Management Area and 3 territorial males discovered by Conservation Biologist Bill Pulliam at The Farm. In 2007, The Farm had 13 territorial males, 3 fledglings, 1 juvenile, and 3 others seen or heard. There were no other sitings anywhere in Tennessee. 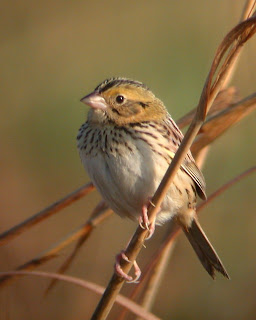 Cynthia said the handouts she passed around were to let people know why she is passionate about the Henslow's Sparrows and why we need to be concerned about protecting their habitat. The Farm Land Use Committee took heed last week and delayed the maintenance of those fields until after the birds have out-migrated to their winter range next month. Later this fall we will perform a managed burn over the greater portion of the grassland to renew native seed, re-fertilize the soil, and deny territory to invasive plants, but we will keep a substantial portion as recognizable habitat for the sparrows when they return in March and April. The sumac and small trees encroaching on the edges of the field will be hand-pulled. Proposals by residents unaware of the sparrows to put in large, fenced gardens in this area have been studied and then diverted to less sensitive but equally fertile areas nearby.

In too many parts of the world, concern for one small, seemingly insignificant bird might not rise to the level of halting development or altering human land use patterns, or the patterns of domestic pets, at least not without a highly visible battle between the birdwatchers and the Powers That Be, or dog owners. Here at the Farm, as demonstrated by the sentiment of the meeting, concern for other species is commonplace and uncontroversial.

The little bird gets to be.
Posted by Albert Bates at 2:18 PM