"President Stein asked what preparations were warranted at this time. The CDC Director said that the United States was not as well prepared for a large scale pandemic as was commonly assumed." 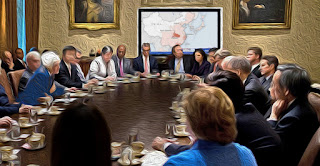 Late in the afternoon on January 24, after Chinese President Xi Jinping closed down 15 cities, locking 60 million people into their homes, and ordered the building of entire new hospitals, US President Jill Stein, M.D. convened an emergency meeting in the Cabinet Room at 1600 Pennsylvania Avenue. Attending were her National Security Advisor Susan Rice, the Director of National Intelligence, the Attorney General, the Surgeon General, the Director of the CDC, the Administrator of FEMA, and secretaries of State, Defense, Treasury, Commerce, HHS, Homeland Security, and Veterans Affairs. Also invited but not attending were the Speaker of the House and the Senate Majority Leader, both of whom were boycotting the White House.

The President thanked the group for coming and apologized for interfering with their evening plans. She then turned to the Secretary of Health and Human Services, who activated the plasma screen. The first slide showed a map of China with Wuhan City in a red box.

Over the course of a few slides. the Secretary described what had been learned about the novel coronavirus emerging there, the cooperation being offered by President Xi, and what preparations outside of China were now warranted, given the latest information about its reproduction rate, case fatality rate, and extent of spread.

“What makes this particular coronavirus potentially more dangerous than the previous SARS-CoV influenza of 2003 is that apparently it can be spread human-to-human prior to the onset of symptoms,” she said. “The average infected person spreads the disease to two or three others — an exponential rate of increase. If, as the Chinese are telling us, it can be transmitted by people who are just mildly ill or even pre-symptomatic, then a single case can become ten thousand before anyone knows that the original person has it. That means this virus will be much harder to contain than previous flu epidemics.

“It is early, but data so far suggest that this virus has a case fatality risk around 1%. This rate would make it many times more severe than typical seasonal influenza, putting it somewhere between the 1957 influenza pandemic and the 1918 influenza pandemic.

The Secretary of Defense interrupted. “We are being informed by reliable sources that this virus escaped or was stolen from a Chinese government lab in Wuhan. Should we not be treating this as a potential bioterrorism incident?”

The HHS Secretary turned to the Director of the CDC to address the question. “We have definitively ruled that out, Mr. Secretary,” the Director said. “That Wuhan lab is well known to us and we have CDC personnel working alongside Chinese counterparts there. The Chinese had gathered some 800 coronaviruses from wild animals, like bats, to study, including several viruses very similar to what we are seeing now, but after sequencing the DNA genome of the novel coronavirus, we can confirm what the Chinese told us on January 12, that this CoV is different from anything they had and likely originated in a wild bat, which jumped to another animal, such as a pangolin, and then was transmitted to humans through a wet market. One of the first things China did, back on January 1, was to close their large wet market in Wuhan.”

“How can you be so sure of their testing,” the Defense Secretary insisted.

“That’s why we did our own,” the CDC Director responded. “Based on results from analyses using polymerase chain reaction, full genome sequencing, antibody tests of blood samples and the virus’s ability to infect human lung cells in a petri dish, none of the sequences matched those of the zoonotic viruses previously held by Wuhan or any other lab.”

“Based on genetic evidence, we suspect the source to be a horseshoe bat from a cave in Yunnan.”

President Stein asked what preparations were warranted at this time. The Director said that the United States was not as well prepared for a large scale pandemic as was commonly assumed. “Most hospitals today are specialized to treat the kinds of diseases that insurance companies will pay large sums for, such as transplants and elective surgeries. The number of ICU beds and ventilators is lower than may be required in a large viral pneumonia outbreak. I don’t even know if there are enough surgical masks and other protective gear to supply the needs of health care workers in the event this reaches pandemic proportions.”

“I think there are, if you look at our present stock,” interjected the Secretary of Veterans Affairs. The FEMA director nodded.

“I am glad to hear that,” said President Stein, “because we will be looking to you for a backstop if this turns out to be as bad as it might be. I would like you to re-inventory your supplies and get me a wish list as soon as you can.”

The Secretary of Veterans Affairs spoke in a stage whisper to the FEMA Director, “Presuming she survives the Senate Impeachment trial next week.” The President glared at him but let it go.

“Now I want to know how CDC proposes to move forward.”

“Our latest response team is wheels up from Atlanta in 90 minutes, Madam President,” said the Director. “They will coordinate with the Chinese authorities to see if we can speed antigen mapping and accelerate contact tracing for these cases in Wuhan. The essential thing now is quick containment. We don’t know how far outside China it has gone already.”

The Surgeon General interjected. “Madam President we also have some indication that the Chinese have shown some success accelerating recovery in the more serious cases with a drug called Remdesivir. It is manufactured by Gilead. We should be expediting production of that.”

Turning to the Attorney General, President Stein said, “We will need to activate the Defense Production Act.” He nodded and scribbled on his notepad.

“People, we need to be sure that our response to this does not fall disproportionately on the poor, the indigenous peoples, people of color, and those who have been walled out of the American health care system before now. I will be looking to HHS to track any disparities in the provision of preventive measures, emergency access, and care.

She turned and looked directly at the Secretary for HHS. “I will expect you to identify those disparities quickly and to tell me, so we can move whatever we have to in order to level the field.

“All right. I thank everyone again for coming. I want to stress the importance of this and I think you all get that now. It could be a misfire. This may not be the big one. But it has so far shown the key ingredients and until we can rule it out, we need to behave as if this is the worst virus the modern world has seen. We are doing exactly that. Now go ahead and enjoy your evening, be prepared, and we will update you as we learn more.”

Like your recent tale of returning to a post-pandemic, and apparently more or less post-collapse US, this hints at more than it tells, though I can well imagine that a Green elected President without benefit of a sizeable Green influx into Congress would be dealing with boycotts and an impeachment attempt. However, I'd like to think that Medea Benjamin, and not a warmongering imperialist like Ms. Rice, would be Dr. Stein's National Security Advisor. :-)