Farewell to the Fishes

And scales full of the sunset Twitch on the rocks, no more to wander at will The wild Pacific pasture nor wanton and spawning Race up into fresh water.

A Greenland Shark (Somniosus microcephalus) will live 275 to 400 years and extend up to seven meters. Every member of its species has a shrimp-like parasite, the copepod Ommatokoita elongata, embedded in its eye. Although this is thought to severely impair the vision of the shark, there is a theory that these copepods are bioluminescent and attract prey. In a recent newsletter for the Grantham Institute (UK), an anonymous observer mused:

A Greenland Shark born four centuries ago would have swum in a world that existed not long after the Elizabethan era when the human population was little over half a billion. Now, with the human population nearing 8 billion and the climate changing faster than ever before, I wonder what a Greenland Shark born today will experience if she survives to 400? 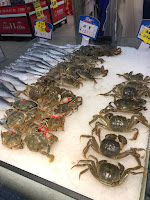 If she survives even another 40 years (hundreds of tons of the species are still caught accidentally by shrimp and halibut trawlers around the Arctic), she will find the company has changed. There will be, for instance, no more Yangtze giant softshell turtle (Rafetus swinhoei) because the last known female died in a Chinese zoo on April 12. There will be no more Vaquitas (only 30 remained in 2017); Hawaiian Monk Seals, Guadalupe Fur Seals, Steller Sea Lions, or Southern Sea Otters. Stocks of tuna, mackerel, and bonito have fallen by almost 75 percent since 1970. Last Sunday an ingested plastic bag starved a young, 3-meter True’s Beaked Whale (Mesoplodon mirus) off Florida’s East Coast. The population of Beaked Whales is too small to measure. 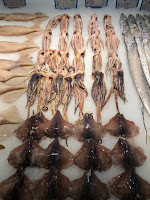 Last November I began a blog about plastics in the ocean and subsequently a chapter in my book, Transforming Plastic, with a summary of the famous lecture on the exponential function by the late mathematician Albert Bartlett. I observed that since the invention of modern synthetic polymers, the plastics industry had gone through their fourth doubling since 1968. By any fourth doubling, the curve’s trajectory is still at the bottom of the J and only beginning to bend upward. By 2030 the slope up will be much more obvious, just as it is for climate change or feral rabbits. By 2040 each human baby born will have twice the detectable microplastics in its blood as now, and in 20 years its child will have twice that much, then double that, then twice that again as we complete this century.

That is the arithmetic that caught up to that young Beaked Whale last Sunday.

Bartlett gives the example of bacteria filling a bottle. The doubling rate is every minute, so Bartlett poses this challenge to his students: 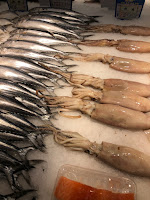 If you were an average bacterium in that bottle, at what time would you first realize you were running out of space? Well, let’s just look at the last minutes in the bottle. At 12:00 noon, it’s full; one minute before, it’s half full; 2 minutes before, it’s a quarter full; then a 1/8th; then a 1/16th. Let me ask you, at 5 minutes before 12:00, when the bottle is only 3% full and is 97% open space just yearning for development, how many of you would realize there’s a problem?

In 2011 the UN’s Food and Agriculture Organization (FAO) didn’t see the problem coming at them in the form of cheap and better underwater sonar, GPS, and far more aggressive offshore fishing fleets. That year they said that 71% of the commercially important fish types were being caught sustainably. Only 29% were being overfished and in need of greater regulation.

Today, only 8 years later, 90% of the world’s marine fish stocks are now fully exploited, overexploited or depleted. According to the World Economic Forum:

Fish accounts for 17% of all animal protein consumed in the world, and 26% of that consumed in the poorest and least developed countries. The ocean is also an important source of income; nearly 60 million people work in fisheries and aquaculture, and an estimated 200 million jobs are directly or indirectly connected with the fisheries sector. [500 million by other estimates]. Fish remains one of the most traded food commodities worldwide, and 54% of this trade comes from developing countries. For these countries, the fish trade generates more income than most other food commodities combined.

The sustainability of fisheries is therefore essential to the livelihoods of billions of people in coastal communities around the world, especially in developing countries, where 97% of fishermen live. But if we stay on our current course, we will push one of the planet’s prime food sources to the limit and compromise our ambitions for a better world by 2030. The subsidies that do harm to fisheries, and which have underpinned the dramatic decrease of fish stocks in the last 40 years, must be withdrawn by 2020. Only then can we begin to achieve the UN’s Sustainable Development Goals.

Harmful fisheries subsidies are estimated to total more than $20 billion a year [$35 billion by some estimates]. Not only do they fuel overexploitation, they disproportionately benefit big business. Nearly 85% of fisheries subsidies benefit large fleets, but small-scale fisheries employ 90% of all fishermen and account for 30% of the catch in marine fisheries.

You can apply Bartlett’s exponential arithmetic and instead of calculating the doubling time of bacteria, calculate the halving time of ocean fish. We know that to be approximately 50 years for the period between 1970 and 2020 but remember: 1970 was before computers, navigational satellites, and sophisticated fish-finders. It was before the era of mile long, practically invisible, nylon monofilament nets scraping corals up conveyors to 10000 HP factory ships. If that 50-year doubling rate were to be sustained to 2070 through more advanced technology and more aggressive fishing, present fish stocks would be cut to one quarter. Should it survive all those nets, our Greenland Shark might go through its long life never encountering a mate. 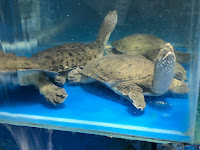 According to Ken Norris, lead author of a study by World Wildlife Federation and the Zoological Society of London that tracked 5,829 populations of 1,234 species such as seals, turtles and dolphins and sharks, "Billions of animals have been lost from the world's oceans in my lifetime alone. This is a terrible and dangerous legacy to leave to our grandchildren." The marine life of the ocean is now at the “brink of collapse.”

As if law-abiding fishermen and seafood producers are not problem enough, illegal, unreported, and unregulated fishing activities give short shrift to national and international fishing regulations, including: 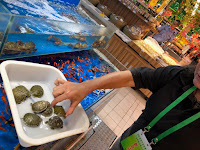 Unregulated fishing is a global problem that threatens ocean ecosystems and sustainable fisheries. It threatens the natural resources that are critical to global food security. The new UN Sustainable Development Goals call for ending overfishing and destructive fishing practices by 2020 and restoring stocks "in the shortest time feasible,” but in many areas and for many fish stocks there are no applicable conservation or management measures. Even where fishing activities are in managed areas, they may be conducted improperly with impunity by vessels without nationality, or by those flying a flag of a State or fishing entity that is not party to the regulation or the conservation measures of the host nation. And so it goes. You can call for change, but can you really enforce it?

And after the fish are gone, to where shall we turn? Half of all food-insecure countries are experiencing decreases in crop production — and so are some affluent industrialized countries in Western Europe — due to rapid climate change. The rate of decline in caloric availability across the world’s top ten crops is 1 percent per year.

We chastise meat-eaters for negligent and profligate consumption to the detriment of soils, forests, and climate, but we say little or nothing to those who consume fish ensnared by dubious practices or from species poised at the edge of extinction. We do nothing to deter the fishermen of the world from doubling their number in the coming years. In fact, in many places, we train them and pay them to fish more efficiently. And they will.

Until, one day, they don’t.

Three whole days and nights alternate
Old Nokomis and the sea-gulls
Stripped the oily flesh of Nahma,
Till the waves washed through the rib-bones,
Till the sea-gulls came no longer,
And upon the sands lay nothing
But the skeleton of Nahma.