Pushing on to Venus

"We need to stop our warming ways or there will be Hell to pay." 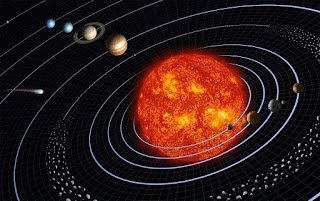 I sometimes look back at my 1990 book, Climate in Crisis, to take grim consolation in parts I got right or amuse myself about where I went wrong. I was spectacularly wrong in suggesting that there might be a “peace dividend” from ending the Cold War that would more than pay for the infrastructural changes to reduce fossil emissions and bring on a renewables revolution. We did have a renewables revolution, but so far it has only added to the problem — higher population, more consumption, and no withdrawal from our fossil fuel addiction. The lofty but unmet goals set at Rio in ’92 and Kyoto in ’97 are now well in our rear-view mirror.
One of my conclusions has vacillated between correct and incorrect depending on what study you just read. In “Chapter Three: Runaway,” I described a so-called Venus scenario in which positive feedbacks such as blue water at the poles, deforestation at the equator and melting permafrost pitch Earth into an irredeemable heating trajectory, boiling off the oceans, building a dense cloud cover, and creating 500-degree surface temperatures, much like Venus. 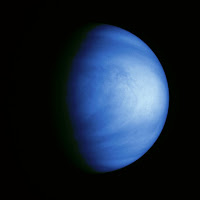 This colorized picture of Venus was taken Feb. 14, 1990, from a distance of almost 1.7 million miles, about 6 days after NASA’s Galileo made its closest approach to the planet.

Over the intervening decades, various scientific studies have debunked that theory, arguing that Earth has a faster rotation than Venus, that its oceans are so large and deep that the heat acceleration required to boil them would be unobtainable, and that Earth’s climate has several states of repose, or equilibrium, where positive feedbacks are kept in check by negative responses. This is the oft-used “cup-and-ball” model, most recently applied in the 2018 PNAS paper by Steffen, Rockstrom, Richardson, Lenton, etc., Trajectories of the Earth System in the Anthropocene. In 1986, Kasting and Ackerman looked at what happened when ancient Earth had a surface temperature of approximately 85° to 110°C and concluded that Earth could never become like Venus. 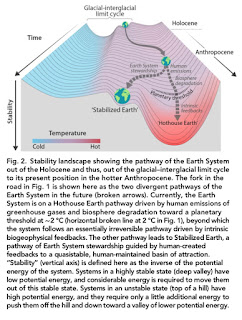 On the other hand, there are frequent refutations of the equilibrating theorems, pointing to system disruptions that occur at obscenely high GHG concentrations, such as 100 times present levels. Even the high-end estimate for methane burps cited by Shakova or Wadhams is only around 50 gigatons, whether exhaled in a single belch or spread out over a decade of 5 to 7 degree warmer arctic seas.

Dr. Shakhova: We use an analogy where we compare the East Siberian Arctic Shelf to a bottle of champagne. So the gas produces within this bottle and it keeps accumulating as long as the cork serves as an impermeable lid. This lid is subsea permafrost. Before it was just permafrost [on land] but after it was submerged it became subsea permafrost and served to preserve an increasing amount of gas produced from its release to the ocean and atmosphere above. While this lid is impermeable, there is nothing to worry about. But when this lid loses its integrity, this is when we start worrying. This is where the methane is releasing and the amounts of methane currently releasing makes us think it will increase as a result of the disintegration of this permafrost body.

100 times present atmospheric CO2 would be 321,800 gigatons. That is well beyond the capacity of either fossil fuel reserves or stored methane in clathrates and permafrost, or a combination of both, to generate, so we are safe from the Venus scenario, right?

Not so fast. Kasting and Ackerman admit that in 1986 they lacked the computing power to model clouds so they simply left those out. A study this February by Tapio Schneider, Colleen M. Kaul, and Kyle G. Pressel in Nature Geoscience modeled the clouds.

With the advantages of supercomputers at NASA’s Jet Propulsion Lab and the computational prowess of ETH Zurich’s Euler cluster, the Schneider team was able to simulate stratocumulus cover response to greenhouse warming. At double present CO2 concentrations, about 3°C warming, there was little change. Most clouds are formed because air warmed by the Earth’s surface (or forced over mountains) cools as it rises, condensing water vapor to cloud droplets. Stratocumulus clouds typically blanket about a fifth of the low-latitude ocean and help radiate heat back to space, dropping cool air towards the surface. 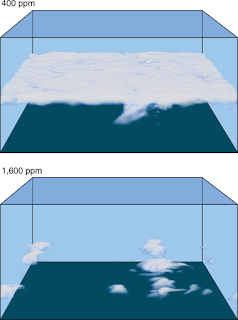 Schneider’s group modeled for varying concentrations of greenhouse gas equivalent to 400 parts per million of CO2 (similar to today) on up to 1,600 parts per million. Up past 1,000 parts per million, there were no major surprises. While the world as a whole got around 4°C warmer and human population would likely have ebbed as agriculture crashed, the cloud deck would have still looked familiar to wandering souls gazing skyward in hopes of relief from the blazing sun.

But then, at about 1,200 parts per million, the clouds suddenly dissipated. And without that shade reflecting sunlight, the world warmed another 8°C. Whether the ball fell into the cup and some new equilibrium was established, or additional positive forcings took Earth to 18 or 20°C warmer and eventually boiled off the oceans, we can’t yet say.

If there is a point to be made, it is this. We need to stop our warming ways or there will be Hell to pay.

That 1200 ppm phase change threshold is 787 ppm above our present level of 413 (it was 354 the year Climate in Crisis was published). That 1200 number represents 6154 additional gigatons of carbon dioxide (GtCO2), or 162 years at present emissions, but our emissions are still in a curve of acceleration. As we leave behind the era of light sweet crude and frack for “unconventional” oil and natural gas, we generate far more methane emissions from those fracking operations (wellhead pressure drops fairly soon after a well is tapped, and at lower pressures leaking increases), tar sands, pipelines and LNG terminals and transports. The CO2 equivalents and the decay products of methane multiply atmospheric CO2 concentrations. We are still at the low back corner of the Hockey Stick.

The best my co-author Kathleen Draper and I could come up with in BURN: Using Fire to Cool the Earth for negative emissions technologies’ (NET) potential was about 50 GtCO2e (gigatons carbon dioxide and equivalents) annual withdrawal (although an ocean response mechanism will halve that in net practical effect). Of course we don’t know the speed at which Earth systems will respond to rapid CO2 withdrawal because Earth systems have never done that before, but if we keep going — well beyond present fossil emissions of about 38 GtCO2e — and throw in melting permafrost, the blue ocean North Pole, destruction of the Amazonian and Indochinese rainforests, and other unhappy trends, the capacity to tree-plant our way out of this will be overwhelmed.

The irony is, we have other choices in lifestyle that can get us out of this jam, and they happen to be happier, healthier, and more personally satisfying ways to live. Climate in Crisis at least got that part right.

You encourage me to do more and then tell you about it. Help me get my blog posted every week. All Patreon donations and Blogger subscriptions are needed and welcomed. Those are how we make this happen. PowerUp! donors on Patreon get an autographed book off each first press run. Please help if you can.
Posted by Albert Bates at 6:00 AM

Judging by what I see almost daily in the sky here in Northern Nevada, the desperate measures of SRM (solar radiation management), aka geoengineering, are revealing how desperate the powers are in concealing the true state of the environmental predicament we are in. The poisonous elements used to achieve this will worsen the problem. Its insane.