"In the USA, where the fog of corrupted information lies thick on the ground, a drugged and distracted public still wants its gasoline, home heating oil, jet fuel, 3000-mile potato chips, and cheap."
In a recent post to Resource Insights, energy analyst Kurt Cobb wrote:

Every culture lives by its narratives. And, these narratives come to us not just in the form of novels, plays, movies and television shows. They also come in the form of news stories, ideology, religious doctrine, theories that are social, political and scientific, and myriad other works which fall under the category of nonfiction. Over time these narratives become outmoded, and new ones emerge, or at least, the old ones are reworked in light of new circumstances. 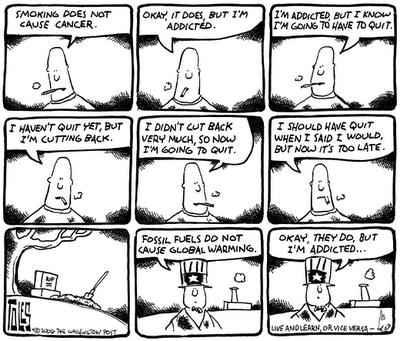 Cobb would doubtless be the first to tell us that narratives sometimes outlive their host reality. In recent posts we have been calling these zombie myths, but maybe someone will come up with a better term.
Many zombie myths have outlived any helpfulness and are now consuming their host societies.

You can see this in the way we remove mountains to find coal, send children to die in conflicts that do nothing to promote security, provide reliable energy, or protect family values anywhere. Instead, we bankrupt our monetary systems, medical systems, educational systems and political integrity in pursuit of utterly unobtainable nonsense. Zombie myths are staggeringly stupid and ruthlessly destructive.

A good example of the destructiveness of our myths was provided by Rita Rubin last week in USA Today. The paper reported that 15000 Medicare patients die each month from slipshod care experienced in US hospitals. Given the modern journalism standard epitomized by USA Today, it would be helpful to bracket that number with a large error band to the higher side. The real death toll could be an order of magnitude larger. Last year a federal study estimated that in October 2008, 314,000 Medicare hospital patients were harmed by the care they received, just in that one month. Preventable causes of death included bed sores, infections, and internal bleeding from blood-thinning drugs, among other abuses.

Medicare is the government health program for people 65 and older. If you were to ask a US Congressman if Medicare might be improved, such as by using a tax-financed health approach of the type used in most other “rich” countries, the likely response would be that “America has the best health care system in the world.”
That is a zombie myth.

Expecting that a Congressman would change something that might affect the bottom line of a health insurance corporation in any direction other than to make it more profits would be another zombie myth. Congressional representatives are elected by, and controlled by, health insurance corporations and Big Pharma. They can ignore the hundreds of thousands of bodies stacking up outside their offices because they are in the thrall of zombie myths. When you look at them like they are crazy, they wonder if you are crazy.

Something we have recently come to recognize is that between the zombie myth and a new normal there may lie a realm of transitional or transformative narratives, an amphibian meme that lives partly in the past and partly in the present. While we may resent being forced to live within a construct that no longer serves, we may find some temporary shelter under a transnarrative. 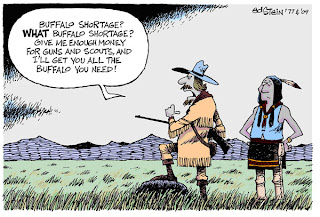 Michael Ruppert’s Collapse Net, Nicole Foss’s Automatic Earth, and Matt Savinar’s Life After The Oil Crash throw reality in your face. After a while, you get the drift. We have many of these sites listed in the column just to the right, under Usual Haunts and Fellow Ne'er-do-wells.

The transnarrative is a more subtle beast, and two examples are Cobb’s novel, Prelude, and James Howard Kunstler’s excellent World Made By Hand series. With these works, a Cassandra author who dwells in present reality and can easily see what is about to transpire imparts his wisdom by way of allegory — a light tale with heavier meaning. Our own transnarratives, The Post-Petroleum Survival Guide and Cookbook and The Biochar Solution, are crude by comparison, forcing people to shift gears too quickly, maybe losing a few teeth in the process. 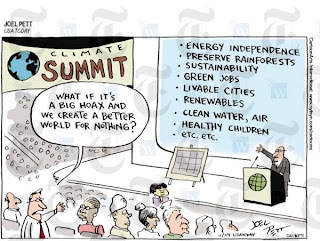 In the USA, where the fog of corrupted information lies thick on the ground, a drugged and distracted public still wants its gasoline, home heating oil, jet fuel, 3000-mile potato chips, and cheap. If you try to tell it that all that comes at the cost of civilian deaths in Af-Pak, torture chambers at black sites, dead pelicans in Louisiana, invasive searches at airports, mountaintop removal and gas fracking in Appalachia, or Earth’s climate going to Hades in a Hummer, they cover their ears and chant “nananananaIcanthearyounananana.”

In these circumstances, a transnarrative can be just the thing. Hence, films like The Day After Tomorrow, Wall-E and Book of Eli. Even our fascination with zombies and vampires provides a hint of Zeitgeist — that we dwell in the calm before a storm, and that what is coming will be far more unpleasant, not to say brutal, for a good long while.