Last of the Naked Apes

"That we are still cutting down forests and wrecking soils is what makes us the last of our kind. "

The spiritual universe is manifest to man as the Creation, the Creation that supports life. We believe that man is real, a part of the Creation, and that his duty is to support life in conjunction with the other beings. That is why we call ourselves Onkwehón:we, Real People.

— Address from the Haudenosaunee to Non-Governmental Organizations of the United Nations, Basic Call to Consciousness. Geneva Switzerland, September 1977 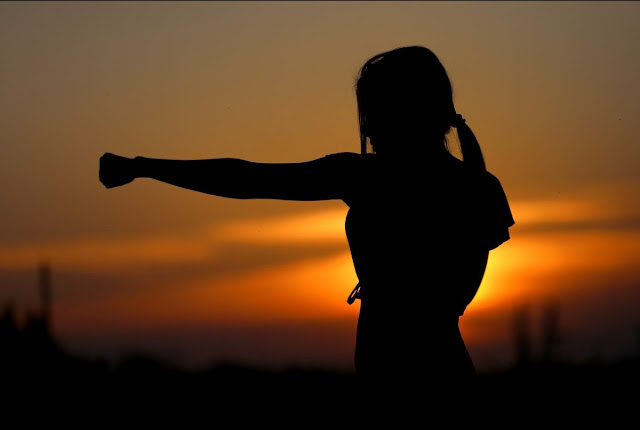 A friend sent me a message containing the image above, which was supposed to be a about practicing martial arts in a Gaian way, but when I first glimpsed it a much deeper emotion welled up.
I did not see a woman in the zenkutsu-dachi front stance, forward leg bent at the knee, rear leg straight, hips and shoulders square forward.

Instead, I saw a young brave, fist raised towards the setting sun. As in, it is a good day to die.
The welling emotion was the sense of what that feels like — to perceive the likelihood of not only your own demise, but the demise of your entire people and the ways of your ancestors. As a young brave, you can go passively, as in the final walk of a million Jews and Roma to the gas chambers at Auschwitz. You can revolt and try to topple an evil government. Or you can pause, stake yourself to the ground, and write a death song. In reality, you have zero agency over the outcome. That is what I saw in that photo.

Rapid onset climate change, buffered only by the vast heat storage of the ocean, and then only for a short while, is coming at us now with speed and power over which we have scant agency. I say “scant” rather than “no” because I still cling to the proposition that we have the tools (albeit not yet the collective willingness) to reverse global warming and rapidly cool the Earth. We humans have done it before, inadvertently, in the years following the Mongol Invasion of Europe and the Columbian Encounter in the Amazon. We know how to quickly make our planet cooler. We know the power of forests and soils.

That we are still cutting down forests and wrecking soils is what makes us the last of our kind. One can only hope enough of us come to that realization while there is still this faintly perceived sliver of time. 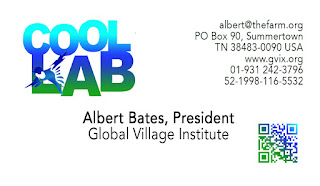 You encourage me to do more and then tell you about it. Help me get my blog posted every week. All Patreon donations and Blogger subscriptions are needed and welcomed. Those are how we make this happen. PowerUp! donors on Patreon get an autographed book off each first press run. Please help if you can. This week I am away in London attending a Common Earth meeting on the Blue Carbon Charter for the oceans, with special attention to the Caribbean Basin. Global Village is working with the Maya Mountain Research Farm, Carbon Gold, the Toledo Alcaldes Association, and others to design a Cool Lab biorefinery for a Maya village that will combine sustainable development and drawdown. We are in London seeking support from the Green Climate Fund. I changed the QR glyph this week to link to that proposal in case you’d like to learn more.