"Water may stain the frescos, earthquakes may close the tunnels, but the temples will survive." 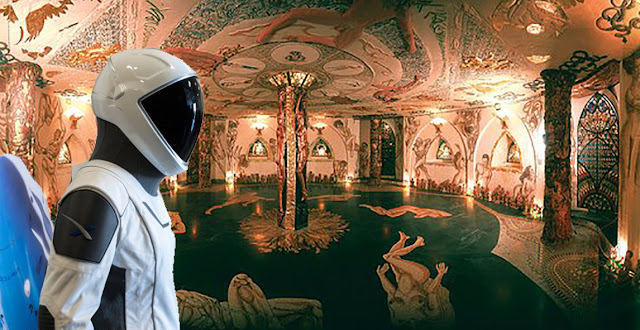 I had only just posted somewhere that I was on my way to Damanhur when a friend texted me to make sure I visited the Time Travel Chamber. I never discovered that but it did not matter. The entire Temples of Humankind project was designed as a conversation through time, easily on par with sending the music of Blind Willie Johnson and Chuck Berry beyond the Solar System (in the sense of passing the termination shock) into the Kuiper belt and then, in about AD 41977, to Andromeda.

For those who put humanity’s odds at surviving the present century past what any respectable bookmaker would take, which is where Carl Sagan stood when he dispatched Chuck Berry to the stars, the Temples offer an opportunity to ink our species’ final tableau. 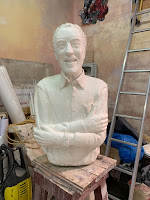 Falco Tarassaco (Hawk Dandelion), nee Oberto Airaudi (1950–2013), was born with the unusual gift of remembering not only all his past lives but all his future ones, some 600 in all. Doubtless, this was quite a burden for a little boy, but in one future incarnation he had been an interplanetary delegate to a council of elders and was appointed to be pre-incarnated in Turin in 1950 in order to rescue our planet. He was able to un-shoulder some of that responsibility eventually to thousands of followers, who crafted his vision and mission into Damanhur, a federation of spiritual communities launched in Northern Italy in the early 1970s.

In some 30 books, Falco described a distant point in space from which our consciousness arose and then crossed light years to reach us, the earlier civilizations that came and went in the quest for utopian living arrangements worthy of that gift, and his sense of indefatigable optimism that everything was all happening to a grand plan with a very, very happy outcome. If your unbounded soul could resonate with any of that, you were more than welcome to join him at Damanhur. 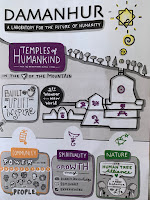 The community ran into a patch of trouble with authorities for a few years when an ambitious public prosecutor tracked rumors to the secret entrance of the temple complex, where Damanhurians had for a dozen years been quietly (using loud music to conceal the sound of jackhammers) hewing subterranean chambers in the mountain behind their home without benefit of licensed engineers or the required permits. After four intense years of legal battles to save the excavation from demolition, in 1996 the temples were given legal recognition as a national treasure and, a decade later, Damanhur was proclaimed a model of a sustainable society by the United Nations. 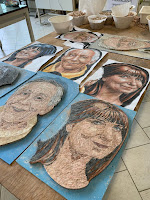 As one wanders from brightly-lit chamber to chamber within the temples, moving alternately between levels hand-hewn into the hard myanite of the mountain, one is struck not only by the amazing skills and artistry of the Damanhurians but by the pervasive optimism that each face etched into the marble floors, murals, and statues portrays. Here, In fresco and tile, are some 800 individual smiling Damanhurians, past and present, immortalized now and forever in the deep rock inside this Alpen landscape, kilometers above sea level.

Longyearbyen, Norway, the Arctic home of the Svalbard Global Seed Vault, was chosen for its stability to safeguard millions of the world’s most genetically important seed — 13,000 years of agricultural history — from nuclear war, asteroid strikes and other disasters, but it is already at risk because it turned out to be in the fastest-warming part of the world. Heatwaves have partially melted the permafrost, flooding the vault with water, forcing caretakers to dig drainage ditches. The seeds are stored at a cautious -18℃, cool enough to remain viable for 1,000 years, but the cooling system relies upon the surrounding natural permafrost, snow, and ice, and if the present warming trend continues, the average temperature at Svalbard will increase by 8.3℃ (14.4°F) by 2100. Farewell, sweet corn. 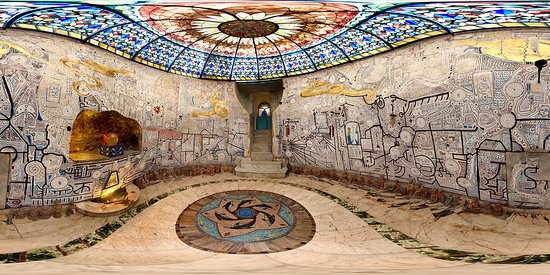 When surface temperatures exceed the capacity of mammalian sweat glands to hold our bodies within the narrow bounds of organ function, calibrated over the course of a billion years within a climate that never varied more than 5 degrees; when melting glaciers and expanding water molecules add scores of meters to sea levels around the coastlines of the world; and when green methane skies send fireball lightning rolling across the lifeless Sandhills of Nebraska; these Damanhurian chambers will abide. Water may stain the frescos, earthquakes may close the tunnels, but the temple will survive. They are a postcard through time.

Some bright blue day millions of years from now, Martian astronauts, the progeny of microbes hitching aboard an unsterile rover to the Red Planet, may return to a restored Earth and discover this cavern and all the treasures it holds. Perhaps one of them will be Falco himself! The message this great work of art conveys, while poignant, is joy-filled and grateful for good times had. What more noble work could there be? Hodor!

I wish you had written a lot more about this visit!