"Evolution dropped a dual-hemi into the drivetrain of a fecund nomad, injected Nitro and walked away."

JUST ABOUT 72 years ago my mother was taxied from our home on Aukai Street to the Kapiolani Gynecological Hospital so that doctors and nurses there could help bring me into the world. On New Year’s Day 1947, the ward was a pretty busy scene with 13 of us new islanders choosing that day to be born. Babies ready? … Boom! This is me in the upper left corner of Sunday’s Honolulu Advertiser, obviously not all that happy to be being photographed.


The other big news that day was the weather. Hawaii had been pounded all week by a storm that drove 40-foot waves against the coast and sent tide waters sweeping 1000 yards inland. Maui Harbor was wrecked and parts of Hilo had to be evacuated. In Alaska, the 135-mph gale was the unprecedented third blast of that winter for Nome. On the mainland, a cold front invaded the South into Florida and extended clear all the way over to the valleys of California.

On page 7 of the Advertiser, John Wayne is shown boarding the first Hawaii Airlines passenger flight from Los Angeles to Hilo. A transpacific route to Kwajalein, Guam and Tokyo was being surveyed. In Washington, Republicans were flooding Congressional hoppers with anti-strike bills to keep unions from recovering their pre-war bargaining power. In other news, Bernard Baruch was resigning his chairmanship of the Atomic Energy Commission, having devised a plan to place peaceful atomic energy under international control. Under the Baruch plan, soon to be adopted by the United Nations, the world would disarm its nuclear arsenal and all nations would agree never to build any more. A strict inspection regime would guarantee the peaceful atom would be forever safely caged.

Having acquired 7 decades of hindsight, it is easy to look back at some of these pronouncements with grim humor. 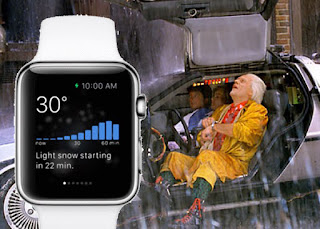 Selection could have favored other quadrupeds with hands, such as raccoons or geckos, but the spinning wheel landed on apes. Evolution could have, and perhaps did, supply more powerful brain engines to marine mammals, but it dropped a dual-hemi into the drivetrain of a fecund nomad, injected Nitro and walked away.

That bicameral brain evaporated the track in a parsec but see that smoke coming from under the hood? We need to eject. Except someone forgot to put that feature in.

That’s the thing about our neurobiology. It has a problem with looking very far into the future. We could, but we avert our eyes. Instead we discount future against present. Nate Hagens, who has thought long about the larger evolutionary patterns, writes:

To change people’s minds about behavior you have to either make the case really scary, or the time-to-impact really short because of people’s evolved tendency to focus on the present (and cultures impact on causing discount rates to be even steeper). For most Americans, ‘the future’ is this weekend. Climate change is real (as are myriad other environmental externalities), but if people are losing jobs and have to worry about feeding their kids, concern about the natural world will take a back seat to more mundane realities. 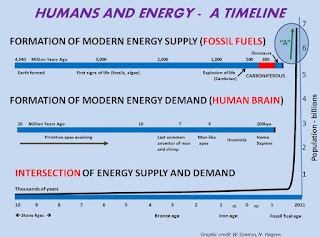 Nature abhors a gradient. Life requires one. Possessing gradients, and throttling them to create islands of low entropy while global entropy rises, is the very essence of life. Those organisms that are most effective in accessing and degrading energy have had evolutionary advantage. This includes human societies. For us to voluntarily give up or reduce access to the highest quality fuels goes against our evolutionary grain for ‘more’ or ‘progress.’ Reducing consumption via top-down authority is possible (think Tokugawa Japan) but extremely unlikely. Our modern history is one of doing everything in our power to keep continued global access to high EROI fuels possible.

Declining energy productivity (lower aggregate EROI), instead of causing a belt-tightening in the 1970s, caused us to go to debt to continue high levels of consumption. That led to lower and lower debt productivity (less and less GDP per additional $ of debt), to the point that central banks had to take over the model. In the US, our economy, ex-government, stopped growing in 2005. China, Russia, Brazil, etc are following the exact same model (plummeting debt-to-productivity). So we added government debt to offset declining private growth. Once debt productivity goes below zero (as it is currently in the US and probably in many European countries), we are simply transmuting wealth into income–and the timeline of being able to continue that strategy becomes very short, irrespective of oil prices. 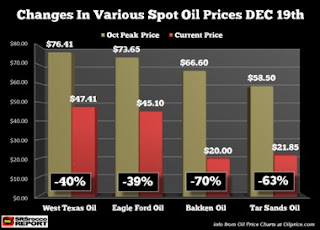 In recent weeks oil prices fell to their lowest since mid-2017 with London futures closing at $53.82 and New York at $45.59. The Peak Oil Review says: 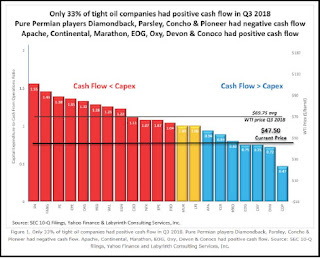 The company says its shale wells can make double-digit returns with oil at just $35 a barrel. Nearly all of the companies concentrating on shale oil drilling seem to be losing money at $45 a barrel. While Exxon can hide any losses in shale oil among its massive production of conventional oil, it will be interesting to see if it will be so efficient that it will make money where others have failed. Exxon is coming late to shale oil, and many of the best locations have already been drilled. Moreover, Exxon is subject to the same problems of moving oil to markets and shortages of workers and other infrastructure in the region. Exxon’s CEO Darren Woods, however, expects strong growth through 2025 when he’s expecting to produce much as 800,000 b/d from the Permian and the Bakken Basins.

This contrasts with California’s recent announcement that it will be winding down oil production in that state owing to heightened awareness of climate change. It is losing entire towns to uncontrollable fires. That tends to get people’s attention.

The neurobiological discount rate for climate change may be working for Californians but apparently not for Texans. Nor does it seem to work for most USAnians when it comes to understanding national debt, GDP, Fed interest rates, or the hole being dug so deep into the balance sheet that Congress is cashing in National Parks to fund another continuing resolution.

California Governor Jerry Brown steps down next week at age 80 after four terms in office. Earlier this month he told the Seymour Tribune:

“The threat of nuclear annihilation and climate change on a permanent basis looms, and therefore it is time for new leaders to rise up and make the case and mobilize the people for what needs to be done. What needs to be done is unprecedented, and therein lies the dilemma.”

For me, at 72, near-term human extinction is a foregone conclusion. I will likely be out of here before the worst parts of that fate beset us. I just pity the children arriving this New Year to the maternity wing at Kapiolani.

You encourage me to do more and then tell you about it. Help me get my blog posted every week. All Patreon donations and Blogger subscriptions are needed and welcomed. Those are how we make this happen. Please help if you can.
Posted by Albert Bates at 5:00 AM

I have been absent for a while, but now I remember why I used to love this site. Thank you, I will try and check back more frequently. How frequently you update your web site?