How Many Trees Do We Need?

"A city like New York (18.6 million people) should require 55.8 million trees to provide its oxygen."

Is it possible that we could wreck the atmosphere enough that humans would suffocate for a lack of air to breathe? Probably not. Still, it’s not a chance worth taking.

Earth’s atmosphere is 78 percent nitrogen and human activities add only very slightly to that, although now more than all the natural sources. 20.9 percent of what’s up there is the oxygen we need to breathe. Water is about 1 percent. The remainder — less than one percent — is all the other gases, including all the greenhouse gases.

Most people think we get our oxygen from trees, and this is true in part. Trees release oxygen when they make glucose from carbon dioxide and water — a net gain of one molecule of oxygen for every atom of carbon layered into a tree. Estimates vary on how many trees it takes to produce the oxygen required by one human, and one might expect that because the amount of oxygen produced by a tree depends on its species, age, health, and surroundings.

A human breathes about 9.5 metric tons of air in a year, but oxygen only makes up about 21 percent of that air and we only extract a little over a third of the oxygen from each breath. That works out to a total of about 740 kg of oxygen per year.

A 2-ton sycamore tree produces about 100 kg of oxygen per year. A 100-ft Northern Spruce, according to Northwest Territories Forest Management, 18" diameter at its base, produces 6,000 pounds of oxygen (2,727 kg).

According to Environment Canada, the average tree produces 260 pounds of oxygen per year (118 kg). If we accept that as a good estimate, we each need about 6 mature trees to support ourselves.

A city like New York (18.6 million people) should require 112 million trees to provide its oxygen. It has those — in the Taconics, Adirondacks, Poconos, and Berkshires — although it shares them with Newark, Philadelphia, Hartford, Albany and others, so maybe not enough for everyone. Cities like Mexico City (21 million), Mumbai (21 million), Sao Paolo (21 million), Shanghai (24 million), Delhi (25 million) and Tokyo (38 million) are straight out of luck.

Fortunately for all of us, ocean phytoplankton and coastal mangroves also make oxygen. Not so fortunately, both of those sources are being destroyed by climate change and reckless development.

Are we in trouble? Not any time soon.

Free oxygen did not exist in the atmosphere until about 2.4 billion years ago during the Great Oxygenation Event, when oceanic cyanobacteria learned to produce oxygen by photosynthesis, setting off the greatest mass extinction in history. Say goodbye to all the happy anaerobes. They either went underground or died. 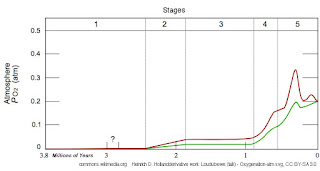 Over the next 2.4 billion years, cyanobacteria made a lot of oxygen. That said, we are not entirely out of the woods, so to speak. Most organisms have evolved to live in an environment that has a very specific set of conditions. We have come to rely on air containing about 21 percent oxygen.

That concentration has varied over time, with the normal equilibrium up to about 600 million years ago being about 15% but then rising and peaking at about 30% around 280 million years ago and gradually declining since. It has never been less than 20% in human evolutionary history. How low it can go before humans feel a need for some breathing space is anyone’s guess. By destroying all the natural sources — forests, corals, mangroves — while also polluting the atmosphere, we are putting a lot at risk.

That blue halo that colors the Earth in space is less about the color of our oceans than the scattering of light from the wavelengths of the gases in our atmosphere. As we destroy that balance, particularly the relative proportion of oxygen, we may just lose that halo. We could lose a lot more.
Originally published at www.patreon.com.
Posted by Albert Bates at 7:00 AM

Maybe the slowing of the warm, north-running gulfstream has reduced the thickness of the mixed layer at the ocean surface, causing the decreasing phytoplankton levels.