"We need to walk through walls with a new genre of quantum solutioneering."

In the fall of 2016 the John D. and Katherine T. MacArthur Foundation made a bold move that had more than a few jaws hitting the floor.

“Some problems cannot be solved by grants of the size that foundations typically provide,” they said as they announced their 100&Change competition. They proposed to fund a single project with a one-time $100 million grant. The project, which would be chosen by a panel of judges after careful vetting, had to make real and measurable progress in solving some critical problem of our time.

On December 20, 2017, 16 months after its ground-shaking announcement, the competition was concluded. The winner was Elmo, Big Bird and the whole crew at Sesame Street. Their proposal was to massively scale up early childhood development programs for Syrian refugees.

When we learned of the competition we considered whether it would really be worth our time to compete. After mulling the idea for a few days, we decided it was. We did not seriously imagine we could win because we knew that the high stakes would draw in a lot of heavy hitters and the odds were with them. Indeed, the winner was someone whom MacArthur had already been contributing to regularly for decades. One of the requirements was to have some sort of track record showing you could count that many zeros and not lose any. This was not Afghanistan. They wanted a known quantity.

The team we assembled for our proposal were only small potatoes by comparison — a handful of educational non-profits with combined budgets of less than $3 million per year.

Our rationale for joining the race was because we knew it would force us to improve our thinking and fine-tune our approach. The critical problem of our time was for us, of course, climate change. We believed we could transform $100 million into not just “real and measurable progress” but potentially the whole enchilada — a complete and comprehensive solution.

The late Stephen Gaskin, borrowing from R. Buckminster Fuller, James Grier Miller and others, taught us early in the 70s that running energy through any system works to organize the system. “Attention equals energy,” he would say. This principle applies equally to pecking orders in birds or political parties, bureaucracies, commercial air travel, skill at poker, and disputes at the UN Security Council.

From this principle, we knew that the mere act of preparing a MacArthur submission would help tease out the strengths and weaknesses of our solution to climate change and if, in that process, we could fix any weaknesses or flaws, we would increase the odds of survival for all of us.

Hyperwicked problems, which are inherently cross-cutting, cannot be solved by traditional Cartesian methods of breaking them into small bits. They have be to be tackled as wholes. A key decision we made from the start was to not “silo” our approach but to come at climate change holistically.

Solving for climate change involves addressing human population, food, water, the built environment, energy and economics — and the inertia of human behavior. We needed to work at planetary scale and see multidisciplinary, interconnected wholes within larger wholes. We need to “walk through walls” with a new genre of quantum solutioneering.

This means we need to transition every social institution on Earth from deterioration to regeneration — taking guidance and inspiration from nature by using the principles of biomimicry. Simply stated, it will take at least three to four decades to fully transition the infrastructure for transportation, urban buildings, supply chains, and business models for revenue that provide the financial life blood of transformation.

We could rely neither on strictly top-down government approaches nor on bottom-up grassroots approaches, but rather — and this was a conceptual breakthrough that came from engaging in this exercise — must come to rely upon microenterprise hubs as our primary delivery vehicle. We needed Capitalism 2.0, or more specifically, networked B-corporations whose first allegiance is to ecological benefits, then participant and shareholder profit.

We knew that while a $100 million grant might provide design, engineering, education, demonstrations, and viral marketing, to reach our goal would mean a program much bigger than $100 million. We would have to design something to be self-sustaining as it scaled. And because the times we live in are inherently fragile, coming at the end of the fossil fuel era to a world swamped with Ponzi’ed debt and in the early throes of climate Armageddon, whatever we did had to be designed to be inherently anti-fragile — it must thrive as systems all around it collapse.

We had one month in which to pull all that together and submit it, along with a short video, financial statements, IRS letters, authorizations by partners, memoranda of understanding, and much more.
What we proposed for our solution was both technical — biorefineries, climate ecoforestry, educational products and business structures — and ephemeral — a high degree of community cohesion, conscientiously constructed. That second piece was the glue that would hold everything together and make it grow, long after the seed was planted, in good times and bad. 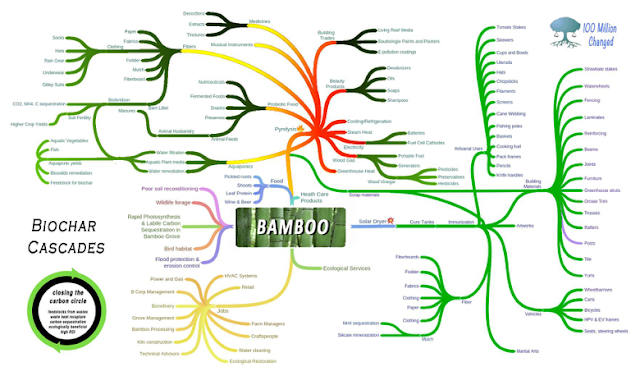 Our proposal was perhaps too ambitious or outré for MacArthur’s judges. The finalists were all projects with simpler, less politically controversial subjects. To MacArthur’s lasting credit, all the proposals have now been gathered together and published to the web as an open library. We confess that although we have not yet read them all, many of the other proposals were just as good as ours, and a few were even better. We hope this library is closely perused by those searching for real solutions to many of the world’s seemingly most intractable problems.

We salute the Sesame Street Muppets and their partners, the International Rescue Committee’s Syrian Refugee program, and wish them success in fulfilling their appointed mission. Y’all are doing Jim Henson proud. The plan is to launch a new, regional version of Sesame Street that will be available to Syrian refugees and local kids across Jordan, Lebanon, Iraq and Syria. It will be distributed over traditional television channels, the internet and mobile phones. It will also serve as an educational curriculum for childcare centers, health clinics and outreach workers visiting the shelters where refugees live. The workers will deliver books to kids and caregivers.

Our proposal for a Cool Lab is still floating in the contemplation-sphere. If you know someone with $100 million, we can still do this.

Note to our regular readers: we have been receiving many requests for recommendations of worthy projects, particularly involving biochar and climate change, that would be good to support this holiday giving season. We recommend three: Global Village Institute, International Biochar Initiative, and the #LetsRestore Campaign.

I totally thought you were being sarcastic, a la Borowitz, that the Muppets will be rolled out in Syria environs with $100M in cash!. How independent is MacArthur Foundation from US foreign policy, akin to USAid, PeaceCorps, Ford Foundation, Rockefeller Foundations, etc? Don't forget that pipeline that was supposed to be laid across Syria to get Turkmeni (I recall) oil out to the west.

Maybe you could get together the top ten also-rans to merge into the mother of all attempts to solve Houston's problem. You like Moses may never see the promised land, but you will die knowing it's there. Climate catastrophe averted.

Maybe your 100 day retreat will create the energetic resolve to proceed.

where is the GEN proposal on the MacArthur website? Or who is the lead organization and what is the proposal title?

I found the GVI proposal, here's the link for others: http://100andchange.foundationcenter.org/profiles/79/#video

A predictable outcome which left me convinced current structures will just keep puttering down the road of senescence, with occasional spectacular failures. But I'm glad you did the work to clear your thinking and understand the problem better. Truly, the future will not be like the past. The connections you made and will make are the way ahead.