"On the GOP side, Jeb Bush never saw Trump coming. Nobody there did."

Since he created the minds and hearts of men, the Creator preserved truths in our hearts so that we would naturally know right from wrong. He knew the details of important events would be tampered with, so he stored his most important concerns in our hearts — to be good to yourself and others, to know the difference between right and wrong, to seek truth always, and to never neglect your conscience until you die."

— Suzy Kassem (Rise Up and Salute the Sun: The Writings of Suzy Kassem) 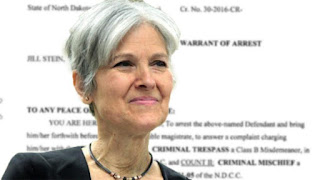 While penning last week’s post we were reminded just how powerful the heart is in human affairs. It was difficult to us to view either of Lawrence O’Donnell’s two clips, both already watched several times in preceding weeks, and not feel our heart beating stronger, out throat go dry, our tear ducts start to well.

This is how history swings.

These are the feelings that people feel when they stand up for human dignity. When, as Martin Luther King said, “men and women straighten their backs up… because a man can't ride your back unless it is bent.”

Listening to King say that makes your back straighten a little.

This is part of our biological makeup. When we are inspired (inhale deeply) our chest swells and our heart pumps. We are filled with resolve. We will risk our safety. We will abandon our security. We will act with courage, bravery, and noble purpose, even abandoning thoughts of our own personal good for the betterment of an inspired cause.

It is an animal reflex. 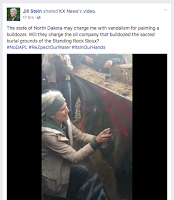 Naturally there are demagogues who exploit this. Most sports work that noble reflex like a muscle, building it up in both athlete and spectator. Even advertising tries to tap into it to sell junk. In popular music it is known as “anthem.” But for all its misuse and abuse, the selfless gene also sends out a shard of hope for us humans in a desperate time.

—Joanne Harris (The Gospel of Loki)

Most of the time we tell people we intend to vote for Jill Stein this November we catch a lot of scorn. In some company, we find ourselves having to brace before we utter the words. Getting herself arrested for painting "Frack this" on a bulldozer blade was a good start, but is not enough to start a revolution. And yet, voting for Stein is neither unwise nor hopeless.

It is not hopeless because we have seen the effect new media is having on not just politics but virtually every aspect of modern life. Bernie Sanders did not have a strong campaign organization or a fraction of the money that Hillary Clinton did, but he tapped into crowdfunding and social media like no one before.

The same can be said of Donald Trump, although he is still riding the reality television wave more than pumping out insults to Twitter. Both Jeb Bush and Hillary were the anointed candidates before the primaries, both lost badly, and only by dint of Hillary’s clout within the Party Oblast did she manage to sandbag Bernie and carry through to the convention.

On the GOP side, Jeb never saw Donald coming. Nobody there did. 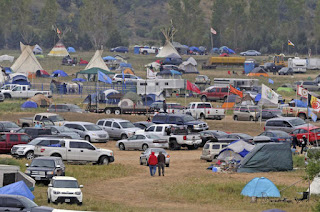 That’s precisely why Jill Stein cannot to be counted out.

The US election takes place on a single day, give or take motor voting. Most ballots are cast within about a 16-hour window from 7 am on the East Coast to 7 pm on the West Coast. During that window, what happened in the primaries doesn’t matter. What happened in the debates doesn’t matter. Who has the best team, the biggest advertising budget, the most yard signs, or the momentum going into that 16-hour window suddenly stops mattering. What matters is what happens in the voting booth.

We are now in a new world: UberAmazon. Most USAnians want, and many millennials are used to, just-in-time instantaneous gratification.

This is a new phenomenon, on a historical time scale, but it is how the Singing Revolution toppled the Soviet Empire in Estonia. It is how Ukrainians found the chutzpah to toss out Yanukovych.

Ukraine is an interesting example because although it was quickly exploited by US neocons and their media lackies, it began from this new wave of spontaneity. When peaceful protesters in Maidan Nezalezhnosti (“Independence Square”) were brutalized by state security forces and that made it to Twitter, a social-media frenzy quickly morphed into a mass action against the President and Parliament.

In Ukraine, according to official reports, on September 1, 2013, the number of registered unemployed was 435.4 thousand people, of which young people (from the ages of 14–35 years) were 183.3 thousand persons or 42.1%. In 2012, those registered at the State Employment Service were 887.9 thousand unemployed people under the age 35, or 48.6% of the total number of persons who were registered; 52.9 thousand of them were college graduates, 33.5 thousand completed vocational schools, and 6.3 thousand secondary school graduates. Among young people in the age group of 24–29 years, the unemployment rate increased, as compared with the year 2011, to 9.5% from 9.2%. Almost one-third of the total number of unemployed young Ukrainians were in labor exchange for more than a year since their release.

This new generation, who has not smelled the gunpowder and has not participated in the previous revolutionary events, was the most active protesters this time around. The Ukrainian youth, de facto, declared a “new policy” qualitatively different from the previous one, not only by its name, but also in its form and content. This attempt is in the same vein with the revolutionary sentiment of 1968 in Western Europe, which was also against conservative society and its legacy of political and unethical values. It was a struggle of generations, parents, and children. In this context, the ideal of the Ukrainian youth and the impetus for the revolution lie in the hope of changing Ukrainian society and pursuing salutary European values.

What happened in Occupy Maidan in late 2013 and early 2014 was that protesters gathered — more than 100,000 at first — the police left them alone and after a time their numbers dwindled to less than 500, at which point the police waded in with truncheons and went riot on them. Video clips spread through smart phones and soon 500,000 students were back in Maiden. Christmas came and went and the police left them alone until the numbers dwindled and then the police swept in again. Eighty-eight protesters died. Video clips spread through smart phones and brought in people from all over the country, who stormed the Presidential Palace on February 21, causing Yanokovitch to flee and opening the door for Victoria Nuland to install a US puppet government so US neocons could bait the Russians and Hillary could accuse Donald of cozying up to Vladimir Putin. 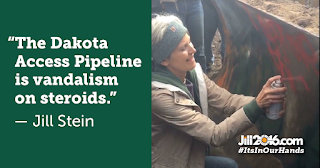 The point of this story being not about Clinton, Putin or Trump, but about smart phones with cameras.

The ether is getting faster. If people are fed up with both Trump and Clinton (and what the heck, Putin too) they might just decide to stay home in record numbers. Alternatively, they could get a text or an Instagram from a BFF who said they went to their precinct and everyone there was voting for Stein, so why don’t you come on down and see if we can flash mob the election?

Inside the beltway campaign professionals are still wondering how Jeb Bush could have gotten beaten so badly, with as much money, such a top-shelf staff, and as many newspaper endorsements as he had.

Every day, more than one billion people use Facebook. That has never been true before the 2016 US election.

Bernie proved his priorities have the majority of voters. Same priorities as Jill. When people tell you a vote for Jill is a vote for trump, ask them " who do I vote for if I want Jill Stein to be president?"

Wouldn't it be great if social media could be used for such sweeping good instead of watching us or getting us to buy junk?