"“There is a bottleneck right here … and today I am directing my administration to cut through the red tape, break through the bureaucratic hurdles, and make this project a priority.”— Barack Obama, March 22, 2012." 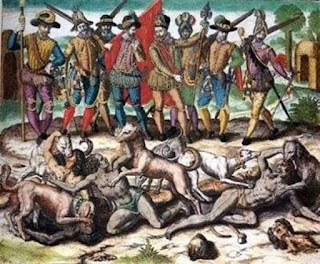 On April 1, in the last phase of istawicayazan wi, the moon of sore eyes, acting with love and fierce determination, the youth of the Standing Rock reservation stood together in prayer at the place called Sacred Stone. At the close of their prayer, they remained. Figuratively, they drove stakes into the ground and tied their legs to them. They might be killed there, but they would not leave.

The Dakota Access Pipeline (DAPL) is a 1,172-mile, 30-inch diameter steel pipe that will connect the million-barrel-per-day Bakken and Three Forks fracked oilfields of North Dakota to a bigger pipeline in Illinois for transportation to Louisiana and Texas SXL crude oil terminal facilities and there to be loaded onto ocean-going tankers.

DAPL will carry 570,000 barrels per day. Unless one of those supertankers sinks, one hundred percent of that will go to the atmosphere as deadly, human-extinction-intending, greenhouse gases. So will the oil and gas flowing through the other 71,000 miles of pipelines owned by ETP.

It will cost more to build capacity, produce, refine and burn that oil than to provide the same energy from clean, solar power sources.

Two months before the Standing Rock youth assembled, the US Army Corps of Engineers, acting for the Obama Administration, gave DAPL an allotment of NWP “fast track” permits. These permits are usually reserved for powerlines or other utility right-of-ways that do not threaten water supplies. NWP approval meant that ETP could legally bypass public notice and regulatory review under the National Environmental Policy Act and the Clean Water Act.


Sierra Club, National Wildlife Federation, several 350.org local chapters, the Center for Biological Diversity, WildEarth Guardians, Corporate Ethics International, and others used the comment process on the KXL/Transcanada pipeline to detail the flow of abuses to environmental and native sovereign rights that issued from the White House “all of the above” policy.

Both the Clinton and Trump campaigns count ETP and its allies as major funders. Harold Hamm, founder and CEO of fracking giant Continental Resources, is an energy aide to the Trump campaign and potential future U.S. Secretary of Energy. Hillary Clinton has remained studiously silent on the Dakota pipeline protests but openly supports the Obama fast track policy.


On September 3, only a day after the Standing Rock Sioux filed action in court identifying their sacred sites, ETP brought in bulldozers to raze the land named in that complaint and affidavits and render the issue moot. To prevent that, entire families left their homes on the reservation and went onto the sacred sites in an attempt to block the bulldozers. Pipeline security workers responded by letting loose dogs and pepper spray.

It recalls Christopher Columbus feeding Taino babies to his armored war dogs for the sport of his officers.

There have been at least 58 arrests thus far at the #NoDAPL protests, with arrest warrants pending against both journalist Amy Goodman, who filmed the dog attacks and was charged with trespass, and Green Party presidential candidate Jill Stein, who spray-painted a bulldozer blade and was charged with vandalism. 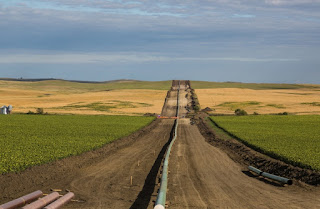 When a federal judge denied a tribal motion to halt pipeline construction, the Obama administration stepped in to ask that ETP voluntarily cease other construction than in the area in controversy. Most news media, including ourselves, mistook this for meaning the White House was coming to the aid of the Sioux. In fact, it was exactly the opposite, and anyway the ETP voluntarily chose not to stop.

Construction continues. ETP just purchased the ranch where the Sacred Stone Camp is located and where additional native burial grounds and sacred sites have just been identified.

The tactics chosen by the Standing Rock Sioux could have come straight from the rules for satyagraha by Mohandas Gandhi. The Nation followed the letter of the law in making its timely public comments and administrative interventions, in filing for an injunction, and in opposing this assault on its safety and sovereignty by physically standing in the way. Its protests are peaceful and nonviolent. It invited the whole world to watch as military blockades re-routed traffic and kept away the press, the National Guard was brought up to support the corporate goons and then praying children were uprooted with attack dogs, their mouths filmed dripping with the blood of those children.

When individuals are betrayed by a government, they can sue or protest. When the treaty protections of an occupied nation are betrayed by their occupier, their recourse must be to the international legal system. This week, Standing Rock Chairman Dave Archambault II addressed the 49-member United Nations Human Rights Council in Geneva Switzerland. He invoked the memory of Sitting Bull:

Sitting Bull came from Standing Rock and one the most famous quotes that he has is, “Let’s put our minds together and see what we can build for our children.” So today as this is the topic, something that guides us in our decision-making as leaders: We are putting our minds together so that the kids, the ones not yet born, have something better than what we have today.


Were you born too late to be a suffragette or freedom rider? To march across the Edmund Pettis Bridge in Selma? To encircle the Pentagon with the Yippies and try to levitate it? To sail with Albert Bigelow on Golden Rule and later Earle Reynolds aboard Phoenix, and still later Peter Willcox on Rainbow Warrior or David McTaggert on Vega, into the Pacific test zone to block the H-bombs?

Climate change is coming to the plains. Mother Nature doesn’t care how many dogs the oil barons have.

This is our moment. We are this season’s people. Its a good day to die.

Inspired rap. Thanks for this...We Shall Overcome!

Albert Bates - thank you for your welcome thoughts. Despite my wife's heritage as a Cherokee her heart and mine are with the Sioux. Like all politicians our president and his party's nominee play both sides of the issues. If one believes in the intent of the Paris Accords then an "all of the above" is a terrible idea. Thanks, Russ Day

After reading this and Kunstler's, I recalled an article I read in Rolling Stone (I think ?) about a writer in the Bay area in 1976 during a particularly bad drought who let his lawn die, as did his neighbors, in response to a plea from his local utility to cut back, conserve, etc. He received a bill from said utility for an usually high amount considering how much he had conserved. Marching down to the utility company to receive an explanation, he was told that they conserved TOO much and that it was necessary to raise the minimum charge to cover the shortfall. He immediately went home and out of frustration started watering his landscape again. I see ourselves in the same predicament. Don't let frustration rule us. Do not go quietly into that void between meaninglessness and despair. Retain a sense of humanness and decorum as we face this most despairing epoch in our collective memory.