" What kind of force can leave a four million pound rock on top of a cliff? According to the oceanographers, it was waves. "

The Glass Window Bridge of North Eleuthera is one of the island's more popular attractions. Once a naturally formed bridge of rock, it was destroyed in a hurricane and has been replaced by a man-made version, presently in need of repair. From the bridge, a narrow span uniting separated parts of the long, thin island, you can see the dark blue Atlantic churning away to the East and the calm turquoise waters of the Caribbean to the West.

In their seminal piece on the emerging Hyper-Anthropocene,  James Hansen and co-authors provide a photo of mysterious boulders on a cliff overlooking the Atlantic Ocean. The boulders, we now know after extensive research by many geological experts, were dredged from the ocean floor, taken up and over a cliff and left there like Easter Island statuary, in a great storm event during a past interglacial warming epoch. The largest weighs about 2300 tons.


It is hard to imagine that the air we exhale lifted these huge boulders, but indirectly, it did. "CO2 is the principal determinant of Earth’s climate state, the “control knob” that sets global mean temperature,"

Hansen's group says, pointing to the ice core correlations between temperature and CO2 tracing in lockstep back 800,000 years. CO2, once emitted, takes 100,000 years to be removed from the atmosphere by nature.
To provide a comfortable climate for mammals such as ourselves, atmospheric concentrations of 260 ppm CO2 prevailed through much of the Holocene, a far cry from the Anthropocene's current 400 and rising.

The CO2 dial must be turned to ∼ 260 ppm to achieve a Holocene-level interglacial. CO2 ∼ 250 ppm was sufficient for quasi-interglacials in the period 800–450,000 years before present, with sea level 10–25 m lower than in the Holocene. Interglacials with CO2 [at]∼ 280 ppm, i.e., the Eemian and Holsteinian (400,000 years ago), were warmer than the Holocene and had sea level at least several meters higher than today. 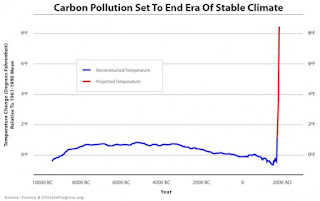 For many years, climate scientists have predicted that sea level rise would be slow but inexorable, driven less by ice melt and more by thermal expansion of water molecules. Because of the speed with which humans are changing climate, this conventional wisdom has been undermined. Newer science shows that the paleohistoric sea level changed not over 1000 year periods, as earlier thought, but in decades to centuries.


The IPCC (2013) report increased estimates of sea level rise compared to prior IPCC reports, but scenarios they discuss are close to linear responses to the assumed rising climate forcing. The most extreme climate forcing [RCP8.5, 936 ppm CO2 in 2100] is estimated to produce 0.74 m sea level rise in 2100 relative to the 1986–2005 mean sea level, with the “likely” range of uncertainty 0.52–0.98 m.

Less than a meter rise over the coming 85 years is no longer credible. The reason is the rate of ice melt.


Ice melt is proceeding so fast now that it will be the primary driver of sea level rise this century. Moreover, what is being added to the oceans, primarily at the poles, is freshwater, not saltwater. Freshwater sinks at a different rate than saltwater, so in those parts of the Earth where there is a downwelling of the oceans, the current will be slowed. For the Atlantic Conveyor, this slowing effect has not yet been confirmed by observations. Nevertheless, Hansen's models predict a 30% slowdown by 2100. As the driving currents that move oceans around the world slow, heat becomes more concentrated at the Equator. The differential is magnified by the cooling effect of icewater pouring into the oceans at the poles. 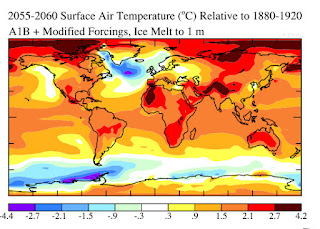 
But there is another, bigger impact in the tropics, and it involves those Eleutherian boulders. Ocean warming will disturb familiar weather patterns.

Owing to the spin of the Earth and the equatorial heat of the land surface in Africa, most Atlantic hurricanes originate as tropical storms moving East to West along the Tropic of Cancer. As they reach the warmer waters of the continental shelf, they pick up strength. More available heat energy builds bigger hurricanes.

What kind of force can leave a four million pound rock on top of a cliff? According to the oceanographers, it was ocean waves, propelled by "a potent sustained energy source" taken from an unusually warm tropical ocean and strong zonal temperature gradients in the North Atlantic. These conditions last existed at the end of the Eemian epoch, before the last great ice age, 115–120 thousand years ago.


The boulders must have been transported to their present position by waves, as two of the largest ones are located on the crest of the island’s ridge, eliminating the possibility that they were moved downward by gravity or are the karstic remnants of some ancient landscape. A tsunami conceivably could have deposited the boulders, but the area is not near a tectonic plate boundary. The coincidence of a tsunami at the end-Eemian moment is improbable given the absence of evidence of tsunamis at other times in the Bahamas and the lack of evidence of tsunamis on the Atlantic Coastal Plain of the United States. The proximity of run-up deposits and nested chevron ridges across a broad front of Bahamian islands is clear evidence of a sustained series of high-energy wave events. 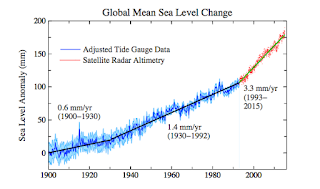 Sea level rise relative to coastlines is not gradual. Storms are the means by which changes occur, because in their scale and violence they carve new landscapes that remain altered when the events subside. New bays are formed, old ones filled in. Barrier islands are erased, peninsulas split into islands, and cliffs are carved from windward slopes.


Temperature change in 2065, 2080 and 2096 for 10 year doubling time should be thought of as results when sea level rise reaches 0.6, 1.7 and 5 m, because the dates depend on initial freshwater flux. Actual current freshwater flux may be about a factor of four higher than assumed in these initial runs, as we will discuss, and thus effects may occur 20 years earlier. A sea level rise of 5 m [16 feet] in a century is about the most extreme in the paleo record but the assumed 21st century climate forcing is also more rapidly growing than any known natural forcing. 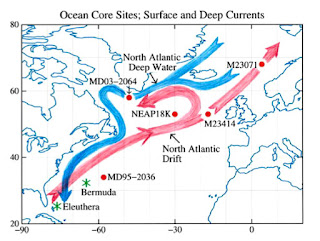 Another effect of the freshwater is to retard the speed of ocean warming, since salt stores heat more efficiently than water. This is good news in the near term, but worrisome once the freshwater input ends, about the same time sea level rise reaches 5 meters. Then the cooling effect is removed and the full effect of warming begins to be felt. The oceans warm much faster, the energy imparted to storms becomes much greater, and besides the pounding surf, we may once more experience boulders the size of volkswagens being deposited miles inland.


Of course, it will be a wonder if anyone is still there then. Yesterday the heat recorded in the city of Bandar Mahshahr, Southern Iran was 115°F, but when you add the moisture – the dew point was 90 – it felt like 165 (74°C). Will this be coming soon to a place near you? The best scientific minds seem to think so.


[T]here is no morally defensible excuse to delay phase-out of fossil fuel emissions as rapidly as possible. We conclude that the 2◦C global warming “guardrail”, affirmed in the Copenhagen Accord (2009), does not provide safety, as such warming would likely yield sea level rise of several meters along with numerous other severely disruptive consequences for human society and ecosystems. … Given the inertia of the climate and energy systems, and the grave threat posed by continued high emissions, the matter is urgent and calls for emergency cooperation among nations.

Many other problems will hit before Miami goes under.