Once “Teenage Genius” now fights for his life

“Ionizing radiation is one of the most biologically destructive forces in the universe. It is fiendishly inappropriate to try to tame it for a source of energy or anything else.”
"

Kaiser Permanente Cancer Clinic, Santa Rosa California, April 1, 2022
Back in 2012, Taylor Wilson told reporters from the principal news delivery media of that day, “When I hold something radioactive it is an indescribable feeling, kind of like when I am holding my girlfriend.” 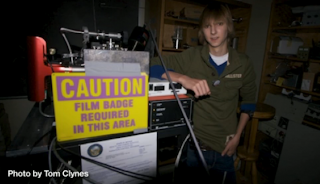 At 11, he started mining for uranium and buying vials of deuterium gas and plutonium on the Internet. At 14 Wilson became the youngest person to build a fusion reactor, at home, in his parents’ Texarkana, Arkansas garage. At 17 he gave a TED talk describing how, besides the fusion device, he had developed an advanced nuclear radiation detector, a radio-telescope, and even a cure for cancer. That cure is something he wishes he had now. Like all the other inventions, it was more hype than reality.
“I was deluded and deceived,” he said through his oxygen mask. “My teachers and mentors had convinced me that the hysteria about nuclear radiation was overblown, and so I was handing radioactive materials using only light covering — a raincoat and rubber gloves.”
At 14, when he was recruited to the Davidson Academy of Nevada, the nuclear safety officials there made him wear a dosimeter. “I used to brag that I’d never gotten a dose that’s above legal levels,” Wilson said. “Now I understand how meaningless the legal limit is. Now I know there is no safe dose. If I had known then what I know now, I would have been an astronomer, or a carpenter.” 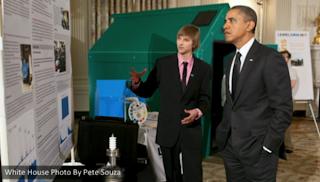 As a teenager, the way he knew his fusion reactor was working was when it produced enough radiation to cause lethal radiation poisoning. He told an interviewer back then, “pop culture has instilled in Americans an irrational fear of radiation, when in fact the household chemicals under your sink are more dangerous.”
Wilson has six types of cancer, and the worst of these, an adenocarcinoma of his colon, has metastasized to his liver. His doctors give him only weeks to live. “Hindsight is always 20/20,” he says, “but I think we were all deceived by the nuclear public relations people who paid for illegitimate scientific research and then weaseled their way into the back rooms where government regulations and school textbooks were being written. None of them actually made yellowcake the way I did, but they willfully set a trap that would ensnare an innocent boy.”
Wilson was not even born when Three Mile Island and Chernobyl reactors melted down but he was undeterred by the four-reactor explosion at Fukushima in 2011. The string of nuclear accidents in the following decade in France, India, China, Cuba and the United States did not phase him either, because he assumed it was just bad engineering or stupid operators.
“I finally began to grasp the problem when a routine x-ray found nodes on my lungs,” he said. Immersing himself in health science, he read Radiation and Human Health by Dr. John Gofman, a co-discoverer of plutonium. He credits that book with changing his outlook.
“Suddenly I saw into the submolecular level for the first time, and understood the interaction between ionizing radiation and living structures, like my own DNA. Ionizing radiation is one of the most biologically destructive forces in the universe. It is fiendishly inappropriate to try to tame it for a source of energy or anything else. We should never have unlocked it in the first place.” Wilson’s voice trailed off as weakness overtook him and he became unable to continue.
Well-wishers from all over the world have sent cards that fill his hospital room.
Posted by Albert Bates at 6:17 AM

April Fools to you too! Well spun cautionary tale.