"Spain is now as forked as Ireland. It not only has all the problems of a crumbling paradigm — the religion of endless growth — but it has elevated the high priests of that paradigm to its seats of power."
Twenty-one and a half years ago we wrote:

“What will it be like when this world food crisis arrives? We can make some educated guesses. The decline in living standards will be felt everywhere. At the lowest level of poverty, the price of food will rise above the power to purchase. There will be food riots in major cities…. At the upper levels of wealth, the pain will be felt, but it will be less acute…. Inevitably, such stark differences in purchasing power will deepen animosities and elevate world tension.”

— Bates, Climate in Crisis: The Greenhouse Effect and What We Can Do (Book Publishing Co, 1990). 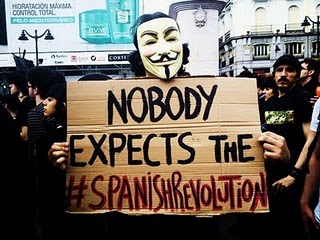 This past week we were sitting in a sidewalk restaurant with the leftist candidate for mayor of a city in Spain on the night before the election. As he got up to leave, we wished him well.

On May 15, a few activists had gathered in Puerta del Sol, a large public plaza in the center of Madrid, to protest the coming election and to register their general dissatisfaction with the situation in their country. Last year unemployment rose from 20.5% in August to 20.8% in September, the highest rate in the European Union, and probably in the developed world. Food and fuel prices had crossed a tipping point for many, where it was no longer other things that were being given up to pay for food, it was now food that was being given up.

Spain is a microcosm of the collapse phase Global Civilization finds itself in and the protest camps in many cities are an example of the bankruptcy of political ideology — it is adrift and uncomprehending. Neither the right nor the left are remotely proposing the degree of change that is needed (essentially, an end to oil addiction and a epoch of ecosystemic healing). The street protests have nothing further to offer — they are reactionary, but not revolutionary.

Spain elected a socialist government led by José Luis Rodríguez Zapatero in 2004 (and last month he announced he will not stand for re-election in 2012). Zapatero instituted liberal reforms, such as the withdrawal of Spanish troops from the Bush wars; legalization of both same-sex marriage and abortion; numerous gender equality laws; peace negotiation with the rebel ETA; unpopular tobacco restrictions; recognition of regional autonomy, particularly for the Statute of Catalonia; and the idea of an Alliance of Civilizations, co-sponsored by Turkish Prime Minister Recep Tayyip Erdoğan. What was not anticipated by Zapatero, however, was the housing meltdown; the financial crash of 2008; euro deflation along with food and energy price escalation; and all of it against a background of Spain slowly obtaining the climate (and some of the population) of Northern Africa.

For many years, Zapatero’s government ran a current accounts deficit of 10% GDP, forcing Spain to borrow 7 to 8 billion euros every month, until, by 2010, the value of Spanish government paper debt had sunk so low that lenders simply stopped lending. Zapatero had inherited the same banking crisis Obama had, and it came to a head in the burst bubble of the housing sector. The Spanish economy had been hooked on household and corporate debt steroids with not just sub-prime but negative interest rates from early 2002 until mid-2006, causing "massive overheating" in the Spanish economy, which sucked 5 million immigrant workers from Africa in 8 years. But, just as in Iceland, Ireland and the USA, chickens invariably do come home to roost.

As the EU, IMF and Spain’s lenders started to pick up the pieces of their shredded balloon, severe austerity imposed by the Banksters put 5 million young Spaniards out of work and on the streets. As in Ireland, Spain responded by moderating its social programs (entitlements), cutting welfare spending, raising the age of retirement, and chipping public pension benefits by 20%. And, as in Ireland, discontent swelled.

The medicine had some effect because the ‘Bikini Graph’ that Zapatero’s emergency measures produced ran deeper and somewhat ahead of Obama’s.
The problem is that both Ireland and Spain are trying to make major corrections to their economies while participating in a monetary union. Neither has a currency to devalue, or a central bank with capacity to print money and issue or recall bonds. Instead, both must achieve “internal devaluation” by cutting wages and prices until its accounts are back in line with its Eurozone partners.

On May 16, people wandered into Puerta del Sol to see what was going on with the protestors of the preceding day and were arrested for “illegal protest.” In response, the protests grew, and extended to rallies in central plazas of other Spanish cities. People came and camped. The police stopped evicting. It became Spain’s Tunisian Spring. Thousands are now camped out in central Madrid along with 60 other sites nationwide, creating temporary cities of the dispossessed. The mainstream media in Britain and the West have chosen to largely ignore this phenomenon,

On May 22, Spain held its regional and local elections and our acquaintence, the mayor, lost, as he may have expected to. Even though the Socialists had made real progress in setting Spain back on track, half the population stayed away from the polls and over a million ballots were turned in blank. The elections were a landslide victory for the conservative People's Party (PP) which took control of all of Spain's largest cities, including Barcelona, a Socialist base since 1979.
This is what had already happened in Ireland, with a left-leaning, green coalition alienated its base with austerity measures while being unable to control the on-barreling peak oil and climate change freight trains, so whomever was in office caught the blame for everything that was wrong — both the disease and the medicine.

While the young, unemployed protesters camped out in Puerta del Sol demanded “Democracy Real Ya” (“real democracy now”), right-wingers, some of them previously under indictment for corruption, swept the democratic vote. 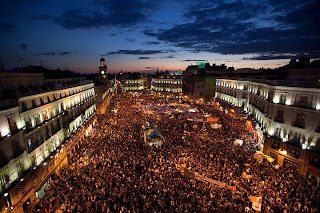 Spain is now as forked as Ireland. It not only has all the problems of a crumbling paradigm — the religion of endless growth — but it has elevated the high priests of that paradigm to its seats of power.

Will the protests grow? Yes. Will they spread to other countries? Probably. Do the protesters have an achievable goal, some realistic strategy to get their countries out of this huge bind? No.

So, good luck with all that.

what little idea you have my friend about the Puerta del Sol favela, or how partisan and biased your article is.

The gangs now sleeping at the Puerta del Sol and other plazas throughout Spain are just extreme left voters who just don't accept the results of a public vote whenever it's against them.

Luckily for Spain, the Partido Popular blasted the PSOE (corrupted center-left)on May 22nd and things will change for the better from now on.

Hi. Interesting article, thank you. One point of disagreement, Ireland's disgraced former government was not in any sense left leaning. Ireland has a strange fear of anything socialist and even using the word equality can bring the charge of extremist or commie. True the government voted in recently is even more extreme right wing than its predecesor, but that is because the population were weary of the previous governments incompetence, not its policies, though most of us in the centre or left woud have equated the two. Regards boozwatch (from Ireland)